Kate Edwards, the executive director of the International Game Developers Association (IGDA), isn’t shy. She took on the issues around Gamergate, the gamer rage controversy that started last August, in a fireside chat last week at the GamesBeat Summit. She said she was frustrated about the length of time it has taken for this issue to come to the fore: there just aren’t enough women in the game industry. But she also said that the silver lining of the Gamergate controversy was that it prompted Intel to take action. The world’s biggest chip maker announced in January that it would spend $300 million to address diversity issues in tech and gaming, and it plans to double the percentage of women developers from 20 percent to 40 percent in the next decade.

While on stage, Edwards took an interesting question from Nolan Bushnell, the founder of Atari. Bushnell wondered how to fix the problem of the lack of women in leadership in games when there were so few women and girls in the pipeline for technical careers. Sexism was the second-biggest issue in the most recent IGDA poll of industry perceptions among game developers. Only about 20 percent of the people in the game industry are women, and Intel wants to double that percentage in the next decade.

Stewart Rogers, the director of marketing technology at VB Insight, interviewed Edwards on stage. Here’s an edited transcript of their conversation. 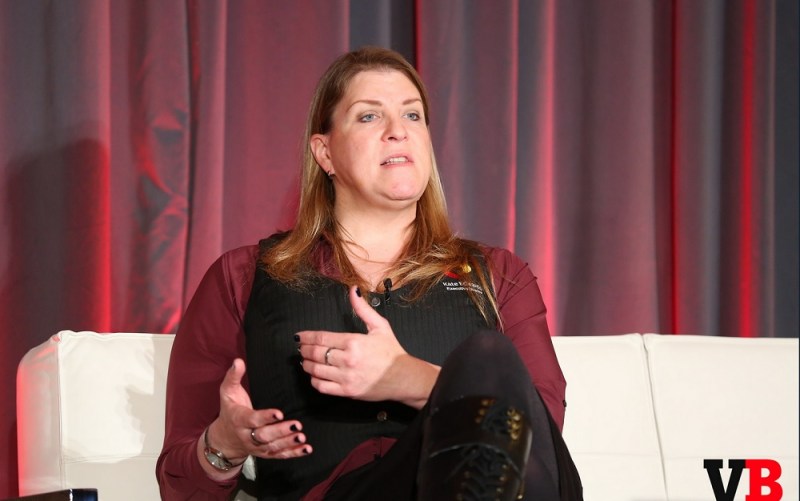 Kate Edwards: Who doesn’t know about Gamergate? Does anyone not know? Okay, there’s one person out there. Good for you!

We have a situation where we have something that can be construed as a consumer backlash against the game industry. Whether or not it’s really consumer-wide is very debatable, in fact. It’s primarily a small group of people who gathered a following around an issue related to—It started with misogyny against an independent developer. It grew from there and spread to other indie developers, almost all women. There’s a very strong harassment feed going on – doxxing, swatting, harassing them online.

It reached the mainstream press around October. It was front-page news in the New York Times. It was in the Washington Post and other major-league outlets. They were all decrying this, saying it was a horrible misogynistic harassment effort against women in the game industry.

Of course, the people who are initiating a lot of this changed their tune a bit. They said, “No, it’s actually about ethics in games journalism. That’s the real problem. Games journalism is corrupt. Game developers are too cozy with game journalists. We don’t like this.” However, the harassment still continued, mainly against women. We’ve seen some mainstream figures, actors and so on, speak out on the issue, and they wouldn’t be doxxed or harassed that much. But when you see women like Felicia Day speak out against it, within a few hours she was doxxed.

It’s been an interesting issue. It hit its peak in the fall, but it continues to this day. There’s still a vocal group out there calling itself Gamergate and using the hashtag. But it’s down to a general noise level at this point.

Stewart Rogers: One thing it has done, one thing we can take from Gamergate, is the fact that it’s opened up a conversation around diversity, and not just within the game industry itself, but in the games the industry produces. That’s where we need to move the conversation.

Edwards: Absolutely. That’s one of the most important things coming out of this. I get asked a lot, “Did anything good come out of this episode that’s been going on since August of last year?” The way I look at it, many of us in the industry have been having this dialogue about diversity, about women in games, about people of color and other representation issues in the game industry, for a very long time. For decades this conversation has been going on. Unfortunately, not much has happened with it.

I go to countless women-in-games lunches and meetups and meetings and conferences around the world. A lot of times they’re seen as the token women’s event, where women go to lunch, talk about women’s issues in the game industry, and then you can come back in the room and have a broader discussion about development and production and art. I’m not saying those events have been—They’ve been worthwhile. There’s a need for that kind of camaraderie that happens. But at the same time, generally nothing happens. It’s just more dialogue about the problem.

Yes, it’s a problem. Yes, only about 20 percent of the industry in general is women, whereas almost half of game players are women. Why don’t we see a situation where those who are making the games better represent those who are playing them? That’s the underlying goal we’re pursuing.

You have all kinds of good reasons for that, reasons for appealing to a broader demographic. Some people would argue, do you really need to have women working in the industry to make games that appeal to women? That’s not really the point. Yes, I think it would help, just like if you want more diversity in your game content, you should get more diverse people making it. They’re in a position to better understand where they’re coming from and their cultural context.

When we did our developer satisfaction survey at the IGDA – something we do every year – we asked developers, what are the key issues that you see? Why might the public view the game industry negatively? The number one issue was working conditions, which was a surprise to us. But the number two issue was sexism in the work force. The number four issue was sexism in games, with perceived violence coming in at number three. So sexism in the industry is high on the list, both in the work force and in games themselves.

What we’re seeing as a result of the Gamergate episode is that games have hit the wall. The industry has said, “Okay, we’re done talking about this issue. It’s time to do something.” 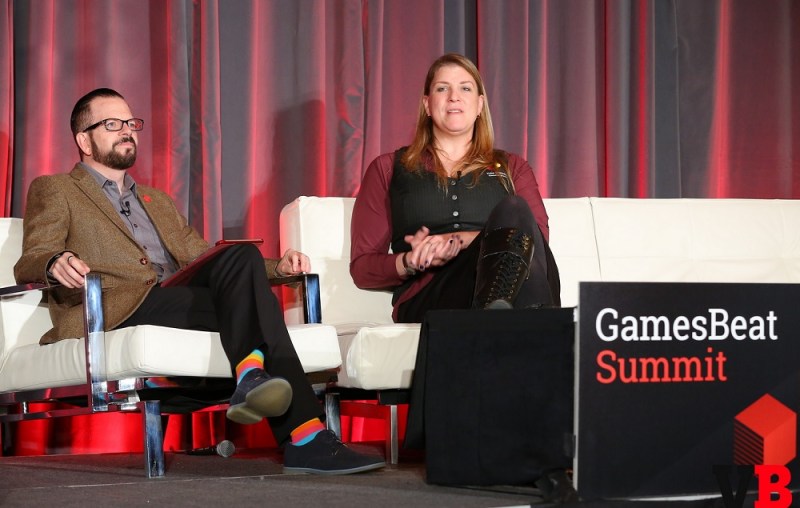 Above: Stewart Rogers of VentureBeat and Kate Edwards of IGDA

Rogers: As far as what can be done next, when I talked to people recently — over the last few years, there’s been talk of the fact that video games as an industry, from a marketing standpoint, are still something of a teenage industry. I feel it’s the same way at a number of companies. How do we mature? How do we start moving forward? We saw, in response to the recent legislation in Indiana, some very strong responses from major industry figures. Does the games industry need to stand up and make similar big, bold statements?

Edwards: Absolutely. That’s part of the maturation of this industry – the willingness to take a stand when it matters. One of my biggest frustrations is that we at the IGDA—We were one of the first organizations, if not the only one in the industry, to say something. That was two weeks after Gamergate started in August. My frustration, as I go around the industry and talk to different companies—Why aren’t you saying something?

I understand why they didn’t, because they didn’t need to from a corporate standpoint. I get it. They weren’t being targeted. Most of the targets in this situation were independent developers, and one of the reasons for that is because they’re easy targets. They don’t have a corporate legal team to protect them. They’re individuals. A lot of indies rely on things like Twitter and other social media to get their games out there. All you have to do is infect their feeds with this vitriol and it really infects them in a negative way.

I’d like to see a lot more vocalization on the industry side. When we see Mike Morhaime making a statement to open BlizzCon, that was brilliant. Be clear about where you stand as a company. Say that we’re not going to tolerate this behavior – certainly not in our user communities. The stuff that Riot is doing as far as rewarding players for calling out people are behaving negatively in their community is brilliant. It’s a great idea. The IGDA gave them an award this year at GDC to recognize their contribution to the industry. We think that step can bring positive reinforcement to any online community and help quell harassment. We want to see more stuff like that happen.

How do we have a voice, though? One of the things I was saying is that during the last nine months, that frustration, not feeling like there was solidarity in the industry—That’s something you do see in a lot of other industries. You’ll see men with a voice saying, “We’re not going to support this. We don’t agree with it.” I know it’s hard. It’s complicated. We’re talking about our users, our consumers. But at the same time, what I saw was a certain level of irrational fear. They’re saying, “I don’t want to upset the Gamergate crowd.” What? This is a small, but vocal group. Your general userbase is huge. You have millions of people playing your games. You may have a Twitter storm with this small group of people – is that something you’re afraid of? Do you want to do what’s easy and ignore it, or do what’s right and say that this harassing behavior is wrong and stand against it?

Rogers: We’re gunning for equality, and equality in the games we produce as well. Is it OK for a company to target a game at 13-year-old boys and include the kind of content that would be exciting to them?

Edwards: Generally I’d say yes. My fundamental position is that games are an art form. They’re an art form as viable as painting or literature or television and film and everything else. The creative drive every developer has should be honored. If they want to make content that might be highly offensive to certain demographics, they should be allowed to do it.

But if you want to sell your game, you’re going to be subject to market forces. Then you have to think about demographics. You have to think about the impact on your company and yourself as a developer, on your reputation. Do you want to be known as a developer who creates that kind of game, to be pigeonholed that way? I’m sure you’ll get a lot of media response, a lot of tweets, a lot of exposure. But that does stick after a while. Do you want to be the developer who’s pegged that way?