I love Mega Man. It was the first game series that I really became a fan of. My desk has a Lego Blue Bomber on it. I painted his portrait (poorly), and it hangs in my bedroom. I realize as I type this how incredibly lame this sounds. Still, the point is that I really like Mega Man.

So, the fact that Capcom is finally releasing a new Mega Man game should delight me. I’ve had friends and family forward me the news, all excited to have me type back with a barrage of happy faces and exclamation marks.

Instead, I just feel grumpy. 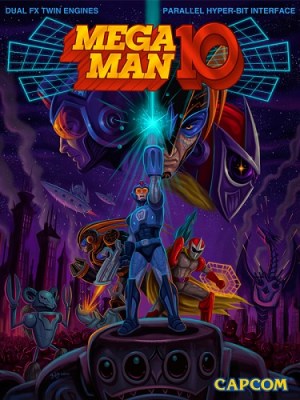 Above: Sadly, no Mega Man 10 in the Legacy Collection.

The new game is Mega Man Legacy Collection. It’s a bundle of the first six Mega Man games, which are also all of the Blue Bomber’s releases for the Nintendo Entertainment System. It comes out this summer for PlayStation 4, Xbox One, and PC, and a 3DS version comes out this winter.

Video game historian Frank Cifaldi says that this is the first effort from his company, Digital Eclipse, to curate classic games, even going so far as to note the Criterion Collection in a tweet earlier today. While I certainly won’t argue that Mega Man deserves such a treatment, I really wish this package was more comprehensive.

The problem is that Mega Man has much more than six games. It’s fine that the spin-offs (which number in the dozens) aren’t here, but the main Mega Man series has 10 entries (11 if you count Mega Man & Bass, which you should). Including just the first six feels incomplete.

In fact, Capcom released a Mega Man Anniversary Collection way back in 2004 that had Mega Man 1 through Mega Man 8 (the last two weren’t made yet). In 2015, we’re getting an even less complete collection than one that came out for the PlayStation 2, Xbox, and GameCube.

Again, these are definitely all classics (although MM2 and MM3 are probably more classic than the rest of them). However, I’m not sure how much preserving they need. All six of these games are available on the Wii U and 3DS Virtual Console digital stores. Plus, ROMs and emulators make these and every other NES game super easy for anyone to play on their computer.

While I appreciate Digital Eclipse’s sentiment, I’d rather just have a more complete collection, especially when the excellent Mega Man 9 and Mega Man 10 aren’t available on any of the platforms that the Legacy Collection is coming out on. I’d rather have them than some digital artwork, a leaderboard, and a Challenge Mode.

It’s also possible that I’m a bit annoyed just because I’m a moron who actually bought Mega Man 1 through Mega Man 6 individually on the 3DS. I also still have my Anniversary Collection for the PS2 safely stored away. I want to buy a new Mega Man game. I really do. However, an incomplete collection of games that have been available on tons of other platforms is a hard sell, even for a diehard like me.