Immersion has revealed its TouchSense Force technology for better touch feedback in games.

The San Jose, Calif.-based company has licensed the technology to a variety of companies. Among the new users is Nintendo, which launches its Switch console on March 5 with new force feedback features such as the ability to feel the sensation of ice cubes in a cub using a game controller.

Immersion said that game makers can take their products to a new level of realism by easily creating sensations of pushing, pulling, grasping, and pulsing by integrating high-quality touch effects into their games and devices.

The haptic effects can be used across a wide variety of platforms, including game consoles and virtual reality systems. Immersion has provided a plug-in for the Unreal Engine 4 game engine, making it easier for developers to craft, test, and then iterate on effects, said Matt Tullis, business development director at Immersion, in an interview with GamesBeat. 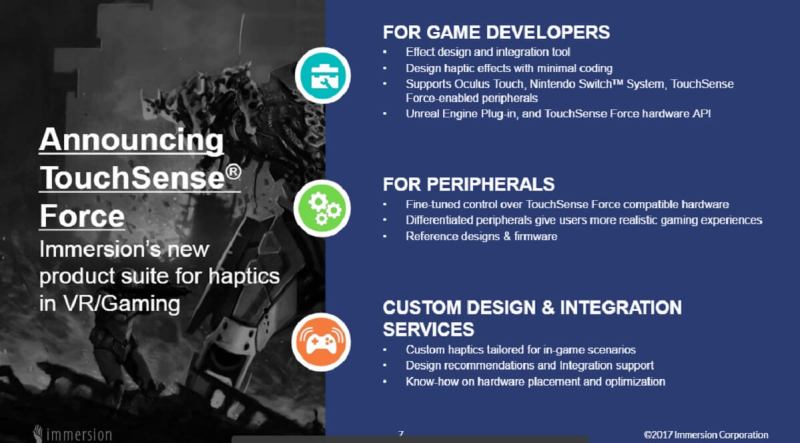 Above: TouchSense Force lets you feel more than just vibrations in games.

“The digital entertainment experience is evolving to full immersion,” said Tullis. “It’s becoming more immersive, heading to the [Star Trek] holodeck. The sense of touch transforms gaming in virtual reality. You get cognitive dissonance and it breaks the feeling of presence when you reach out and your hand goes through a wall.”

Among the effects are kinesthetic triggers featuring push and pull capabilities. Immersion is offering a reference design for peripheral makers so they can design hardware more easily. And Immersion offers firmware as well.

Immersion has a long history in the gaming industry from its early efforts pioneering rumble on the Sony PlayStation and Microsoft Xbox console platforms. For more than 20 years, it has enabled game developers to differentiate their products with high-quality touch effects.

Once adapted, game developers will be able to use Immersion’s TouchSense software suite to design haptics for games on the Switch. Nintendo refers to the technology as HD Rumble.

“The current landscape has vibration only, especially in mobile,” Tullis said. “With TouchSense Force, you could pull a trigger to fire a gun. If it pulls all the way in, you feel the gun is empty. Or if you can’t pull it at all, you can feel the gun is jammed.”

You could feel effects like recoil from rapid fire, or feel the steady pulse of a heartbeat.

“With Nintendo, you can shake a cup of ice and feel if it is one or two or three ice cubes,” Tullis said. “There’s a lot of innovation in haptics now. It feels like a golden age. I think it would be cool to do the concept of a bow and arrow.”