You can’t write about Immortals: Fenyx Rising without comparing it to The Legend of Zelda: Breath of the Wild. It’s a comparison that Ubisoft Quebec wants you to make. Immortals borrows a lot from Link’s recent masterpiece, including a focus on exploration in a large open world.

But so what? We’ve had dozens of games mimic past hits, like Halo, Call of Duty, and Hearthstone. It’s just how the game industry works. Heck, it’s how all media industries work. As long as the derivative work offers some new ideas or manages to capture some of the original’s essence, then I’m fine with it.

Immortals: Fenyx Rising, which comes out December 3 for PlayStation 5, Xbox Series X/S, Switch, Stadia, PlayStation 4, Xbox One, and PC (I played on Xbox Series X), manages to do both of those things, even with its questionable attempts at comedy.

At first, Immortals is so similar to Breath of the Wild that it’s almost distracting. You have the same stamina bar mechanic, which measures how long you can do things like sprint or climb. You have an ability that lets you levitate and throw certain items. You can glide through the air. Much of the game focuses on exploration, and your rewards give you items that help you increase attributes like your maximum health or stamina. Rifts dot the world, and entering them brings you to a self-contained area that focuses on combat or puzzles … exactly like the shrines and Breath of the Wild. 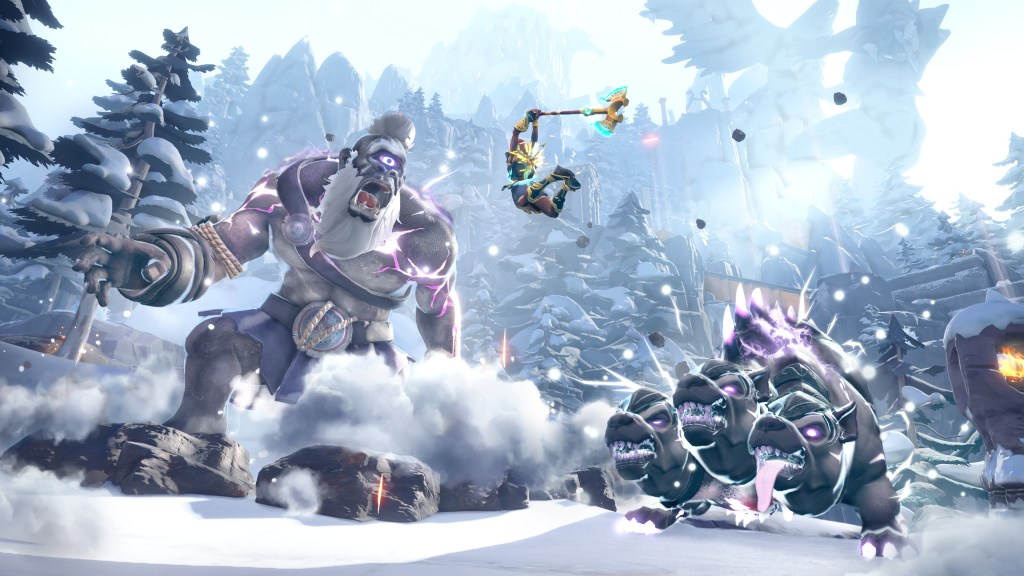 Above: The game has gods and monsters.

However, Immortals does stand out in some ways. Its combat is a good deal faster-paced. It focuses on dodging, countering, and stunning enemies with heavy attacks until you stagger them. Fenyx is also a bit more agile than Link, and many of the game’s puzzles take advantage of Immortals’ solid jumping mechanics.

Immortals is also less freeform than Breath of the Wild, a game that had crazy physics and chemical reactions that let you mess around with things like fire, lightning, kinetic motion, and gravity to travel and beat down your foes. Puzzles and combat are more strict here. Each challenge has a solution that the game wants you to use, and that’s almost always how you’re going to have to go about it.

At its core, Immortals will be appealing for the same reason so many people enjoyed Breath of the Wild. It offers a giant world that you can explore with few limitations on where you can go. You can spend hours just doing side activities, all of which are fun. Some have you shooting arrows through hoops, à la Odysseus. Others have you figuring sliding puzzles, while some will just test your combat abilities. You can find a good deal variety throughout the world. 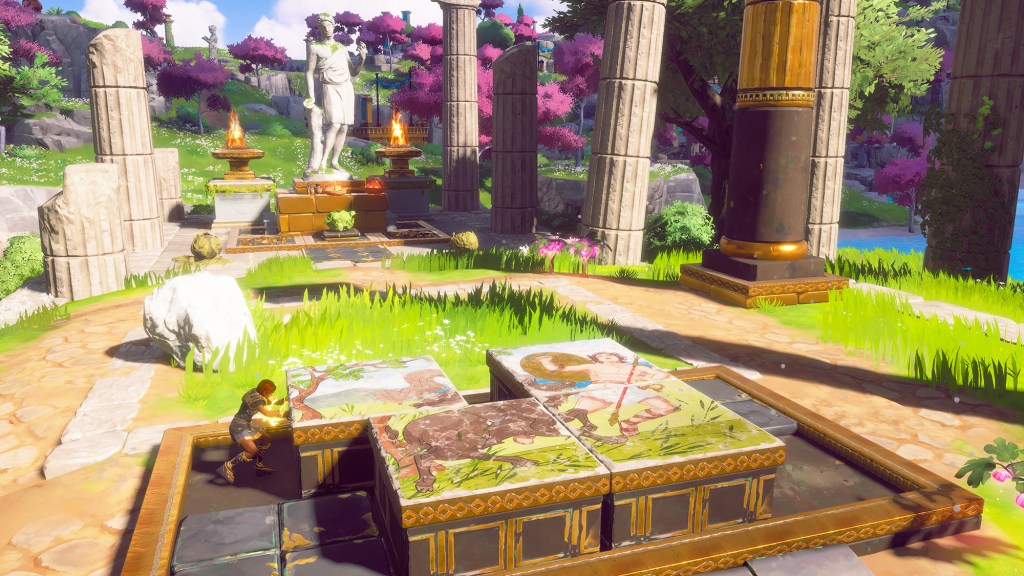 Above: I moving block puzzle that I don’t hate.

You also have the main quest to go through, which has you rescuing Greek gods so you can enlist their help in defeating the monster Typhon. This gives you a good excuse to travel out to every corner of the world, and it’s always fun to enter a new area, see a giant god or goddess statue, and then scale up it so that you can start a new part of the story and begin scouting out landmarks and activities.

The world is big and fun to explore, but I’m not crazy about Immortals tone. It’s a comedy. It bombards you with sarcasm, puns, and jokes. I never found much of it funny.

A lot of this attempted humor comes from the narrators, the titan Prometheus and father of the gods, Zeus. They bicker back and forth and insult each other, with much of the attempted humor focusing on Zeus’s arrogance and poor relationship with his family. It’s all more annoying than it is funny.

Some of the game’s antics are at least a bit amusing. It was fun to see Ares, the god of war, transformed into a cowardly chicken. But even during parts that should be funny, the characters’ animations and faces just aren’t expressive enough to make it work. This is actually a complaint I carry over from this Ubisoft team’s last game, Assassin’s Creed: Odyssey. The characters, despite strong designs, feel lifeless and awkward in motion. 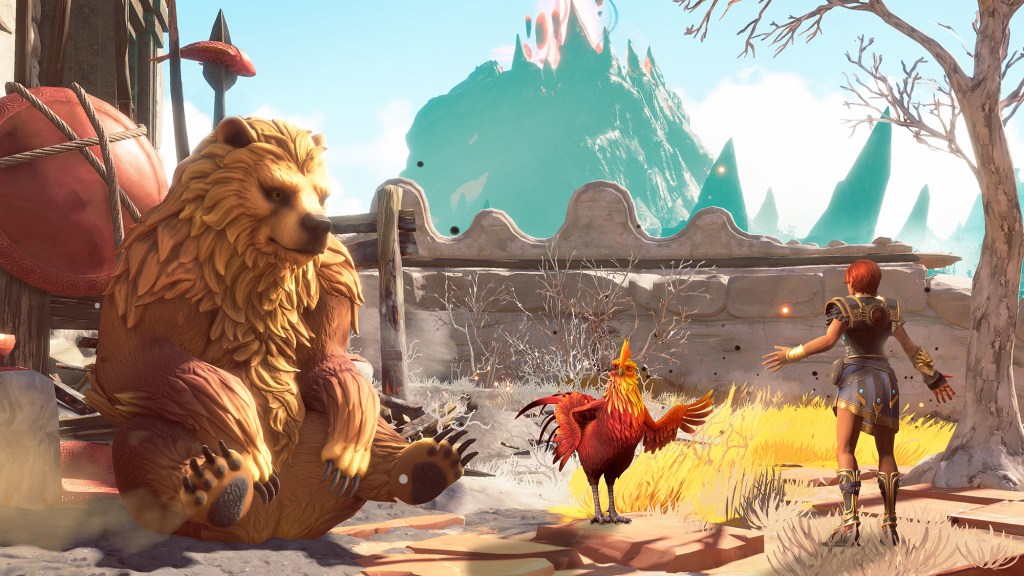 Above: The God of War is a literal chicken.

If nothing else, I do enjoy all of the goofy animations Fenyx has for opening for treasure chests.

Its attempts at humor may flop, but Immortals succeeds at being a fun and engaging Breath of the Wild clone. It controls great, and its map is huge and filled with treasure to collect.

Immortals is not a masterpiece like the game that it takes so much inspiration from, but it is ambitious and impressive in its own right. It feels good to play, and it gives you a lot to play with. It won’t be the unforgettable adventure that Breath of the Wild is so for so many, but Immortals still offers a journey worth taking.

Immortals: Fenix Rising comes out on December 3 for PlayStation 5, Xbox Series X/S, Switch, Stadia, PlayStation 4, Xbox One, and PC. The publisher sent us a code of the Xbox version for this review.