The new developer kit, known as Oculus Rift DK2, is available for preorders now and will ship to developers in July. The goggles can now do a much better job of giving you a sense of presence, or that you are immersed inside a virtual world. The technology represents a lot of progress and shows that Oculus is still striving to be the frontrunner in providing high-quality virtual reality experiences for consumers.

“This delivers fundamental building blocks that weren’t there before, like six degrees of freedom and low persistence,” said Brendan Iribe, chief executive of Irvine, Calif.-based Oculus, in an interview with GamesBeat. “We’ve made huge improvements of heavy R&D over a year.”

We’ll explain those terms in a bit, but they basically means Oculus can now deliver great virtual reality that will make you feel like you’re in another world without making you sick.

The company has competition from other startups as well as Sony, which announced its Project Morpheus virtual reality goggles last night at the Game Developers Conference. Oculus VR is also showing its new kit at the GDC. 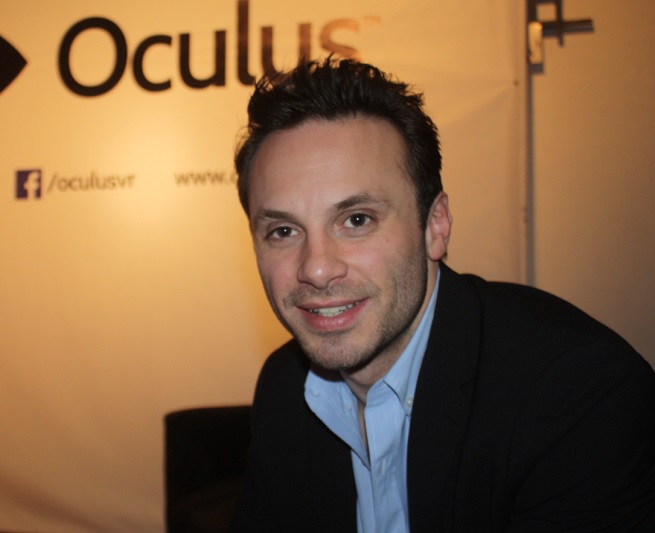 Above: Brendan Iribe of Oculus VR

Oculus VR showed off a couple of the features of the kit in Las Vegas in January at the Consumer Electronics Show. It has built-in positional tracking, which gives the players orientation in space. You can turn your head from side to side or up and down. The system will know which way you are looking. That positional tracking is necessary for great virtual reality.

The second main feature is that there is no motion blur, thanks to a breakthrough known as “low persistence.” It reduces the interaction delays, or latency, down to just 2 or 3 milliseconds, compared to 50 or 60 milliseconds of delay on the first developer kit. The DK2 has a low-persistence organic light-emitting diode display (OLED) with a 100-degree field of view.

“The image only stays in your retina for a short time before it turns off and then advances to the next frame,” Iribe said. “When you do that, in sync, you get a natural movement. You can track objects, and it doesn’t become a blurry, smeared mess.”

I tried it on and immediately noticed that the quality was better, the movement didn’t make me seasick, and the positional tracking was good. The screen displays images in a high-definition resolution of 960 x 1080 per eye, with a refresh rate of at least 60 frames per second. The images were sharper, but they are still pixelated, where you can see dots on the screen. It’s like you’re looking at the world through a screen door.

Iribe acknowledged that the pixelation is distracting and it won’t be in the final product. He said that Oculus now has other prototypes in its office that will completely eliminate the pixelation.

Still, there was no motion blur, and it looked much better than the year-old Developer Kit 1. I used the dev kit to play a short demo, dubbed Couch Knights, created by game developer Epic Games. You can immediately drop into a virtual living room. You control a cute, diminutive knight. You can fight with another knight in the modern living room and jump around the environment. I had a few sword fight battles in the living room and felt fine afterward.

Oculus raised $75 million from investors that included Andreessen Horowitz in December. Iribe said the company won’t ship until it can deliver a great experience and there is little risk it will make anyone seasick. But DK2 will enable developers to start making games for consumers.

“We feel confident the second developer kit gets us close, but we’re not there yet,” Iribe said. “This is close enough for developers to get started on games.”