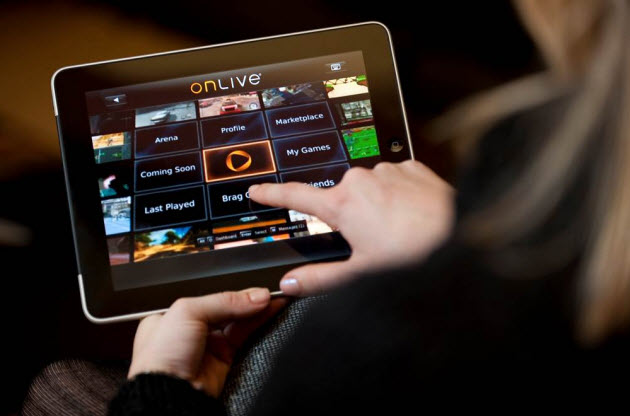 OnLive is announcing today that a limited version of its online game service is now available for the iPad and a beta version for Android devices will soon be available. Not only will you be able to watch live video games in action on the iPad. You’ll also be able to use the OnLive app to run Windows 7 apps on your iPhone. 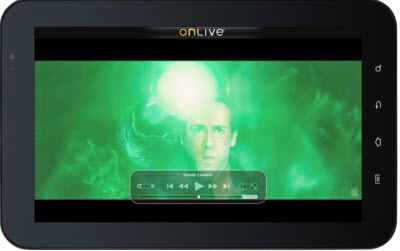 You can’t actually play OnLive games on the iPad as you can on the PC or the TV, but that’s just because there are no touchscreen-enabled games available yet. For now, users can spectate games as they’re being played live. They can also communicate with their game friends and shop for games. But the availability of Microsoft’s Windows 7 operating system apps — demoed for the first time live at the D: Dive Into Mobile conference in San Francisco today — could be truly groundbreaking. It shows that OnLive’s ambitions — in allowing server applications to run anywhere on any computer — go far beyond gaming.

“This is just the tip of the iceberg for what you’ll be seeing from OnLive,” CEO Steve Perlman said. “The Windows 7 implications are monstrous.”

Parallels, which makes desktop virtualization software, can also make Windows 7 applications run on an iPad, using its Parallels Mobile app. OnLive will give Parallels some serious competition. The question will ultimately be, who can run the Windows 7 apps on other non-computer platforms with the best possible performance.

The version of OnLive for tablets — a free app — is just the latest in a series of accomplishments for the Palo Alto, Calif.-based company. In June, OnLive launched its games-on-demand service for the PC after eight years of development. It allows users to play games that are computed in servers in centralized data centers. Since the heavy-duty computing is done in the servers, only the game visuals are streamed to the user, who can play the game on a low-end computer. 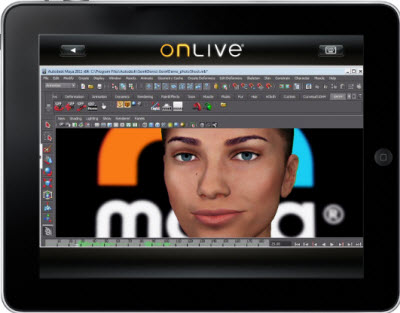 Then last week, OnLive began shipping its MicroConsole, an adapter that allows users to play high-definition server-based games on their big-screen TVs. And yesterday, Perlman said that OnLive will begin offering movie services next year to supplement its game business. In an interview with VentureBeat, Perlman also said that OnLive will run on the iPod Touch and iPhone platforms, once the software has been adapted to allow for touchscreen interaction with larger icons.

With the new tablet version of OnLive, users will be able to monitor their friends’ games while on the go. They can access their accounts, engage in live chat, and watch tournaments in action. They will also be able to play OnLive games on their iPads once game publishers make touchscreen versions of their game available.

The OnLive Viewer app is immediately available for the iPad. Meanwhile, OnLive is showing off a Samsung Galaxy Tab tablet running a version of OnLive in a beta test on the Android operating system. Andy Rubin, who co-founded Android with the help of Perlman and then sold it to Google, said that OnLive has been able to adapt its service to Android in a very short time and the combination is “extremely powerful.” 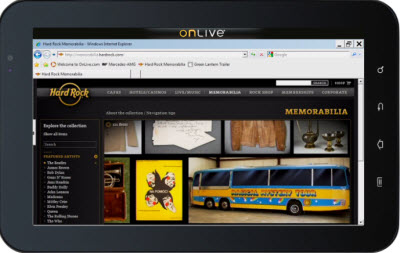 In an interview, Perlman showed me how the new version of OnLive can enable high-end enterprise applications to run on an iPad. It can run Autodesk’s Maya animation software, Adobe’s Flash, and Microsoft’s Silverlight software. But the real stunner is Windows 7 Touch version running on the iPad and on Android. The demo marks the first-time that high-end apps have been adapted to run on the iPad and Android platforms. I saw the Windows 7 technology demo working fine, but it isn’t clear exactly when that capability will be available.

Perlman says that the OnLive Viewer mobile app is the last piece of the puzzle to unify the worlds of TV, computing and mobile apps through a cloud-based platform.
OnLive investors include Time Warner’s Warner Bros. movie studio, Autodesk, Maverick Capital, AT&T, British Telecommunications, and The Belgacom Group. In its last round, OnLive was valued at $1.1 billion. The company has more than 200 employees.