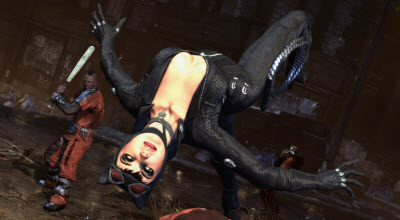 The newest Batman Arkham City video game will feature a dynamic duo surprise: Batman and Catwoman teaming up to fight the thugs of a benighted city together.

Batman Arkham City is the latest superhero game from Warner Bros. Interactive Entertainment. And from what I’ve seen of this game, the surprising thing is that it’s going to be very good, despite the fact that it’s a superhero game. It’s another example of what I would call blockbuster quality, where a game developer has doubled down to make its game outstanding. It’s all part of Warner’s master plan to hit the next level in games which we wrote about last year.

The game is being developed by Rocksteady Studios and is the sequel to Batman Arkham Asylum, which featured Batman and the Joker battling it out inside an insane asylum. The game was released in 2009 and was one of the surprise hits of the year, earning an aggregate review score rating of 92 out of 100 on Metacritic. The game was a great rebirth for the superhero game genre that had seen one dud after another. Its appeal was that it was an intense and brutal game that put Batman in a scary psychiatric ward and forced him to move among the shadows in order to survive against the Joker’s forces. 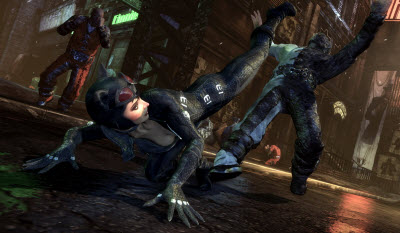 In the demo I saw of the new game, Batman Arkham City has the same kind of attention to detail that made the last game a hit. Batman takes to the rooftops of the fully-built city and swoops down on unsuspecting enemies with bone-cracking attacks. There are street lamps-a-plenty casting cool lighting effects, but the darkness is your friend in this game.

In part of the game, Batman has to rescue Catwoman from the villain Two Face. Then you have to play as Catwoman in order to fulfill the full narrative thread of the story. Catwoman has different abilities from Batman, like the ability to crawl across ceilings and strangle guards with her legs.

The world of the game is big, about five times the size of Arkham Asylum. You can glide around with Batman’s cape and just admire the outstanding 3D graphics of the city. It’s quite satisfying to drop down on villains and take them out with a stealth move. But once you get into a brawl, you have to keep punching in all directions until everybody hits the floor.

The game will be on display next week at the E3 trade show in Los Angeles.