Monetization network Appnext has found that 10 to 30 percent of revenues for social titles are coming from in-game advertising. That means advertising in social games is no longer something that developers can forget about or ignore.

Tel Aviv, Israel-based Appnext provides a vehicle for in-game advertising via its own ad network. Historically, ads have been a small part of social titles. When Zynga first began reporting its revenues in late 2011, ads were less than 10 percent of the social-gaming company’s revenue. The growth of ad revenue is important across the whole industry, particularly as some platforms are losing their audiences to mobile releases.

“It’s a myth that ads don’t work in social games,” said Tal Perry, vice president at Appnext, in an exclusive interview with GamesBeat. “You just have to do them right. We believe that ads can become a major source of revenue.”

Perry said that early ads were intrusive, popping up in the middle of a game and distracting players. The ads were often not contextually relevant, and many were simple banner versions on the edge of the screen, which most people ignored. Developers were also concerned that the marketing units would drive players away. 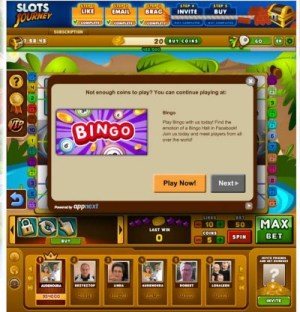 Above: Another in-game ad unit.

But casual gamers who play social releases don’t always spend a lot in free-to-play titles. Maybe 1 to 2 percent of players will purchase virtual goods with real money. That means companies can only generate money from the rest of the population through ads.

Perry said that Appnext has learned from this, creating interactive in-game interstitial ads. These units trigger at natural breaks, like when players finish a session, fail a level, or run out of virtual currency. Also, the company advertises relevant games in a content-recommendation format. That makes for a better overall experience and improved results.

“With Appnext, we’re seeing the advertising share of our total revenue significantly increase, more than doubling advertising’s share of revenue over the last few months,” said Francois Pacot, CEO at developer Royal Cactus. “Thanks to Appnext, advertising is now a serious revenue stream for Royal Cactus.”

Appnext creates its units in HTML or Flash formats and serves dynamic content during natural game breaks. The ads have clear descriptions, so it’s not a “blind click.” Players know what they’re getting, Perry said.

“Advertising is becoming a major source of revenue for us, doubling over the last six months,” said Simon Smiley, chief operating officer at game developer BeJig.

In the first quarter of 2012, ad revenue was 9 percent of the total revenue from Zynga customers. That grew to 12 percent in the second quarter of 2013.

Appnext has 15 employees and started operating in 2012. The company is self-funded with a couple of million dollars raised to date. Rivals include Chartboost, Lifestreet Media, PlayHaven, NativeX, Tap4Tap, and LeadBolt. Appnext’s founder is Elad Natanson, a serial entrepreneur in gaming, advertising, and online companies.