The writer backed Pillars of Eternity on Kickstarter but used a publisher-provided code for the review. –Ed.

Forty-four hours in, I’m still marveling at the freedom that Pillars of Eternity gives me.

This Kickstarter darling (this ode to old-school role playing is the No. 2 most-funded video game project of all time on the crowdfunding site) has been in the works for more than two years. Coming from Obsidian Entertainment (Neverwinter Nights 2, Fallout: New Vegas), Pillars of Eternity is representative of the studio’s even earlier work … when many of its members worked for Black Isle, making Icewind Dale and Planescape: Torment. All of these games have one thing in common: They’re all licensed worlds.

But for the first time, Obsidian has made a world of its own, not a universe belonging to other companies. While it certainly took inspiration from other role-playing games, the studio created original systems, races, and lore. Your character encounters a mystical storm, and through it and the actions of a mysterious man, become a Watcher, one who can peer into the souls and memories of others. As you dive into the story, this idea of the soul threads into many quests and conversations. At times, you feel like you’re interacting as much spiritually as you are physically with the world and its inhabitants.

And in doing so, it created a fascinating world, where new ideas buck traditional ways of doing things and where a person’s soul — and memories of the past — could mean the difference between survival and death. 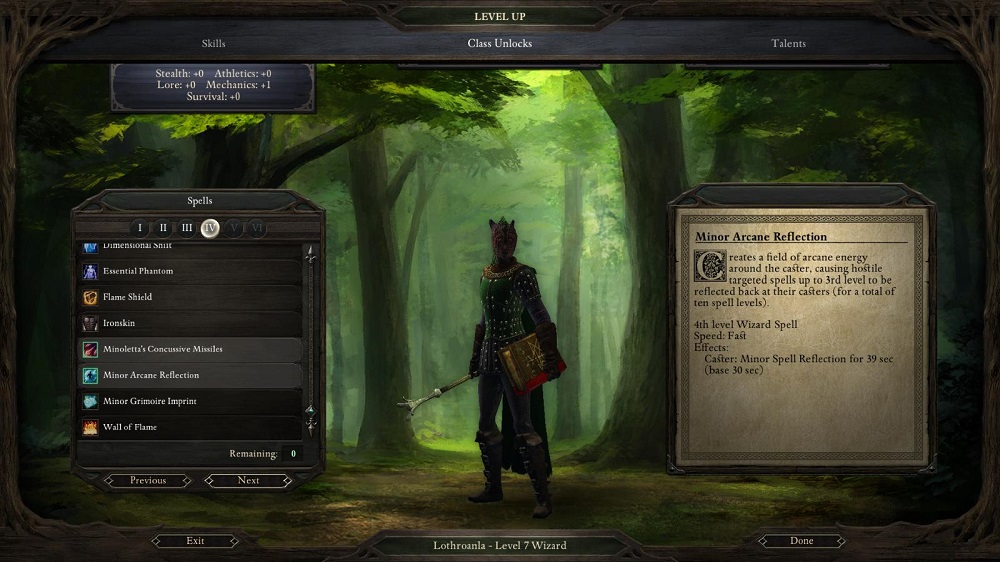 Above: When you level up, you can choose more than just spells and stats — you get abilities as well at different levels.

Your characters, your way

Don’t care for the party members you find as you make your journey? You can create other party members in the taverns and inns you visit — and in your own stronghold.

I availed myself of this a couple of times: Early on, I needed a tank, so I created an Aumaua (think orc but cultured, smarter, and not evil) fighter to help my mage and his lone companion, another wizard, to get through the early hours. That warrior’s still part of my roster, now handling quests on her own that come in through my stronghold. Later, I realized I had no rogues, so I rolled up an Orlan (Pillars’ take on halflings).

This also gives you a handy way to experiment with different classes without starting a new playthrough — or have a little fun and see what it’s like to fight that nest of reptilian Xaurip (Obsidian’s homage to the lowly but beloved Kobold).

You learn early on that your choices can lead to the life and death of those around you. In Pillars of Eternity, your decisions are important.

Helping one faction in the city of Defiance Bay results in closing off interactions and quests with another. You can decide who rules in a dispute between a lord and his dissident cousin, whether you assist in helping someone craft walking suits of armor filled with souls. Investigating a mysterious church leads to attacks from assassins.

You learn to read the text of each conversation carefully to see how your decisions shape your story — and the world around you. 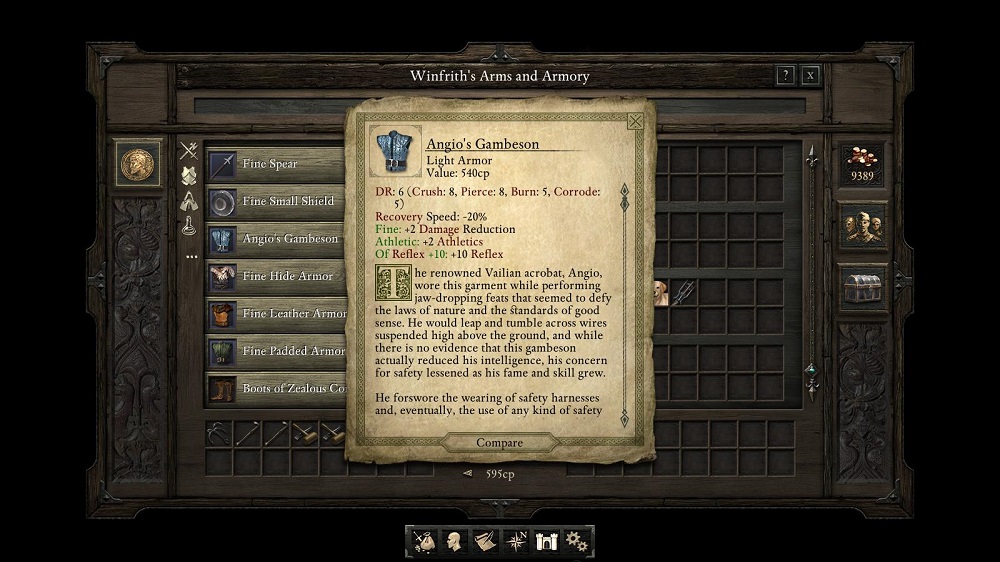 Pillars of Eternity ditches the Armor Class system of other RPGs. Instead, attacks go up against four different defenses: Deflection, Fortitude, Reflex, and Psyche. You character’s attributes (like Might or Constitution), class, and items all factor into these defenses. It’s not just solely the armor you’re wearing that determines your defense, and spells can improve it as well.

Where heavy armor comes into play is with damage reduction. Plate armor and the like take a bigger bite out of the incoming damage (which comes in eight forms) from a foe’s attack. Take a piece of brigandine, a heavy armor. It has a damage reduction of 12, but it is also stronger against crushing damage, with a DR of 15. But it’s weaker against corroding damage with a 7. The price for wearing such protection, through, is a penalty to your recovery time — heavier armor means longer waiting times between taking actions.

I appreciate how this system does a couple of things. Its applications go deeper than merely needing blunt weapons to fully damage skeletons or how a fire elemental is resistant to, well, fire. And it gives you more choice on how you create your own character. Want the mage who throws fireballs while peering through a helm atop a set of heavy plate armor? Go right ahead — just be sure you’re willing to deal with the drawbacks of wearing such mail.

The only real problem has been pathfinding — something that Pillars of Eternity’s forebears, the Infinity Engine games (Baldur’s Gate, Icewind Dale, Planescape: Torment), struggle with as well. All of your characters will march in formations that result in one character (and so far, it’s been just one character with me) taking the path you didn’t set. It can be annoying, especially when you instructed your party to walk around a trap and one blunders through it because of this. (Though, what are you doing not paying attention when one of your heroes is walking near a trap!) 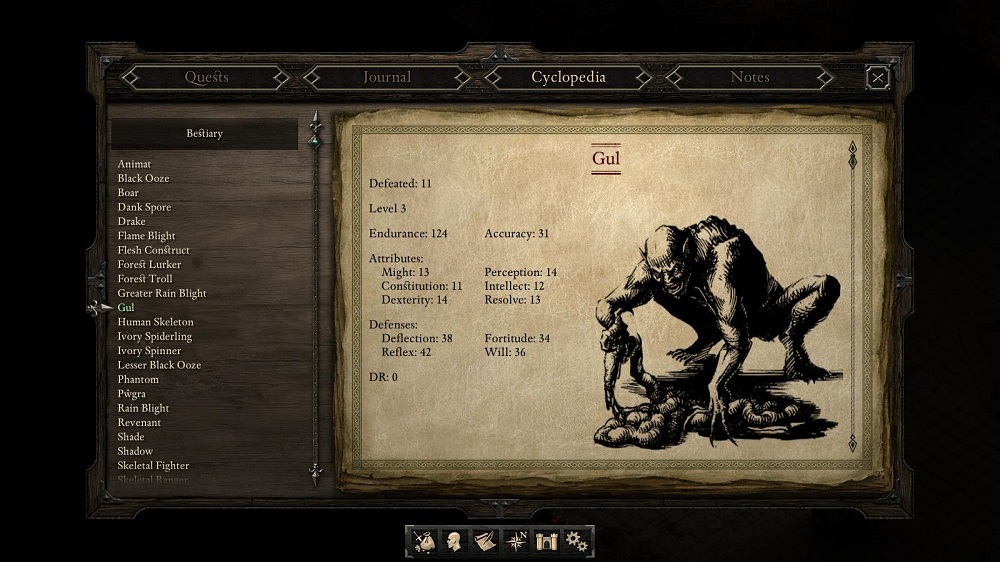 Above: The artwork for the Bestiary looks right out of a 1st edition AD&D Forgotten Realms book.

This is the first time I’ve played a video game with designer commentary, and I recommend doing so, especially for a rich RPG like Pillars of Eternity.

If you walk into an area that has developer commentary, a window will pop up telling you who’s talking as you learn about the location you’re in and how Obsidian’s team went about creating it. You may also hear how a certain location or individual fits into the lore. It’s a welcome addition, and I’d love to see this in more RPGs.

The defenses take time to learn

While I do appreciate Pillars of Eternity’s take on armor and defense, it does take some time to learn it. The system isn’t good at filling you in on the nuances — it’s something most players will pick up as they play and experiment with different loadouts.

But it’s something you can pick up after some time reading up on the different damage types and resistances and what they mean.

Too many quests end in killing

I tried. I really tried. But I couldn’t help it. Too many of my dialogue decisions resulted in me slaying the people I talked to.

I didn’t want to kill them — but they would end up attacking me even if I didn’t purposefully antagonize them (like threatening to attack them). I liked the overarching theme of how souls and the past factor into the world, but I don’t necessary want to end up too many quests by freeing a person’s soul from their body. 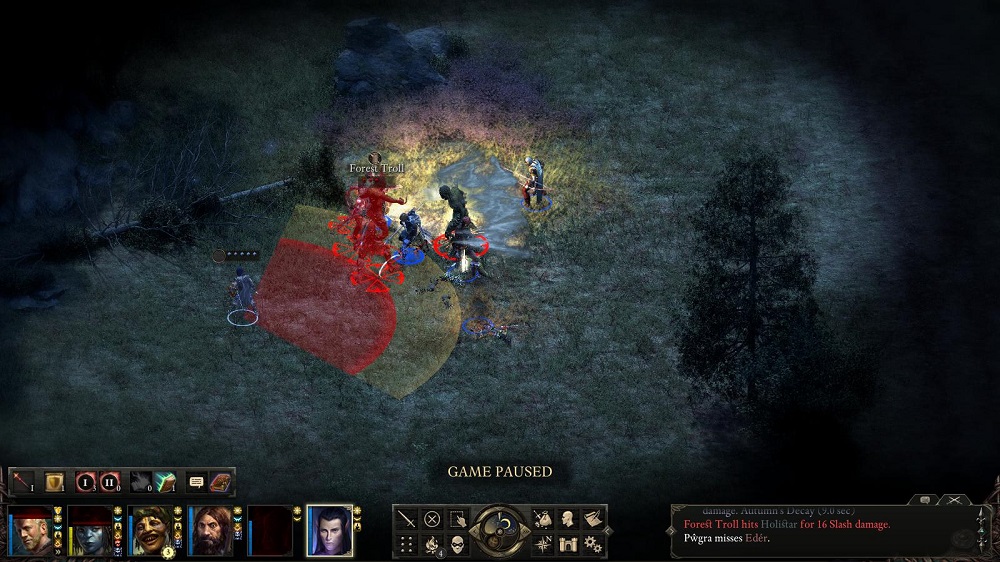 Above: While you end up using violence to solve too many quests in Pillars of Eternity, I don’t mind slaying trolls.

Pillars of Eternity makes you think about your actions and the consequences they have on the world. It’s full of strategic combat, making crawling around a dank dungeon a tense and satisfying journey, not a slog, and giving a deeper layer to how you approach combat thanks to an armor system that challenges, not restricts, you.

It also asks you how you want to play — how you want to compose your party, how much interaction you want from your companions, and what sacrifices you’re prepared to make in order to reach your goals.

And even after 44 hours, I still feel like I’ve got a great deal to learn about Pillars of Eternity’s world, the first Obsidian has crafted from scratch. And isn’t that what role-playing fans want from their games?

Pillars of Eternity is available today for PC, Mac, and Linux. Publisher Paradox Interactive provided GamesBeat with a digital PC code for the purposes of this review.