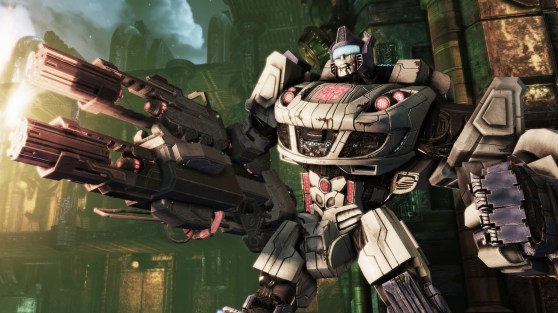 The first Transformers toys came on the market almost 30 years ago, so why has this brand of toy robots captivated kids (and adult kids) for so long?

Like the robots themselves, the Transformers brand has never turned away from doing something else. After the original toy line and cartoon started to lose popularity, Hasbro introduced new toys in slightly different colors. As people got tired of that, they created a new computer-generated cartoon where the robots turn into animals. Then came more cartoons, more toys, and finally Michael Bay’s series of awful movies. They all feature the same core similarities, but they are all different in some way. While being recognizable as something Transformers-related, they still changed things.

It is fitting, then, that the greatest strength of Transformers: Fall of Cybertron is the way that it embraces this desire for change. Almost every level in the campaign focuses on a different character, each character has distinct abilities that require you to constantly alter your playstyle, and each character has their own goals and motivations that drive the plot in several different directions.

Also, each character can literally change into a different thing at the press of a button. But that’s a pretty obvious one. 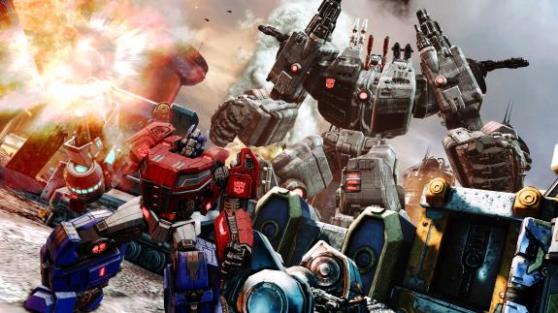 Set directly after the events of 2010’s War For Cybertron, the game opens with the Autobots’ fighting off a Decepticon attack on their ship as they approach a space portal of some kind that will, hopefully, transport them to a planet that is more suitable for sustaining life than their own. Just as things for the Autobots are looking hopelessly dire (Decepticon leader Megatron is pointing a giant gun at Autobot leader Optimus Prime), the game flashes back to a few days prior to illustrate how everyone got to that point.

From there, the game splits each of its chapters into a smaller subplot that detail how a different character spend their final days on the planet Cybertron. Optimus needs to destroy a series of Decepticon artillery guns with the help of city-sized robot Metroplex, Cliffjumper investigates what Decepticon scientist Shockwave is working on, and Starscream has to find a way to maintain command of an increasingly frustrated army that would rather kill him than follow him. Each of them views the same conflict from different angles, which — here’s that theme again — changes how you look at the war. It’s rare for a shooter to force you to see things from the point of view of an enemy faction you’ve spent half the game mowing down, but that’s what happens in Fall of Cybertron.

Also, the game embraces one of the most appealing (yet overlooked) aspects of the original cartoon: the careful balance between serious war story and the inherent ridiculousness in alien robots that are also cars. Oddly enough, it’s the Autobot side that seems to skew toward the grim and gritty this time around, with the traditionally cruel and evil Decepticons providing the occasional comic relief.

Fall of Cybertron is, at its heart, Gears of War without the cover mechanics — at least in terms of how the shooting works. It’s nothing special, but it’s perfectly functional. It has a few clever weapons that are fun to use (one that shoots electricity that is excellent for clearing out a room of insect robots), but it’s almost always a better idea to use the more straightforward options (shotguns, sniper rifles, and so on.).

However, what redeems the combat is the same thing that makes this a Transformers game: You can turn into a car/truck/jet/tank whenever you want. No other game out there gives you the mobility options available in Fall of Cybertron. In the middle of a big gunfight and need to run away to find some ammo? Transform. Need to get somewhere fast? Don’t use the Gears of War-esque roadie run. Just transform.

Then there’s the multiplayer mode, where the mobility options you have in the campaign are given to everyone. If that doesn’t seem like a big deal, just look at any other game ever and think about what would happen if you could turn into a jet and fly away at any moment. It has the potential to completely change every enemy encounter, whether you’re playing online or off.

Once again, the strength comes in the form of encouraging you to change at every opportunity.

If you don’t know the difference between Unicron and a unicorn, feel free to skip ahead to the next section. This is just for the nerds.

While the developers at High Moon were evidently very careful to make Fall of Cybertron a game that anyone could enjoy —  regardless of Transformers-related knowledge — they are still fans of the brand, and it shows. The devs included countless Easter eggs and nods to the original cartoon, not to mention several direct quotes lifted from the original animated Transformers movie. Basically, if you’ve ever accused someone of being full of cesium salami, you’ll get plenty of nostalgia-fueled smiles out of this game.

The Transformers’ three-decade history is one of the brand’s greatest assets. The characters that Hasbro created back in the ’80s are so simple and archetypal that it’s no wonder they’ve become iconic. When the same voice actor who portrays Optimus Prime in the cartoon returns for the game, or when Starscream demands to know who is disrupting his coronation ceremony,  it doesn’t feel like pandering. It feels like High Moon is proving how much it understands this franchise. This might not seem like a big deal to someone who isn’t already a Transformers fan, but it goes a long way toward explaining why so many people are. 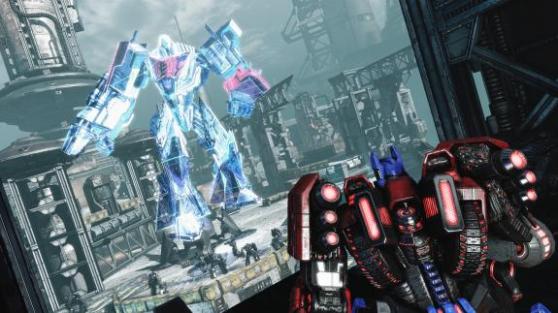 It has a few hiccups

While I didn’t encounter anything that broke the game, a few technical glitches stuck out. Near the end of the game, I ran into a lot of situations where the game would prompt me to hit a button, but the text wouldn’t actually appear, or maybe the text would appear, but hitting the correct button would do nothing.

It also has a fair amount of texture pop-in, where a level would begin and my character would look like a muddy pile of clay for a few moments before everything had finished loading properly.

It can get a bit shallow

People prone to using clichés will remind you that “a rolling stone gathers no moss.” Now, let’s replace the stone with “a robot that is also a car” and the moss with “depth” and we’ll see the one big downside to the game’s penchant for constantly changing. Since you’re always doing different things, the game never spends enough time on any one thing to really elaborate on it.

A good example of this is in the level where you play as Grimlock, the space T-Rex. Unlike every other character, Grimlock’s combat is all melee-based, and he cannot transform whenever he wants, only when he has caused enough destruction to fill a special meter. The Grimlock stage is the most radical change in all of Fall of Cybertron, but once you get the hang of hitting guys with a sword or picking them up and throwing them, it starts to feel a little light. It’s still fun, and it would take a long time for the appeal of playing as a giant robot dinosaur to wear off, but after a while you’ll be wondering if that’s really all there is to it.

The problem is most pronounced in that specific level, but it does pop up in a lot of the others. It forces the game to rely on its plot and the hook of how fun it is to transform, but if the game were any longer than it is, this shallowness would bring it down more and more.

Aside from some minor technical problems, Transformers: Fall of Cybertron is a great game. The reason it is great is not despite its connection to the long-running toy line, but because of it. It’s great because it embraces the same idea that made Transformers popular back in 1984 and has kept them popular ever since: It changes.

The gameplay doesn’t stay in the same place for too long, different characters require different strategies, and the storyline necessitates a willingness on behalf of the player to embrace change along with it. Sure, since the game is constantly on the move in every possible way it means that any one aspect might be a little too shallow, but who cares? In a few minutes you’ll be doing something different…but just as fun.

If Fall of Cybertron has one lesson that it’s trying to convey, it’s the same thing that players will quickly learn upon trying out the multiplayer mode: Keep moving, adapt, and be willing to change. Otherwise, you’ll probably blow up.

Transformers: Fall of Cybertron was released for the Xbox 360, PlayStation 3, and Windows PC on August 24. The publisher provided GamesBeat with an Xbox 360 copy of the game for the purpose of this review.