It took 18 months to cook, but Nukebox‘s Food Truck Chef mobile game has come out well done. The game generated more than 3 million downloads in its first 10 days, and the Indian developer said it is on track to make $500,000 revenue in its first 45 days.

Food Truck Chef is available on Android and iOS, and it has been the No. 1 casual game in the U.S. and more than 100 countries, said Amit Hardi, the CEO of Bangalore-based Nukebox Studios, in an email to GamesBeat. That’s a rare hit for an Indian game company, and it shows that country is climbing the food chain in the $109 billion global game business.

Nukebox started as a studio about three years ago. It churned through as many as 15 ideas for games, and it trashed them. But once it came upon the food truck concept, it went to work on it for 18 months. The work is paying off. It has a rating of 4.5 stars out of 5 on the app stores, with tens of thousands of ratings on Google Play and iOS. People have downloaded Food Truck Chef about once every 5 seconds since its release on iOS on July 25 and Android on August 17. All told, it now has more than 4 million downloads. Hardi believes the company could break even on the game within a couple of weeks. 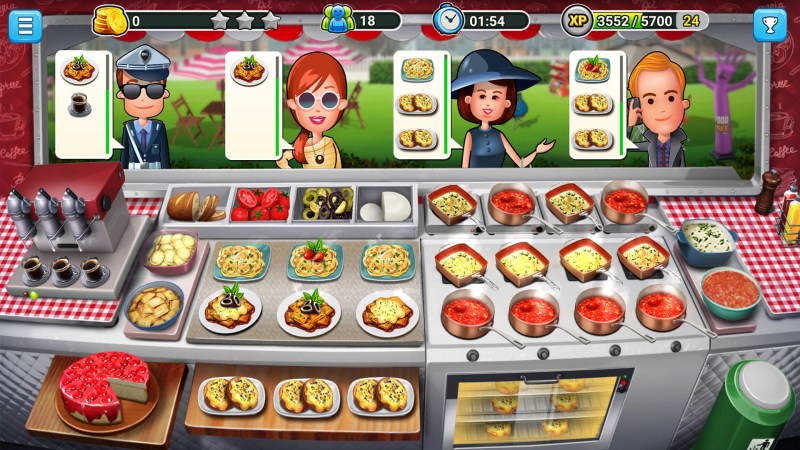 Above: Food Truck Chef is like Cooking Dash, on mobile.

It’s not hard to see why it’s popular, as food trucks have had huge growth in recent years, and cooking games have been a solid genre in mobile games.You run a food truck and grow your food truck empire. It has a progression system, starting with the Pasta Truck. It’s a time management game along the lines of the Cooking Dash and Diner Dash series. The game has live operations, meaning it will be updated with new locations, features, and special events. I played the game, and I felt like I needed some more caffeine to keep up with it.

“With every game, we evolved the process and started focusing on an economy system that can scale and put out a game that players would enjoy for years to come,” Hardi said. “While it was not easy to let go of those other games, it made rational sense to focus on one major title that would bring in the desired numbers.”

Nukebox Studios hasn’t raised any outside money, and it has 33 employees. Other Indian game companies that have done well are Moonfrog Labs, which launched S.S. Rajamouli’s Baahubali: The Game earlier this year; and Rajesh Rao, who sold his Dhruva Interactive game company to Starbreeze for $11 million.