A joke is not that much different from a command prompt.

Video games are a chain of functions and systems into which we plug in variables and inputs. A programmer codes a character’s walk habits by expressing an “If statement” (e.g., “If right arrow or D key pushed, move character right”), which the player then triggers. That interaction forms the basis of the developer-player relationship. According to Depression Quest-designer Zoe Quinn, we as an industry should begin viewing comedy – or at least individual jokes – with the same mechanical mindset.

During her “Comedy Games: An Unexplored Genre” session at GDC 2015 last week, Quinn outlined a more systematic approach to developing game humor. Most of the design techniques we have already excelled at to guide player behavior and tell stories can be repurposed to deliver punchlines just as well as triggering a cutscene. But in order to systematically integrate jokes into our design pipelines, according to Quinn, we must first learn how to break down the joke-telling process. 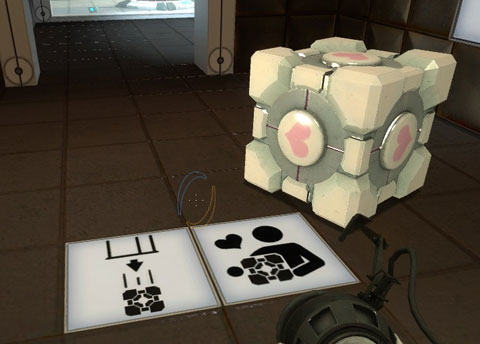 Above: Never underestimate the power of signage.

Comedy, while subjective in receipt, is largely uniform in construction. A premise is set up to drive expectations, which are then played with or subverted with the punchline. When we hear the question, “Why did the chicken cross the road?” our minds tend to anthropomorphize the bird, the joke setting up the expectation that there is some grand humorous motivation. The punchline “To get to the other side!” is purposefully straightforward, the humor deriving from the audience imbuing poultry with sentient goals. Expectation set, then undermined.

“What comedy does, is [that] you expect one thing, and get a totally different thing that’s hilarious …” said Quinn. “That’s generally how … comedy works.”

Players and designers operate on that same two-way flow of expectation, opening up a lot of opportunities for humor. Engrained in every long-term gamer’s mind are a complicated set of rules hardwired over years of play. One analog stick controls movement, the other the camera. NPCs in towns will give you quests and don’t mind you breaking all of their pots. It is possible to draw comedy out of the same gamey tropes that have informed hundreds of hipster game-writer articles about “ludonarrative dissonance.”

“We have 20 years of design convention that doesn’t make sense,” Quinn said. “… if you see a body of water in a game, you’re going probably [be] terrified it will kill you.”

Playing around with the mechanics already in your game is one of the easiest methods for joke-telling. In Anthony Burch’s “Designing Humor in Borderlands 2” session during GDC 2013, he described a single short mission that mocked the game’s overall structure for comedic effect. A single enemy demands a headshot, and despite the player needing to go through the same selection and confirmation process as missions that took 20 minutes to two hours to complete, the enemy would reward players as soon as they took 2 seconds to lodge a bullet in his cranium. 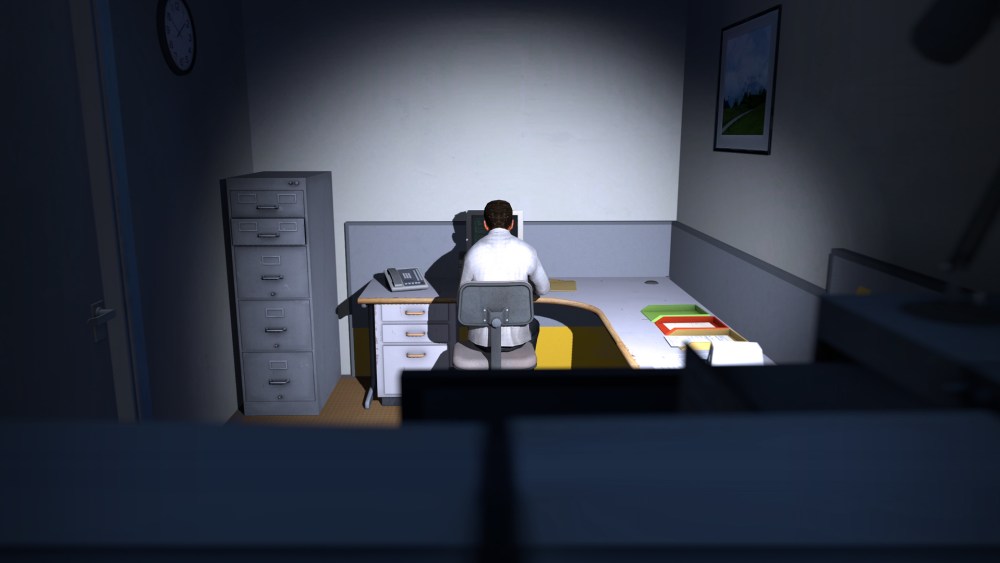 Above: Corporate oppression can be terrifying or hilarious, depending on your level designer.

How a game tackles joke delivery is very much like how we already guide players through levels. If we drop a character into a vast empty room with only one exit, a designer may put a light just above the door to focus player attention on where they need to go next. In that same way, it’s easy to pepper the walls of a boring office building with overly cheery promotional posters or mugs, to sell the humorous idea of a corporate conglomerate condescendingly “perking up” their drones from on high.

Strangely enough, Quinn cites horror games as the strongest bedfellow of comedy in games. The tension and release cycle – the pattern in which a designer builds up the possibility of attack and maintained until an encounter – can be a model for how comedic expectation can be set. A lot of the same techniques of environmental or emergent narrative storytelling that makes an abandoned prison complex anxiety-inducing can make the one-thousandth medieval fantasy village a player has visited in their gameplay career hilarious.

Nothing will ever be funny to everyone equally, or even reach most players the same way. But as Quinn described, we may already have the tools and creativity needed to start focusing more on crafting fully comedic experiences. It is just a matter of repurposing the skills we use to guide and/or terrify or players to make them laugh.