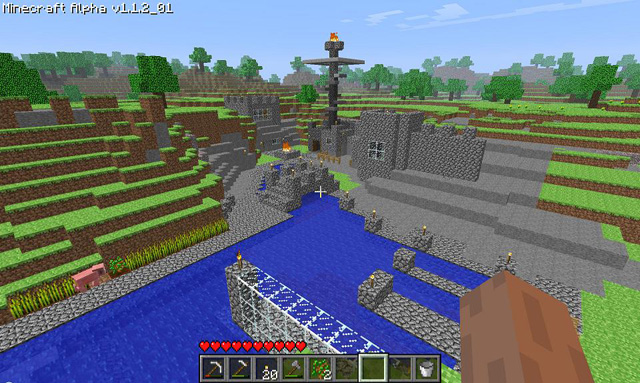 Indie sandbox building game Minecraft has sold over 4 million copies on the PC, according to the game’s official website. That number is close to blockbuster territory for any video game, and it shows that the indie game movement is alive and kicking.

The brainchild of Swedish developer Markus Persson, Minecraft allows players to use their own creativity to construct a variety of structures in a textured, cubic 3D game world. A Survival Mode adds the extra challenge of constructing buildings with limited resources while fending off advancing monsters. Although he is always looking to implement new features, Persson says fun and accessibility are his main design goals.

“I make sure to play the game a lot, and I’ve built my share of towers, and flooded my share of caves,” he writes on the Minecraft website. “If something ever doesn’t feel fun, I’ll remove it. I believe that I can combine enough fun, accessibility and building blocks for this game to be a huge melting pot of emergent gameplay.”

Minecraft began development in 2009 and quickly gained recognition for its simplicity and creative freedom. It has won a number of awards, including “Game of the Year” from Rock, Paper, Shotgun and PC Gamer UK, and was one of 80 games chosen to be in the Smithsonian’s “The Art of Video Games” exhibit. Still in its beta testing phase, Minecraft has over 16 million registered users who have recreated everything from the Taj Mahal to the U.S.S. Enterprise. Its success, obtained without the help of a major publisher or distribution service like Steam, is impressive.

Persson’s company, Mojang, recently celebrated its one year anniversary and is preparing for its first ever MineCon event in Las Vegas. The weekend-long convention will celebrate the official launch of Minecraft on the PC, and will feature a demo of the Xbox 360 version due out in 2012 as well. Fans hoping for a ticket are out of luck, though. MineCon has officially sold out.