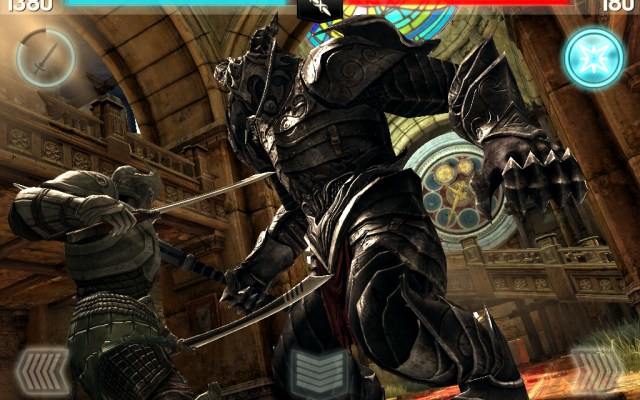 Infinity Blade II is debuting today, and the mobile game reminds us of the attractions of iterative game development. The risk is low, the potential for gain is high. While an innovative game can change the course of development in its own right and become the fastest selling game in iOS history, a well done sequel can polish what the first game got right to a high gleam, and add just the right amount of extras and enrichment to become something even sweeter. We’ve seen it with a series like Games of War, another Epic Games property, and now we can see it again with Infinity Blade II, my pick for the most console-like experience on the iOS platform to date.

Infinity Blade II (Epic Games & Chair Entertainment) is out for the iPad 2 and the iPhone 4S [update: Chair informs me the game is also compatible with the iPhone 3GS, iPhone 4, iPad, iPod
Touch 3 (16GB+) and iPod Touch 4].

There’s something primal about the way combat happens in this game. It would seem as though, on paper at least, that swiping and tapping on a glass screen wouldn’t feel so damn, well, tactile. Infinity Blade, the first game, gave us all a sense of place and a sense of impact with stabbing, blocking, dodging and slashing our way through the same path of evil warrior beasts and humanoids again and again, only to die at the hands of the God King at the end of each hard-fought road. Death became us, though, as we were reborn after each successive death at the hands of our arch-nemesis, and we again picked up the heavy mantle of hero, trudging ever onward to our doom. 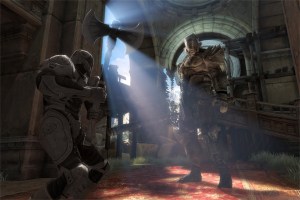 Infinity Blade II is a game of polish, solidity and ever-present light effects. The combat system is deeper, allows for more varied gameplay styles, and just feels dangerous. Weapons can again be upgraded with in-game earned money, but also not contain slots for enhancing gems of different shape and effect. New weapons can be purchased with the same in-game currency, which is also able to be purchased as an in-app micro transaction by the impatient or excessively rich.

Game play will seem suddenly familiar to players of the first game – move from place to place in the stunningly beautiful world with a tap on a pulsating circle, tap on the guardians in the way, and then fight. Fighting involves breaking the enemy’s attack with a series of blocks, parries, or dodges, then slashing across the screen as fast as possible to do as much damage. There are special attacks only available after a timed charging period is active, like the super strike button to the upper left of the screen, and magical attacks that are unleashed with a tap on the upper right onscreen button and drawing a rune-like figure center screen. It’s all great fun, most likely due to the intensity with which players must decide whether to block, parry, or dodge and in which direction. The sound effects and camera shake fully embrace the combat; more than once I found myself on the edge of my seat, slashing and parrying my way to victory. It’s all very palpable and intense.

In contrast to the first game, there are now three types of weapons: heavy, light, and dual wielded. The light weapon is similar to the swords of the first game; equipped with a shield, the protagonist warrior is a dead ringer for the hero of the first game, all shiny armor and fluid motion. The dual weapons are smaller, faster, and one is held in each hand. Parrying becomes easier, perhaps, but there is no shield to block with – a trade-off to be sure, even with a ducking motion now allowed. Dual weapons allow for faster combos, adding in tapping to the standard swiping or slashing motions of the single-handed sword/shield combo, and a special damage bonus comes in after a three hit combo is performed. The heavy weapons include axes and bizarre two-handed affairs, slower but doing incredible damage per connection with an enemy. Attacking in the same direction twice in a row allows a special attack, triggered by a slash in the same direction as an onscreen prompt, to do extra damage. Heavy weapons preclude dodging, so the directional buttons are used to block in those directions. 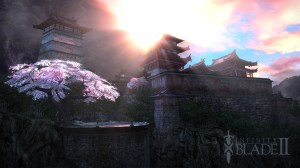 Visually, Infinity Blade II again sets the bar high for any iOS game, faster processor or not, wishing to compete. The world is brilliant, the lighting is much more realistically alive, the textures of characters and environments are richer, more detailed. Dust motes shine in the cathedrals, birds of prey fly off in the distance, cherry blossoms fall delicately to the ground. Big giant monster-things beat the ever-living crap out of the hero when a dodge is missed, or a block broken. The soundtrack, while suitably epic, is also at times creepy, even creating a subtle anticipatory soundscape, most notable after each new “rebirth” as the hero warrior stands on the brink of returning to the tower to free the Maker.

The story is new, here, too. We’re given tantalizing hints from early on that all was not what it seemed in the first game. The first scene includes a partner, a similarly armored woman with a crossbow and as many questions as answers. She plays a pivotal role in the final bit of the introductory scene, moving us forward to our first revelation. The storytelling is much more confident here, and – perhaps more interesting – much less melodramatic than I expected.

The menu screen has some interesting surprises – one tab touts a feature called ClashMobs – a massively social online challenge system – while another tab us that there will be new titans, new bosses, new areas, and – thank goodness – new weapons, shields, armor, magic rings and gems to collect. All these updates are promised to come free to game purchasers. If the first game is anything to go by, the chances are good that these are not idle boasts. The original Infinity blade had four content expansions during it’s little over a year lifespan. In addition, there are tabs to directly purchase the first game and a novel based on the infinity Blade universe, by author Brandon Sanderson, on the iBookstore. Now that’s cross media!

Overall, Infinity Blade II is a worthy successor to the already well-received original game. The game play, while similar in feel, is expanded enough to provide players of the original – as well as newcomers – a satisfyingly rich experience. It’s a fine day indeed when we carry around in our pocket or messenger bag such a compelling and graphically amazing video game, one that only a few short years ago would have been only seen on highly powered gaming consoles. Yes, Infinity Blade II is more of the same, but the first game was fantastic; this one is even that much more so. While owners of “older” Apple devices are out of luck, I highly recommend this game to owners of an iPad 2 or iPhone 4S; this is the benchmark, state-of-the-industry level game that everyone should have a chance to play. Our review score is 90 out of 100.