These are the games most relevant to our current console generation, which is why I left out the original Metal Gear Solid, The Twin Snakes (a remake of the original on Gamecube), and Portable Ops on PSP. The point of this article is to assign a definite length to MGS's cut-scenes so you can take that info and compare it to other games. I don't see a point in comparing a Gamecube or PSP exclusive to a more recent game like Gears of War orAssassin's Creed. Also, The Metal Gear Acid series isn't canonical, and the MSX originals (Metal Gear and Metal Gear 2) don't really have cut-scenes, so they're left out.

These results are based on my results of an average playthrough of these games. I can't claim to have seen and timed every cut-scene in all four games (it would probably take someone comparable to Hideo Kojima himself, the series' creator, for that), but for the average playthrough, these are the scenes you would have seen.

And without further ado, here you go: 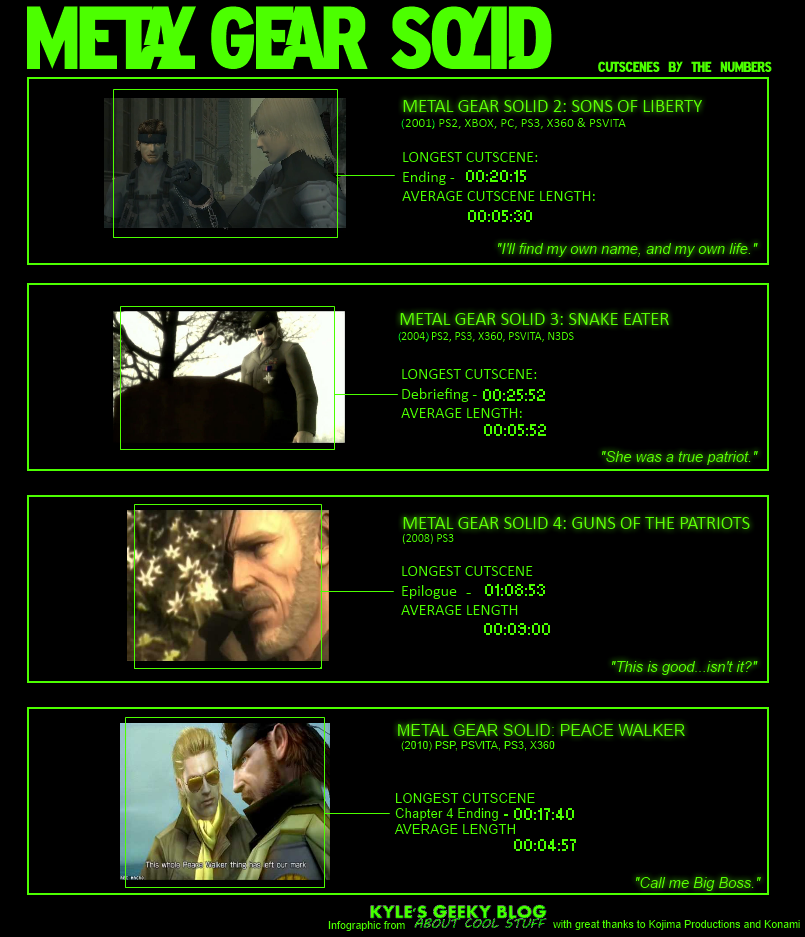 I should point out that just about all of the longest cut-scenes in these games come at the very end. Kojima apparently decided to "save the best for last" and hit players with the most story at the end. Also, contrary to internet myth, MGS4 does not have 90-minute cut-scenes. The final and longest one, "Epilogue," hits at a little over an hour, which is wrapping up a series of video games seven installments deep at that point, so it's understandable. After all, how long as the finale of Lost or another of your favorite long-running TV shows?

Now we have a slightly better understanding of how long we can expect to be watching Snake and company on their adventures before we get to sneak around some more. Metal Gear Rising: Revengeance is coming out later this year, so let me know in the comments if I should do this again with that game and the remaining titles.