Amazon launched its Lumberyard video game engine this week, showing its intentions to become a much bigger platform company in the games business. To date, Amazon has shown it wants to compete against the likes of Apple and Google with its own game app store, and it has its own game studios making mobile games and material for the Fire TV settop box. It also bought Twitch for $970 million to enter the gameplay livestreaming business in competition with the likes of YouTube. 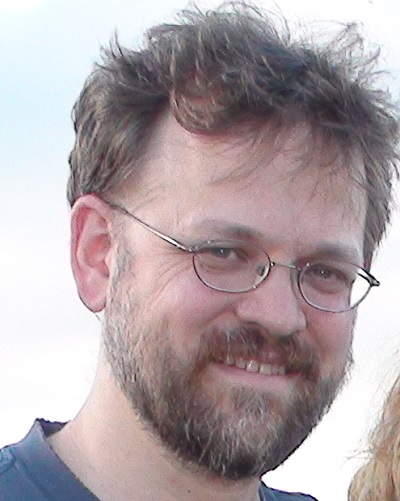 Above: Eric Schenk of Amazon.

But now Amazon is going further into the fabric of the game business with the Lumberyard game engine, competing against Unity, Epic Games’Unreal Engine, Autodesk’s Stingray, and others. The Lumberyard engine shows that the company has been thinking about this for some time. It already runs its Amazon Web Services backend infrastructure for a huge game developer community. It also bought engine technology when it acquired the Double Helix game studio in 2014. Then last year, Amazon secretly paid $50 million to get a license for Crytek’s CryEngine technology. That latter move gave Amazon access to high-end 3D game engine technology that’s suitable for building blockbuster games (what the industry refers to as “triple-A” development). Twitch services are also being tied into Lumberyard. It’s a big chess move in the platform wars, and not all of it is clear yet.

We wondered why Amazon made this move, where there’s already a lot of choice among game engines. So we asked Eric Schenk, the general manager of the Amazon Lumberyard engine. Here’s an edited transcript of our conversation.

Gamesbeat: Which division of Amazon oversees this? Is it Amazon Web Services, or is it part of the game group?

Eric Schenk: It’s run out of Amazon Games, but it’s an Amazon web service. Lumberyard, because it’s a cloud-connected game engine, has direct plumbing to AWS. We launched it as an AWS service. You can really only use it by using AWS. [Note: An Amazon spokesperson said you can use it as a stand-alone service, without AWS]. When we looked at it, it’s designed for game developers, but the technology itself is mainly AWS. It made sense to launch it as a branded AWS service.

GamesBeat: What’s the origin of the effort? Where did it all get started?

Schenk: Lumberyard started when we were looking around at what our customers were asking for as far as using our services at AWS with games. Amazon is a customer-focused sort of company. We were getting a lot of feedback on how to make our services easier to use in the context of game development.

We came to the conclusion that we needed to be there at the start of developing a game to be able to get things to the point we wanted as far as making things as easy as possible. That led us to the idea that we were going to need a game engine. That’s where the project started.

GamesBeat: Was this many years ago, or –?

Schenk: It started some years ago, yeah. The overall timeline and ramp-up is kind of spread out, but we’ve been working on it for a while. 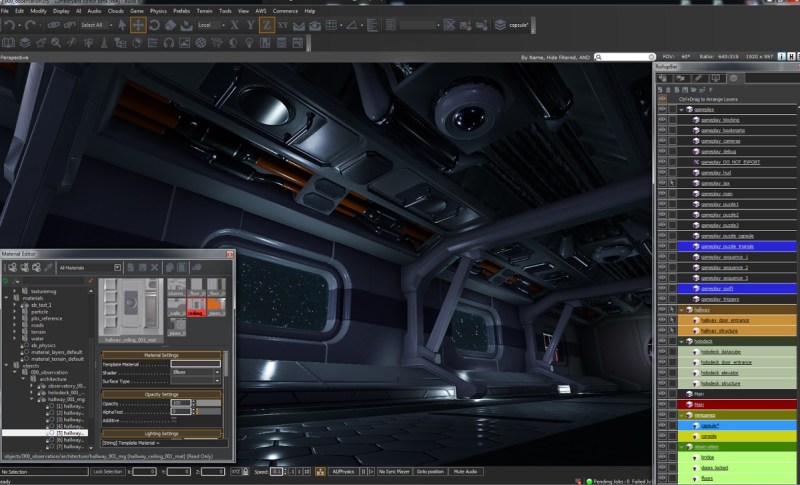 GamesBeat: What were the different pieces? We heard earlier about the Crytek and Double Helix and so on.

Schenk: The overall constellation of pieces—we started out with tech from Double Helix, the company we acquired. We had a bunch of technology that we were writing following that as well. Then we blended in CryEngine and the technology we licensed there. Overall, though, we’ve developed a lot of new pieces along the way.

We have a new networking system that started from the technology Double Helix had — what was used in games like Killer Instinct – but we’ve made extensive revisions beyond that to address new requirements. We’ve rewritten significant portions of the asset processing system compared to where we started. Coming out of the art packages like Max and Maya, we’ve added new things there and we have more coming along. We’ve redone the entire asset processing pipeline and how things get from the art package into the game. We have a live update mechanism that watches everything on your machine and quickly processes it when something gets changed, getting that back into the engine and into the game. If you’re running the game locally we have a sort of live update model there. And then there’s the AWS and Twitch integrations.

GamesBeat: How would you summarize the benefits you have to offer? Why does the world need another game engine when it already has so many?

Schenk: We want to make game development easier in general. We believe there’s plenty of room in the space for things to happen. The opportunity we’re looking at is around making the various online and community-centered games we see rising up right now even easier to build. We’re focused on community-centered gaming. Broadcasters and viewers are influencing how we think about games. Online development can be easier. It’s a great platform for building games and we plan to keep making it better.

From an AWS perspective, we’re neutral. If someone makes a game with whatever technology, be it commercially licensed or something they wrote themselves, they’re welcome to use AWS. We’d never prevent that sort of thing.

GamesBeat: It’s a free service. Is that a strategic decision in some ways?

GamesBeat: Are your own game studios already working with this technology?

Schenk: Yes, the Amazon Game Studios are using the technology we’ve constructed internally. They’re our first customers. We’ve been working very closely with them and they’ll continue to use the technology for the games we’re producing internally. 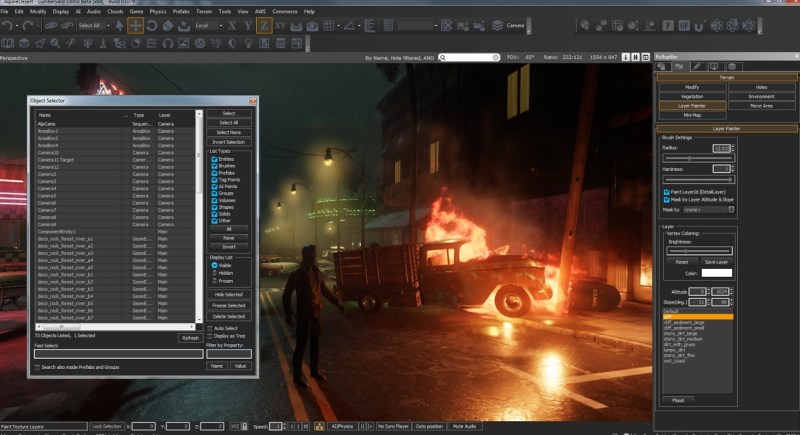 GamesBeat: Is there a difference between what a customer would see using this versus using the CryEngine alone?

Schenk: Absolutely. The entire mechanism for importing art into the engine has been heavily modified. The networking code that customers use and the experience of writing a network-play game experience is different. The integration as far as getting your game deployed through Gamelift onto the Amazon infrastructure is an entirely new thing.

As we go forward, we’re using a component model that’s coming into play. The entire experience of how you put a game together will change very significantly.

GamesBeat: How are you going to teach game developers how to use this?

Schenk: We’re planning a regular series of video tutorials, which we’ve already started. Of course there’s our documentation for the engine. We’re continually revising and adding to that documentation. The conversation on our forums—we have people standing by to help people there and we’ll be doing community outreach through the forums and at other events to teach people how to use Lumberyard.

GamesBeat: Is there a way to convey how big an effort this is? It sounds like this would take a large team.

Schenk: It’s definitely a serious undertaking. I’ve been building game technology and game engines for a long part of my career here. I wouldn’t underestimate how difficult this is. We’re generally careful not to speak about specific numbers, but this has been a serious investment on our part. We plan to keep taking it seriously going forward.

GamesBeat: Was this a factor in deciding to buy Twitch?

Schenk: Our overall game strategy is driven by looking at the interest from our customers in games. But I can’t speak specifically to the strategic decisions around purchasing Twitch.

GamesBeat: It seems to me that having a game engine is a strategic technology these days.

Schenk: Games are becoming the leading form of entertainment. Over a long arc of time, everyone will be a gamer of one kind or another. When we think about what our customers want, games are right there. We think it’s important to work with our customers and give them what they’re interested in. From that point of view, yeah, we absolutely believe it’s strategic.

This is just day one. We’re just getting started. It’s the start of a long run and we’re looking forward to talking with game developers and other potential users of our technology, getting in front of our customers and hearing what they want. We’ll be steering where we’re going as a result of what we hear from our customers about what they need. 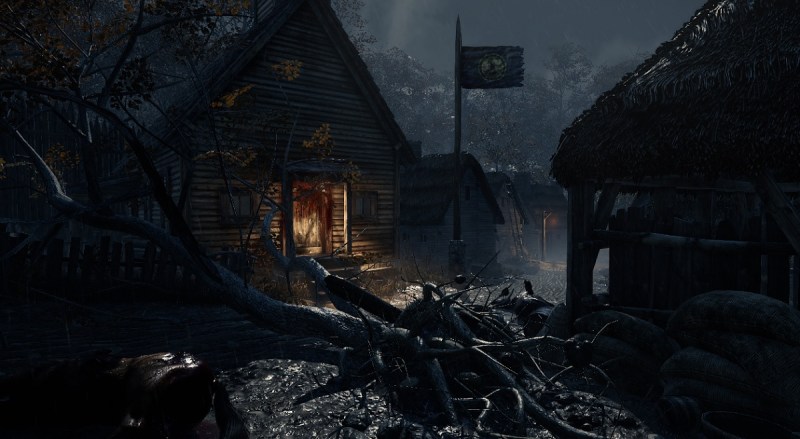 Above: Some spooky art made with the Amazon Lumberyard game engine.