These are all artifacts of a universe left behind. In 2009, Microsoft formed 343 Industries, a new game studio inside Microsoft that is dedicated to the Halo legacy. 343 Industries made last fall’s Halo 4, the beginning of a new Master Chief trilogy. That wasn’t easy for Bungie to do, considering Halo has now sold more than 50 million units and generated billions of dollars in revenue. The Bungie veterans moved on to a new headquarters and to Destiny.

But such was the will of Jason Jones, the remaining founder of Bungie. He began working on prototypes for a new game, an always-connected first-person shooter in a persistent online world. There are 350 people following Jones, many of them acolytes like Parsons once was.

“As naïve as this may sound, if Jason believes in something and he’s ready to go for it, I’m in,” Parsons (pictured left) said in the interview with GamesBeat. “No joke, I still walk in the door every day and think, ‘Who gets to do this? This is awesome, to be a part of this thing.’ Even when I’m having a shitty day, I feel that way. There are so many other things I could do that, for me, wouldn’t be as satisfying or as interesting. They might be enriching. They might satisfy some level of my curiosity. They might be exciting. But there’s something about these people and this place.”

Parsons had no qualms about leaving Halo and moving on to something new. He saw a concept image that Jones worked on with an artist. Parsons took a look at that image and said, “That’s it. That’s the game. That’s the idea. That’s a place that I want to be.”

The full team rolled off of Halo: Reach in 2010. Then Bungie struck its deal with Activision to publish Destiny.

The place for Destiny is upstairs, behind a second set of security doors (in case you’re a rabid fan and somehow you get past all the security).

It has a climbing wall, so that the developers can get a short nature fix scaling a big rock, rather than going beyond the city borders to the misty falls of the Snoqualmie river or other beautiful natural terrain surrounding Seattle.

One room was full of playtesters. No cameras were allowed there. After all, they were trying out the game on a variety of consoles, including something that looked like a PlayStation 3. That was the part of the tour where I couldn’t linger. It’s close to a kitchen, so the playtesters in particular can stay well fed.

There’s a room called the Fish Tank for creating trailers. People like Jim McQuillan, director of visual identity at Bungie, get stuck in there for days in the time leading up to big reveals. Bungie keeps that team on the inside because it wants to tell its own story.

The audio team has its own rooms, for sound-proof experimentation. Among them is the office for Marty O’Donnell, who created the memorable, haunting music of Halo which sounded almost religious, like a Gregorian chant. O’Donnell’s office is called the Ivory Tower. I don’t think he has topped the music from the first Halo, but, dammit, he deserves an office like that and his giant keyboard too.

At a table in the center of the room are a bunch of posters, art work, and other souvenirs that fans have sent in. Members of the team autograph the work so that the community managers can return them. Often, the wares are auctioned off for charities.

Also in the middle of the floor is a sign that says “Someone talked.” It’s a reminder of the damage that can happen if someone leaks any secrets to the press, as happened earlier this year.

“You have to be careful what you say out there,” Osborne said. “It’s awesome to be able to talk about it and get out on the social networks.” 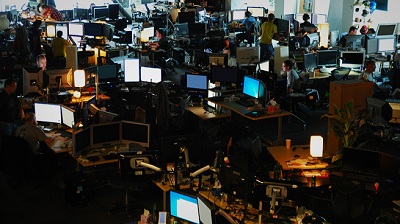 The view from above

There’s an upstairs to the upstairs. A bunch of conference rooms line the walls. Some have glass walls so you can see who is meeting inside. But one room, called the Hive, is enclosed on all sides. That’s where some of the most top-secret of the top-secret meetings take place. 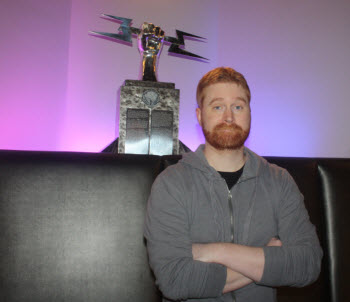 Many of the rooms were set aside for the Bungie Pentathlon, an internal event where players roam around the building and can play a bunch of old games.

From above, you can see the whole floor where the 350 or so developers work. It’s about a football field in length. Every desk has wheels, and atop each one are two or three monitors. The place has bright, high windows, but most of the room is poorly lit. In the dark, the artists work better. They occasionally look up to see who is gawking at them and trying to see what is on their screens.

“They sometimes feel like they are in an aquarium,” Osborne (pictured left) said.

The whole team is focused on just one game. Or series of games.

“That means there are no walls, no cabals,” Osborne said.

One section belongs to the user interface team. Another is for server engineers. There are world designers, story teams, 3D artists, concept artists, and testers. But everybody is the same room. Like a family, the Bungie people say.

Big posters hang from the ceiling with Destiny art. The company unfurled them on the last Bungie Day, when the whole company takes over a picnic area and celebrates together.

Near a snack area hangs a big punching bag, the kind that hangs from a bar in a gym. People can walk over to it any time and blow off some steam, punching the hell out of it. Some people have knocked it off the bar entirely. Rumor was it was Harold Ryan, chief executive of Bungie.