Living up to expectations

Bungie.net attracted fans, such as Osborne, who grew up in the fan community. He was offered a job to join it and drove across the country with everything he owned in a car. Back in 2004, with the debut of Halo 2, the company launched Bungie.net. It was a small effort with just a couple of people. They created things like the stats that are now commonplace in first-person shooter online games, as a measure of a player’s stature. Now the Bungie.net section is a big one, with everybody sitting together. Osborne smiles as he acknowledges that Halo changed his life.

Parsons said, “Bungie.net started in 2004, and it was revolutionary. Now we’re saying, ‘How do we make sure that we can connect you, wherever you are and whatever your mood, to the Destiny universe?’ That meant a big exploration of mobile. I think they showed you the user-testing lab next door. The very first thing that was tested in that lab was mobile. We’ve made some big investments there, because we think that, as awesome as stats and groups and messaging and all those things are, we just think there is so much more there. When we’re building a universe that has so many more stories and so much more depth, there are too many stories to tell just inside of that.”

OK, to me, that sounds like we’re going to see mobile versions of Destiny. Somewhere on the floor is the team of Bungie Aerospace, a mobile-focused team that was born from experiments in user testing.

At Bungie.net, the job is to stay in touch with millions of fans. The company will extend the experience to mobile in the future. With Destiny, it will be hard to carry on a conversation with a million people at a time. The Bungie.net team is trying to figure that out ahead of time. Essentially, the community will be deputized to curate its own experience and vote on what rises to the top. 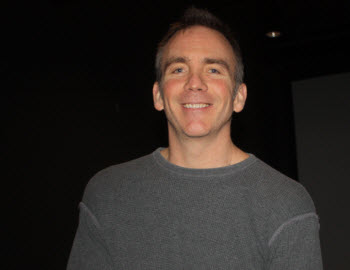 Our tour ended with our interview in the big theater, with Parsons. As the company builds its games and moves forward, Parsons has to think about keeping the company’s culture the same.

Parsons said that he absorbs a lot of the feedback from new employees and takes them to the rest of the team.

“We take those ideas seriously,” he said. “I want to do it in that four to eight weeks because that’s before they become cynical and jaded. [Laughs] You want to get that perspective. It’s great to hear the feedback, including that Bungie has remained a place where, whether you’ve been around for more than a decade or whether you’re just a few weeks in, what you do matters.”