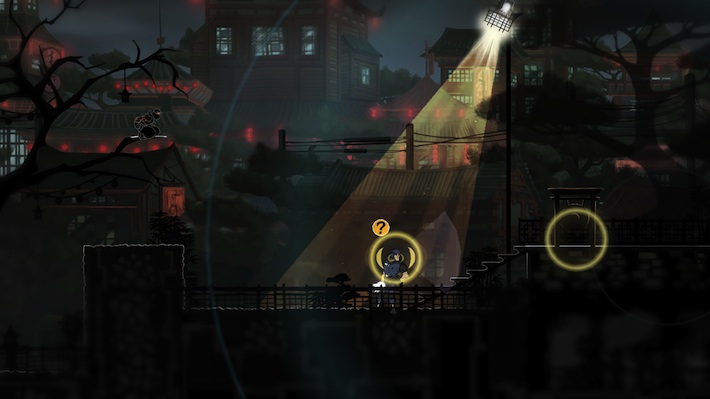 Nels Anderson is a self-described history nerd. He could tell you everything he’s currently learning about the history of Byzantium, a pursuit inspired by his play through of Assassin’s Creed: Revelations. But the game designer at Klei Entertainment isn’t here to talk about that; he’s here to speak about Mark of the Ninja, the studio’s upcoming 2D stealth game for Xbox Live Arcade.

And Anderson has a lot to say, especially when it comes to researching the annals of Japanese history and incorporating what he and his colleagues learned into the game.

He told GamesBeat so much that all of it couldn’t even fit into our massive preview from last week, which only contains half of the story. The other half is a tale of ninjas in war-torn feudal Japan, fighting a battle against the pop culture notions of what those clandestine mercenaries actually did, and finding inspiration in stealth games from years past.

“There aren’t easy, medium, [or] hard difficulty settings, because when you can kind of one-shot everybody in the game, it’s not like there are values you can easily tune to be like, ‘This guy is gonna get more hit points when you stab him,'” Anderson said. “I really liked the way that Thief approached all their difficulty settings, where when you pick the harder difficulties, there’s just more stuff that you need to do. To the point where, we don’t have this, but in Thief like on the higher difficulty settings, you just couldn’t kill anybody.

“In [Mark of the Ninja], you can actually get through the entire game without killing anybody as well. But it’s not like an enforced thing; it’s more like a player choice thing. The difficulty comes out of [optional objectives] that don’t block your progress through the game at all.” 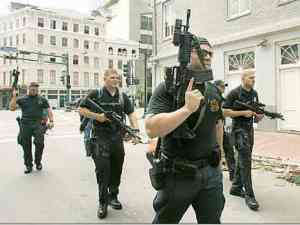 Above: The PMC formerly known as Blackwater

“It’s kind of interesting — you look at the way those [private military companies] operate now and it’s almost analogous to how ninjas operated like during the 15th or 16th century. They did all the dirty, dishonorable stuff that the samurai were above doing. And that’s kind of like how PMCs operate now: They do all of the horrible shit that the Army doesn’t want to be held accountable for. It’s like, that’s sort of an interesting parallel. So we kind of chose that on purpose as well.”

“Part of [the reason we chose to set it in the modern-day] was because, basically, the only other ninja game that actually involved being sneaky was Tenchu. We definitely didn’t want it to seem like, ‘Oh, we’re doing Tenchu but in 2D!’ But the other thing is…if you’re not gonna go the supernatural route, and we definitely did not want to do that — like there’s no ‘ninja magic’ or anything like that — there’s only so much you can do in a feudal-type setting.

“So in a modern setting, there’s just more stuff you can play around with. It feels less artificial…. And thematically, there’s kind of like an ancient versus modern thing going on a bit as well. That’s sort of a way we can manifest that, where it’s like these guys are all super anachronistic, like they’re kind of able to survive into the modern era because they sort of don’t really engage with the modern era. They’re almost able to be ninjas because no one believes ninjas actually exist, right?

“It’s almost like hiding in plain sight…. Kind of the problem with making a ninja thing is that, with ninjas in pop culture, it’s almost always just horribly corny, right? It’s just super-corn ball or, maybe if you’re lucky, like it’s just all the balls-to-the-wall ultraviolence.” 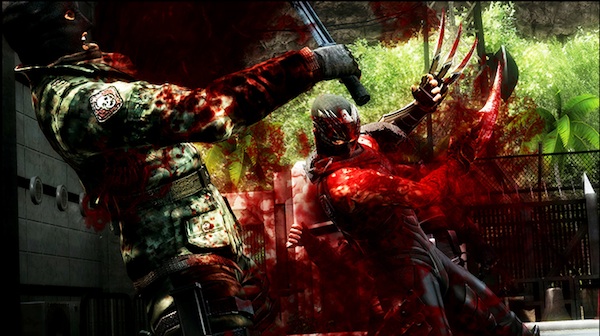 Above: The ultra violent Ninja Gaiden 3

“Those [violent ninja] games are good. It’s just that they’re good for what they try to do. But what they try to do isn’t really exercising what the fictional construct of a ninja affords. Because when you say ‘ninja,’ people get it. It’s like, ‘Oh, they’re sneaky and fast and clever and stuff and they have different tools and things.’ It’s not like you need some complicated back story about special forces with psychic blah blah blah…. It’s just like: ninja. Boom. You get it. It’s good.

“But the problem is we’re kind of fighting an uphill battle against that ‘Oh, this thing isn’t super corny.’ The [game] is stylized, but it’s dramatic. It probably has more in common with like a Jason Bourne film or something than American Ninja…. There were a couple of very good ninja movies, especially in the ’70s, from Japanese directors out of Japan. But those things are almost the exception that proves the rule that almost all of it is garbage.” [Laughs]

“So what we ended up doing is that [writer Chris Dahlen] and I just looked at a lot of like traditional Japanese history. Like back when ninjas were real and actually existed and everything, and pulled a lot more of that into the game than any like really pop culture notions of ninja-ness…which is kind of cool because I’m a giant history nerd anyway. Some of this stuff almost doesn’t seem real, but it [really is] in the historical record.

“Like there was one ninja who tried to assassinate Oda Nobunaga, and as Nobunaga was riding through the forest with like his vanguard of dudes, this ninja…with a giant rifle, like shot Nobunaga and knocked him off his horse. And the ninja just disappeared, and Nobunaga sent guys after him. They finally found him like four years later, buried him up to his neck in sand, and then slowly sawed his head off…. To nerd out on Japanese history was super fun.”