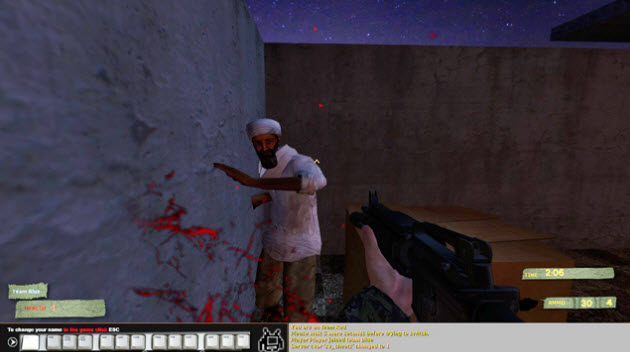 Kuma Games has created a new episode of its reality-based video game KumaWar where you can kill Osama bin Laden yourself.

Based on publicly available data, the game recreates bin Laden’s compound in Abbottabad, Pakistan, and puts you behind the weapon of a member of Navy SEALS Team Six, which gunned down the world’s most wanted terrorist just seven days ago. This kind of instant video game appeals to some gamers who want to relive reality in video games. But the instant nature of the production usually means the game is a poor quality version of what game developers would otherwise achieve. What the game lacks in quality it certainly makes up for in controversy, giving it instant marketability based on the news of the day.

But this is nothing new for New York-based Kuma Games, which is now on its 107th episode for KumaWar, which first launched in 2004. The game has a reasonably good 3D graphics engine that can be quickly reskinned with new art and characters. The company started making the series in 2004 with Operation Anaconda, an episode that began with the invasion of Afghanistan. Keith Halper, chief executive of Kuma Games, said the final episode in the series, KumaWar Episode 107: Osama 2011, gives a kind of closure to the series for gamers who played the whole thing.

The game will be criticized as tasteless pandering. But Kuma Games has dealt with that criticism for a long time as it chronicled events in the War on Terror. Halper’s games have been used on The History Channel as a way to recreate events that people otherwise can’t experience. He says the value of such games is in what they teach users.

“The SEALs must have been quick, smart, lucky or all of the above to have al Qaeda not be able to reach their weapons,” said Halper. “Additionally, we see that the final rush up the stairs must have been incredibly perilous. Finally, the SEALs didn’t know where Osama was and neither will you; every corner is a potential death trap and each must be explored to find your target. Players will see all the key elements first-hand and gain a knowledge of the operation that would be difficult to obtain through traditional linear narratives.”

The game has two videos attached to the new level, where experts talk about the mission in an authentic news style show. It includes interviews with experts about what might have happened during the raid. In the game, bin Laden is never in the same part of the compound, and his protectors will have access to weapons caches in the compound. So the game takes some license with reality for the sake of playability.

We can expect to see similar games from other developers soon as well. Another one that just went up is the Bin Laden Raid at News+Gameplay.

Below is the video that accompanies the bin Laden final mission in KumaWar.