The company whose tech can make “virtual reality caves” has one of tech’s biggest names behind it.

WorldViz, a maker of virtual reality tools for enterprises, has received a first round of funding from Intel Capital. The money will help the Santa Barbara, Calif.-based company capitalize on a renewed interest in virtual reality thanks to Facebook’s $2 billion purchase of Oculus VR. Virtual reality, which immerses you in a virtual world, and its cousin augmented reality (which overlays animations on the real world via special glasses), could lead to a $150 billion market by 2020, according to market adviser Digi-Capital.

The amount of Intel’s investment wasn’t disclosed. But it speaks highly of WorldViz’s comprehensive approach to virtual reality, which I’ve witnessed firsthand. WorldViz makes both hardware and software for a variety of VR applications, and it partners with a lot of makers of VR gear.

WorldViz makes virtual reality applications for enterprises as well as tools for creating software. These include cool virtual reality “caves,” where projectors paint VR images on a wall. You can maneuver through 3D landscapes, such as an operating room, and move objects around, as an architect might. You can reach into the world using gestures that a handheld sensor picks up.

I also tried out a WorldViz application where you wear Oculus Rift VR goggles. It has realistic sound and imagery that makes you feel like you are walking a plank between two columns, with a steep fall on either side. In fact, I was walking on a carpet. But it was so realistic that I almost lost my balance and felt like I was standing on a precipice. These are pretty cool VR effects that go beyond what you normally see in the space.

“We’re quite excited about the relationship with Intel, which will get us access to capital and technologies like Intel’s RealSense 3D cameras,” said WorldViz CEO Andy Beall in an interview with VentureBeat. “They bring a lot more than cash and silicon. They have a huge Internet customer base and a lot of research with their perceptual computing group. They will help us gain recognition in a virtual reality field that is moving a lot faster.”

WorldViz was founded way back in 2002, during a time when the initial excitement around VR was waning. It soldiered on through a period of lackluster interest and now finds itself in a hot market again. Beall views that time as one when WorldViz gained a lot of learnings for VR.

WorldViz has been selling its virtual reality development studio, Vizard, for some time. The patent-pending tech is now used by more than 1,500 Fortune 500 companies, academic institutions, and government agencies.

“Our investment in WorldViz is consistent with Intel’s strategy to advance natural computing experiences, including virtual-reality technology,” said Gregory Bryant, vice president of Intel’s client computing group and general manager of desktop client platforms, in a statement. “Enterprises have barely tapped the potential of virtual reality, and WorldViz has demonstrated both a technical and business vision to drive adoption of virtual reality in professional settings, anchored on Intel Architecture.

“By combining the company’s software and Intel’s RealSense 3D technology, developers and original device manufacturers will be able to rapidly create virtual-reality content and deploy it on a wide range of devices for a fully immersive experience.” 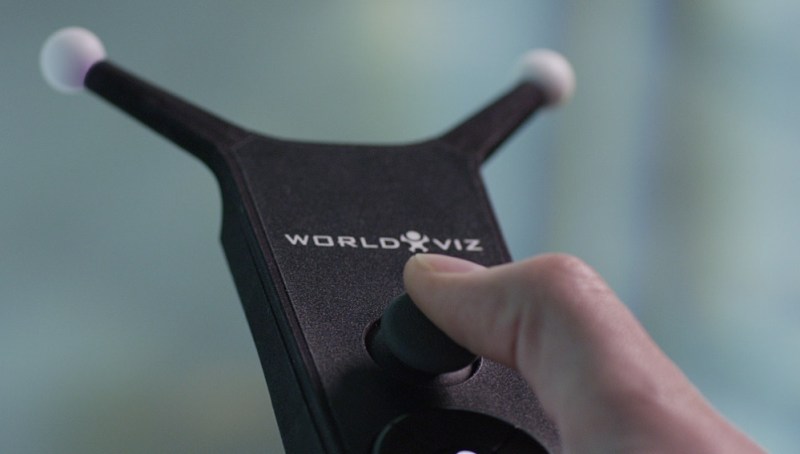 Above: WorldViz uses handheld sensors for gesture control in VR.

WorldViz also has turnkey architecture visualization solutions that let architects virtually walk through their buildings and get a realistic feeling for spaces in 3D. Beall said Vizard is easy to learn, and it has everything needed to build interactive and immersive 3D content.

WorldViz and Intel will work together to develop scientific and industrial VR offerings integrated with Intel computing frameworks and to provide VR platform technologies for the fast-growing pool of developers requiring dedicated tools for immersive content creation.

Intel Capital, the investment arm of the world’s biggest chip maker, has invested more than $11.4 billion in more than 1,400 companies in 57 countries. About 211 portfolio companies have gone public on various exchanges around the world, and 366 were acquired or participated in a merger. In 2014, Intel Capital invested $359 million in 125 investments, including 59 new deals.

Beall said that WorldViz is launching its products and services this quarter in an attempt to repackage what it has offered for years.

“We are making it [much easier] to understand for customers, providing concrete options and a growth path,” Beall said. “You can start with a head-mounted display, a base cave system, and base virtual-collaboration tools.” 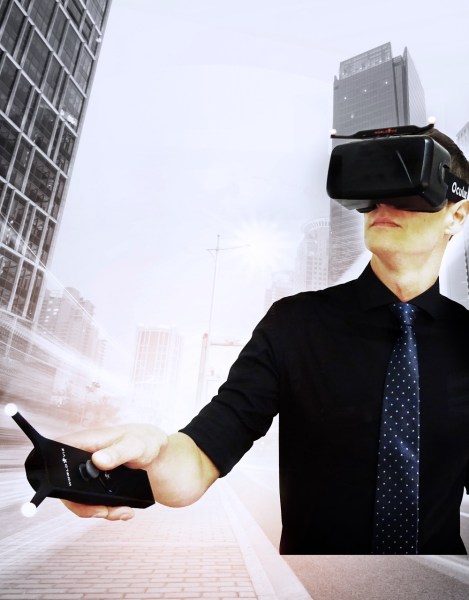