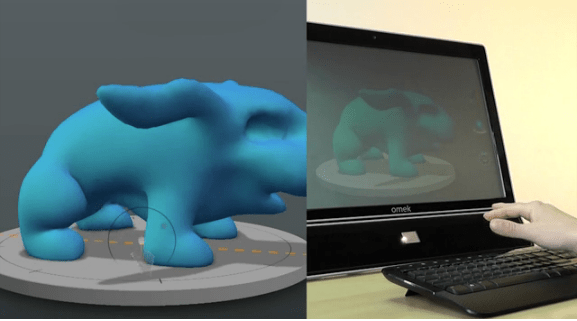 Competitors Qualcomm and Samsung are also considering making an offer — although one source said that a bidding war for Omek is unlikely.

For these companies, gesture control technology is attractive as it offers a way to simplify increasingly sophisticated devices, draw customers to cool sci-fi-like devices, and chew up a lot of computing power that can be produced by their future chips.

“I know that Qualcomm and Samsung are in for natural user interface and biometrics,” said Motti Vaknin, a partner at Israeli venture firm Cedar Fund. By “in,” he refers to partnership, investment, and acquisition opportunities. Intel is currently partnered with competing startup SoftKinetic, and its investment arm Intel Ventures led Omek’s first round of funding.

In July 2011, Omek — with its gesture tracking and recognition technology — raised $7 million. A spokesperson from Intel Capital declined to comment on the acquisition talks.

Omek needed to find another round of financing, so the timing on the bidding isn’t surprising, according to one source familiar with the matter.

VentureBeat also reached out to Omek Interactive. CEO Janine Kutliroff said, “Omek is always having conversations of a strategic or financial nature. We never comment on rumors in the marketplace.”

Jim Moore, the founder of technology M&A firm J Moore Partners, said the intellectual property would be an asset to buyers. “In this case, using depth of field camera data for gesture input will allow people to control their computers without touching them,” he said. He continued, “It is [the] early days for this technology as the application builders will need to build this into their interface and functionality. But the possibilities are enormous.”

The race for ‘perceptual computing’

The race to pick up the technology reveals the hype and reality around cool new technologies that cross multiple markets. Gesture controls have been hot in games since Nintendo debuted the Wii motion-sensing game console in 2006. The Japanese company sold more than 100 million systems, beating out Microsoft and Sony, who were taken by surprise by the popularity of the new ways to control games.

Microsoft bought several companies in response and debuted its rival technology, Kinect, with great success in 2010. Sony followed, less successfully, with its PlayStation Move controller. But it continues to invest in its EyeToy camera-based technology. Microsoft clearly tried to lock up the intellectual property for motion-sensing technology, but it still bought commercial chips from PrimeSense when it shipped Kinect.

While the technologies succeeded in the game market, players cried out for better gesture recognition. Kinect couldn’t detect movements that were too close to it or too far away. A distance of about 10 feet is the sweet spot. Newer technologies can detect subtle finger movements and motions that are inches away from the screen. Intel is particularly interested in such technology for the PC.

As the world’s biggest chip maker, Intel’s focused on “perceptual computing,” or technologies for controlling a computer or tablet that include voice recognition, face recognition, eye-tracking, and motion sensing. Qualcomm and Samsung, likewise, also want to bring such technologies to their mobile markets.

Along the way, the hype cycle has grown as companies try to recapture the experience that Tom Cruise demonstrated with a gesture-controlled computer in the sci-fi film Minority Report. But consumers are likely to reject technologies that fall far short of this target. Omek’s early technology fits into this category, and marketers are still searching for the ideal markets for gesture-based controls.

Omek’s earlier focus was doing full-body motion-tracking systems, dubbed Beckon, that competed with Kinect. The idea was to enable gesture controls for movies or music playback, as Microsoft’s Kinect can also now do. But there wasn’t much of a market beyond Kinect.

PrimeSense showed new 3D cameras at the Consumer Electronics Show this year. These cameras featured much reduced costs so that the gesture controls could be taken into new markets such as tracking goods on retail shelves. Qualcomm has acquired its own technology for gesture control as well.

Now Omek is focused on a technology that it calls Grasp, which is the recognition of small finger movements at closer range. Omek is working with various Intel divisions on that technology, which could be part of the larger perceptual computing offering. In software, Omek’s rivals include Softkinetic, Pointgrab, and Eyesight. The latter use 2D webcams, rather than the more costly 3D space cameras.

Gestigon and LeapMotion are competitors in hand-movement recognition.

Check out the video below for a demonstration of Omek’s close-range gesture recognition tech.

This story is developing. We will update it as we learn more.