SAN FRANCISCO — The world’s biggest chip maker has a vested interest in helping gaming succeed, as the pastime pushes the envelope for computing technology and creates new demand for high-tech technology.

Nevertheless, Intel showed today that it is fully behind the gaming industry and support what it means for the computing industry and society. Gaming is something to be celebrated, not feared, according to Intel. Such talk is normal among game industry advocates, but it doesn’t always come out of the mouths of executives at mainstream companies like Intel.

“We’re going to give this whole gaming thing a go,” said Kirk Skaugen, the head of the PC hardware business at Intel. “This is the most demanding marketplace. It pushes the performance envelope.”

Intel software chief Doug Fisher and Skaugen talked about the full gamut of hardware and software initiatives that support gaming at Intel. Intel wants to position itself as the “game changer” in a variety of ways.

Skaugen noted that tech advisor firm Digi-Capital estimates that gaming will be a $92 billion industry in 2015, with PC gaming accounting for $34 billion of this. He noted that upward of 70 percent of gamers in China are on PCs. About 711 million people worldwide consider themselves active PC gamers, meaning that they pay for games every month. 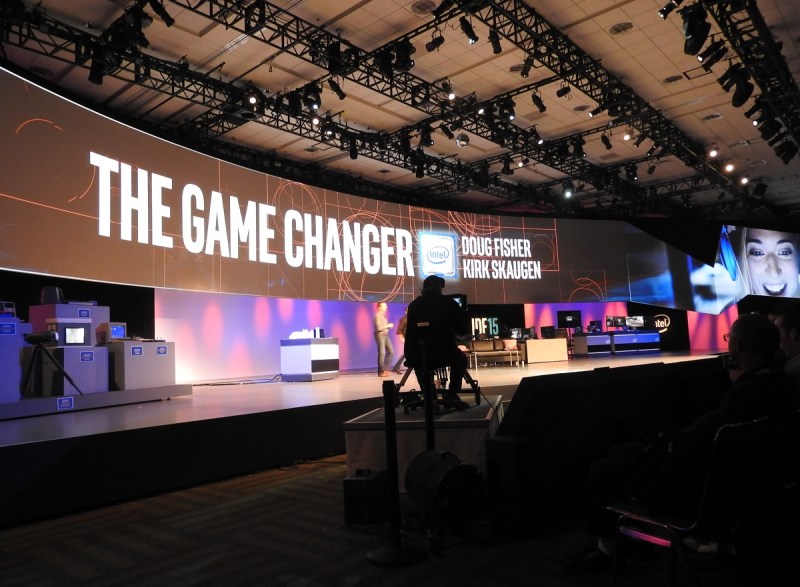 PC gamers are important to Intel since they tend to refresh their gaming computers every two to three years, compared to once every six years for the average user.

Fisher noted that gaming still a lot of myths, such as the lie that only teenage boys play games. In the U.S., the average age of players is 35. And 48 percent of them are women. About 74 percent of kids play games, and gaming has been proven to keep your mind active and always learning, Fisher said. Doctors, he noted, make fewer errors in surgery if they play video games. And Valve’s Steam PC digital game distribution service has 125 million active users.

He also noted that professional gaming has become a huge sport. The esports business now has about 134 million spectators, and it’s a $612 million market. Intel’s own Extreme Masters events with the ESL, one of the world’s largest esports leagues, draw players from 180 countries.

Intel invited a team of female pro gamers from Counter Logic Gaming onstage to illustrate the growing diversity. The team members said they had been playing together for a decade and were excited to see how much esports — and its prize money — has grown.

But they noted that women are less than 5 percent of the competitors in esports, and they would love to see more women compete. Intel is supporting the cause of diversity in gaming in part because it ran afoul of the cause last fall when it appeared to pull an ad from a publication that ran a controversial editorial in favor of women in games during the GamerGate hate mob (even though its proponents claimed it was about “ethics in game journalism”).

“We want to see more women compete,” said team captain Stephanie “missharvey” Harvey. “We started because we were inspired by other women.”

After that embarrassment, Intel turned about-face and said it would invest $300 million in diversity in tech and games, and it also pledged to hire a lot more women and underrepresented minorities. Intel also announced a $125 million venture fund to invest in companies with diverse executive and founding teams.

You could say that Intel is pandering to women and minorities. But one day, if not already, they’re going to be most of the gamers. 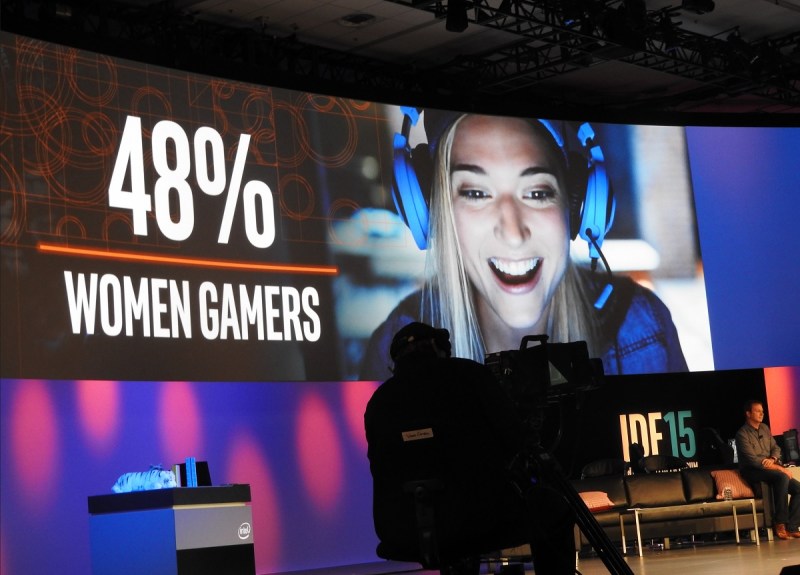 Above: Female gamers are 48% of players.