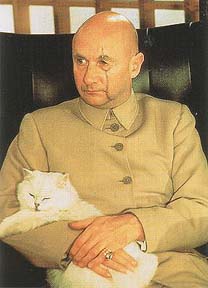 Intel is in that part of the James Bond movie where the bad guy talks about how he’s going to eliminate Bond, which in this case is that pesky little company, Nvidia.

Intel has disclosed more details on Larrabee, the stand-alone graphics chip with lots of Intel-compatible x86 cores on it. Those cores, or little processors, are like little PC microprocessors on a chip, but they can handle the functions of a graphics processor. There will be anywhere from eight to 48 cores on different versions of the Larrabee chip, according to industry analysts.

Intel will more fully describe the chip at the Siggraph graphics conference in Los Angeles Aug. 11 to 15. Larrabee isn’t expected to debut until 2009 at the earliest, but that hasn’t stopped Intel executives from talking about its potential to wipe out the rivals in the graphics chip market, which also include Advanced Micro Devices.

As we’ve written before, Intel has been watching the rise of visual computing and how much more processing is happening in the graphics chips in a computer, as opposed to the microprocessor. Justin Rattner, chief technology officer, said that chips such as Larrabee will be capable of a kind of hybrid processing. That means it will be able to do both “rasterization,” which paints pictures on a screen in the traditional way that graphics chips do by drawing one layer of an image at a time, and “ray tracing,” which paints images by sending rays into a 3-D space and then rendering only the points that the rays hit, not the points obscured by something. Nvidia and AMD are going to have to slug back in a big way in order to hang onto their market share in the graphics chip market, which analyst Jon Peddie pegs at 400 million units a year. For a couple of years, it’s safe to say that Nvidia and AMD will be OK.

Meanwhile, Nvidia had to address a story in Digitimes about how Nvidia allegedly told a Taiwanese motherboard maker that it planned to exit chip sets, which are chips that combine graphics with other PC functions such as input-output systems. Nvidia has an estimated 60 percent market share for chip sets on Advanced Micro Devices processor platforms, and Nvidia still has a lock on SLi chip set technology for tying together multiple graphics cards on a computer.

Brian Burke, who writes the NTeresting e-mail newsletter for Nvidia, wrote, “There is so much ridiculous stuff posted on certain websites that many of you do not even bother to inquire when silly stories go up. Many have asked about this one….The story on Digitimes is completely groundless. We have no intention of getting out of the chip set business.”

Anything is possible here, and Charlie Demerjian of the Inquirer, who has been one of the company’s harshest critics, just put a stake in the ground saying that Digitimes is right. But to give up on the chip set business would likely be tantamount to suicide for Nvidia. If they’re giving up on that, they might as well surrender to Intel. Logically, we’re a long way from that.