LAS VEGAS — Intel chief executive Brian Krzanich took one of the computing giant’s biggest recent gaffes — its apparent support for the #GamerGate movement — and turned it around into a huge pro diversity campaign for both the tech and gaming industries.

Krzanich made his pro diversity campaign — backed by a $300 million investment over the next five years — the closing of his keynote speech at the 2015 International CES, the big tech trade show in Las Vegas this week. He is putting the weight of the world’s largest chip maker behind the movement to make the tech and game workforces more diverse because “it’s good business, and it’s the right thing to do,” Krzanich said.

Krzanich said the program would allow Intel to lead by example by making its talent workforce represent the makeup of the population by 2020. He said that would not be easy, and it would involve a lot of investment in tech education for women and minorities, and that was why Intel is putting up money

In doing this, Krzanich has taken a black eye and turned it around. Last fall, Intel unintentionally stepped into a controversy in the gaming industry, dubbed #GamerGate. In that controversy, two sides squared off over the ethics of game journalists and the harassment of women and minorities in gaming.

The pro #GamerGate crowd — which was allegedly condoning the harassment of women gaming leaders (which was vehemently denied by some members of the #GamerGate movement) — lobbied Intel to pull its advertising from the game publication Gamasutra, which ran a pro feminist game column. Getting some complaints, Intel quickly pulled its ads from Gamasutra — without realizing it was siding with a group that was accused of harassing women.

Intel apologized and restored its ads to Gamasutra, but the damage to its reputation was done. Ever since, Intel’s leadership has been plotting how to recover from that gaffe.

Gordon Moore, chairman emeritus of Intel who, 50 years ago, predicted that the number of components on a chip would double every two years — a prediction that defined technological progress and became known as Moore’s Law, closed the event with a video comment: “Remember, anything that has been done can be outdone.”

Krzanich walked off the stage and immediately shook hands with the Rev. Jesse Jackson, who was in the fourth row of the keynote room.

Talking to VentureBeat, Jackson said, “I am very pleased with the whole plan.” 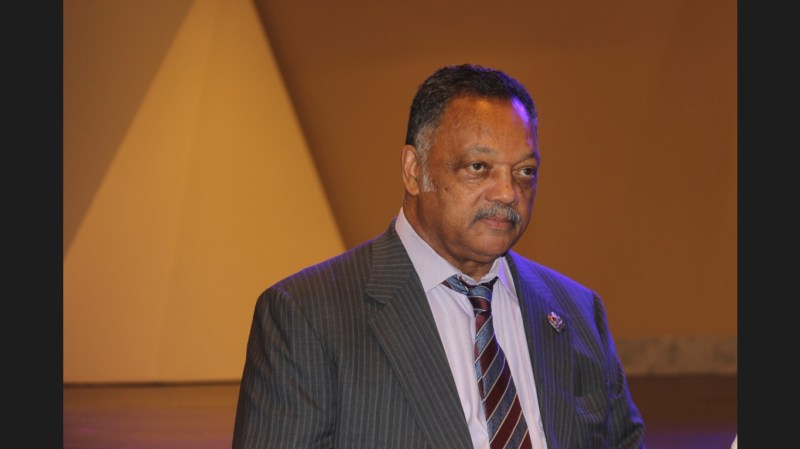