The May 9 deadline for the 2017 installment of the Intel Level Up Game Developer Contest is just around the corner, so if you’re a game creator, hurry up and get your entry ready. If you’re a gamer, though, you’ll want to watch out for the list of winners, because some great creations have come out of this competition.

The Intel Level Up Game Developer Contest has a rich history going back a decade, starting in 2007 as an engineering-driven contest centered around a programming challenge. In recent years, though, Intel decided to use Level Up to see what kind of entertainment game developers could create.

Intel has also added a lot to the Level Up contest, such as bringing in sponsoring companies (including Epic/Unreal, Green Man Gaming, Razer, and Unity), and calling on industry luminaries (such as Tim Schafer, Founder of Double Fine Productions; and Chris Avellone, former Creative Director/Chief Creative Officer/Co-Owner of Obsidian Entertainment) to judge the entrants. The inclusion of industry businesses and veteran game artisans raised the contest’s visibility and prestige. 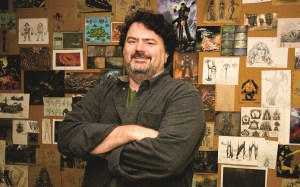 “I love seeing all the games — some from indies I am very familiar with, and some from new voices with crazy ideas,” Schafer says. “I hope to see ideas that are truly new every year — game mechanics I’ve never seen, fresh artistic visions. The enthusiasm and creativity are incredibly inspiring to me.”

However, the most important addition — certainly to the entrants — was the introduction of valuable prize packages. This year, the Game of the Year grand prize winner will receive a $5,000 cash prize; an agency-driven digital marketing campaign valued at $12,000; and an offer of a distribution contract with Green Man Gaming.

With winners receiving rewards of this scale, it’s no surprise that last year’s contest inspired 331 total submissions from 28 countries around the globe — a nearly 50 percent increase over the year before.

The 2016 Game of the Year and Best Action Game went to Ellipsis, a speedy “avoid-’em-up” game from Munich, Germany-based Salmi Games. For winning those two categories, Salmi Games received $8000 in cash, a marketing campaign, and a Razer laptop. Yacine Salmi, the studio’s CEO/founder, also indicates that the contest “opened up many doors for us.”

“It was an incredible moment for us,” Salmi says. “We really didn’t expect to win. At that point, we had been selected for a few showcases and won some smaller prizes, but nothing on the scale of the Intel Level Up competition. It’s an unbelievable honor, especially given the quality of the other games in the competition.”

Another winner from 2016 was Pocketwatch Games’ Tooth and Tail, a real-time strategy game that won for Best Character Design. Andy Nguyen, producer/designer at Pocketwatch, said that the studio won $3000 in cash and a Razer laptop.

“Intel Level Up has been one of the most beneficial and helpful awards contests for Tooth and Tail,” Nguyen says. “Intel has been a great friend to Pocketwatch for years. They understand indie development and have consistently gone out of their way to help the small guys. Intel’s support team is always quick to help us in a pinch.”

Changes for the better

The indie game-development community is rapidly growing, not least of which because computer systems in 2017 are very powerful, and getting the high-quality tools that are needed to construct a game is so much easier these days. When you look at a new game, you can’t tell if the title was built by a large team working at a major studio in a physical office space; or a handful of programmers and artists, all working out of their respective homes and collaborating over the Internet.

The Intel Level Up Game Developer Contest is providing a valuable showcase to some of these up-and-comers, and in some cases, helping them with resources and networking that’ll better enable them make the best game they can.

Do you think you have what it takes for your game to be among the best in 2017? The only way to find out for sure is to head over to the Intel Level Up Game Developer Contest page and submit your entry. Perhaps you’ll find that you’re the next Salmi Games or Pocketwatch Games.