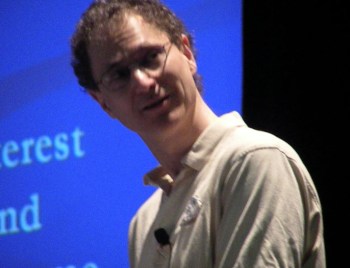 Intel will be launching its Larrabee chip next year — a chip that will live or die depending on how popular it is with game developers.  Which is why it saw some serious discussion at the Game Developers Conference in San Francisco today.

Mike Abrash, founder of RAD Game Tools, which makes video game development tools, took to the stage to pitch the chip to the audience. The chip is a hybrid of a  microprocessor and a graphics processor and promises to lower power consumption.

It’s clearly a key time for Intel to get the message out about Larrabee, since the company will need programs such as games to prove the value of Larrabee, and programmers need a lot of time to develop them. At stake are huge contracts to supply graphics chips to millions of game consoles of the future.

Abrash, who worked on the original Doom games and helped design the Xbox and Xbox 360 game consoles said he’s been working on new kinds of parallel programming techniques for five years and described how to program the Larrabee chip. The chip has many cores — Intel won’t say how many — on a single chip. A core is a processor, and in the case of Larrabee, each core is one of the original Pentium microprocessors. While those processors are slow by today’s standards, they become very fast and don’t consume a lot of power when you put a lot of them on a single chip, all working in parallel. That latter point is important because power consumption has become one of the biggest barriers to better chip performance.

Abrash’s talk, full of comments about such things as “common upconversions on load-operand” was almost entirely inscrutable to lay observers. But you could say this is the front line of the graphics chip war between Intel, Nvidia and Advanced Micro Devices. Intel hopes that Larrabee will help it break into high-end graphics — a market now dominated by Nvidia and AMD.

Larrabee is likely to be a source of litigation between Nvidia and Intel, since Nvidia chief executive mentioned yesterday how it uses Nvidia’s patented technology.

Abrash likes the architecture and called it the most fascinating graphics architecture he’s seen in 15 years, because it lets the programmer determine how to set up and perform tasks in parallel. He said the Pentium cores on the processor make it more flexible than a traditional graphics chip. And he described how Larrabee can be more efficient than traditional graphics chips at performing “rasterization,” or putting the pixels that make up a graphic image on a screen.

But it remains to be seen if other programmers will find Larrabee as easy to program as Abrash, who is among the super geeks of programmers. Abrash noted that another highly respected graphics expert, Tim Sweeney of Epic Games, had a lot of input into creating Larrabee’s architecture. To make parallel programming easier, Intel is introducing more than 100 new instructions for Larrabee.

Nvidia and Advanced Micro Devices have also given numerous talks at the GDC to help keep programmers on their side. But Intel’s platform is the newest, and Abrash’s talk was one of the more crowded ones at the GDC conference, drawing hundreds of attendees.

Abrash said that Larrabee isn’t likely to be as fast at raw graphics performance as other graphics chips, but it is power-efficient and flexible. It’s just another day in the graphics chip war.