This Facebook show was one of the biggest interactive events so far this year, and it was created by Pipeworks Studios, Genvid, and DJ2 Entertainment.

The show got 200 million engagements across 13 simultaneous 24-hour, seven-day-a-week livestreams as well as a weekly wrap-up show hosted by actor Will Wheaton. The show was a new kind of interactive experience that was partly a game and partly a reality show. The audience consisted of real people, but the characters they watched were AI-based.

“We’re very happy with how this first experiment went, and the key metric we’re focused on is the 100 million minutes watched,” said Genvid CEO Jacob Navok in an interview with GamesBeat. “That’s up there with any form of entertainment, which is pretty cool as a new intellectual property.” 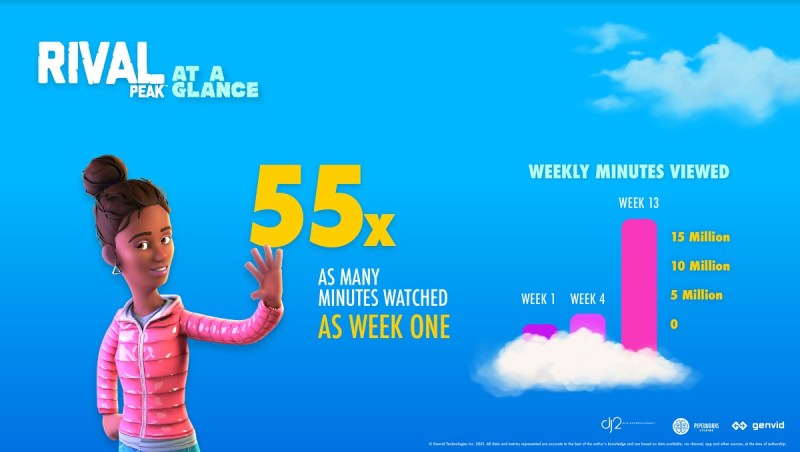 The show featured 12 AI characters who are contestants in a Survivor-like competition set in an animated Pacific Northwest. The live audience could influence the outcome by grinding away at tasks and helping their favorite characters.

“The things that got people the most excited were the story parts like romances between some of the characters,” said Navok. “People really liked the romantic storyline and the drama beats.”

Rival Peak was most popular on mobile devices and attracted viewers from over 70 countries, with the largest audiences in the U.S., India, Mexico, and the Philippines. Weekly minutes watched grew at a weekly rate of 40%. After one month, weekly minutes watched were up over 300%. By the conclusion, they were over 55 times greater than the first week.

Pipeworks CEO Lindsay Gupton said previously in an interview with GamesBeat that he had been talking about the idea with Navok for three years. No other company had the technology to pull off something like this, Gupton said. Pipeworks did an interactive stream on Twitch where the audience could vote on the results about five years ago. The developer tapped into tech like emergent AI and social broadcasting while Genvid made the interacting streaming technology possible.

Above: Rival Peak had a lot of interaction with the audience.

Navok said that Rival Peak was the first-ever entry into the new Massive Interactive Live Event (MILE) category. The audience cast millions of votes, solved millions of puzzles, and assisted the characters (or not) in completing tasks and prioritizing goals. Viewers collectively influenced the direction and outcome of Rival Peak while individually helping the characters survive the wilderness and avoid elimination.

“The most sticky content we could generate that got some of the highest peaks in terms of concurrence was when we had streamers come on and talk about what was happening,” Navok said.

The TV show will be available through videos inside of the app now.

The live show had its challenges, as one segment fell off schedule because COVID issues interrupted the production. The team had to create an alternative rerun episode in a scenario that involved a crazy hacker taking over.

“It was crazy and none of this was part of the original plan,” Navok said.

Android accounted for 84% of the users. iOS was 12% (as it came on that platform at mid-season), and the PC/Mac was 4%. Facebook sponsored the show and broadcast the event.

“The global nature of it was really cool,” Navok said. “It’s not just North American and Europe. It’s India, Southeast Asia, the Philippines, Latin America, and Brazil. The biggest lesson is you never know what your biggest markets could be.”