VB: So actually, there are quite a few, a handful of developers, different studios, that have been working on Modern Warfare 3. Can you break down who did what?

MR: Yeah, sure. So the game’s basically co-developed between Infinity Ward and Sledgehammer Games. Those are really the two developers. Now, one of the things we did when we formed this union is, we didn’t want to just… “You go off and do this, and we’ll go off and do that.” Not like, “You do single-player, we’ll do multiplayer.” We didn’t do that, we didn’t just divvy it up and go off in our own directions and make a game and then come back like, oh, I hope this works together. That’s not how we wanted to do things. So basically we co-developed a design. We would have… We would fly up to San Francisco, they would fly down here. We were designing out the different parts of the game. And then we said, okay, you guys start working on these levels, we’re gonna start working on this stuff, and then crossed over working on those levels. So for instance, we did some of the art on their levels, and they did some of the art on some of our levels. It was really just a matter of, let’s divvy up tasks as if it was one big team and work on it that way. We also got support from some other studios. A little bit of support from Treyarch, some support from Raven, those were more sort of… Giving them things to do. So for instance, if some of them… That sounds kinda weird. Some of them had some skillsets in a certain thing that we were going to add to the game. “Hey, this guy has worked on that before, he really knows that. Let’s move those tasks over to those guys and have them help out.” That’s really how the development was done. Sledgehammer and Infinity Ward were the designers of the game, the main implementors doing the bulk of the work. Then some of the other studios like Treyarch and Raven and Neversoft helping out, just doing pieces, it’s just piecework. “We really have some cool ideas for some security sets, so let’s have them come in and do some of that.” It was, from my perspective, as an executive producer… The challenge of managing all of that was immense. It’s the hardest game by far that I’ve ever worked on. But it was actually a very positive experience. We got a lot more done on this game than we ever did in Modern Warfare 2 for instance. There’s a lot more changes. Some of the changes you notice, some of the changes you’ll never notice because they’re all behind-the-scenes stuff. But we got a lot of stuff done in this game that we’ve never been able to do before, because we had a larger band of resources. And we also, actually, some of the great stuff is, you bring in a studio like Sledgehammer, they’re new to the franchise, they can bring in some new ideas. Some of them were like, yeah, we had already thought of that, we didn’t feel like it was necessary, but some were like, yeah, that’s a really cool idea, we never thought of that, let’s roll with that. It worked out.

VB: It sounds like a collaboration with that many studios would be a total cluster, but it seems like, here you guys are two years later, and you have a very impressive-looking game, so… It seems like maybe you need a raise or something. Going back to… What’s it been like carrying the torch since the mass exodus at Infinity Ward, carrying on the franchise?

MR: It’s been extremely challenging. I mean, I’ve been there since the Call 2 days…

MR: Everyone has their own favorites. It has been difficult. It’s been extremely challenging. If you think about it, there’s so much pressure already on the team, trying to keep the team from fraying. Not just from the exodus of people, but from the pressure of having to do a follow-up to a game that was so huge, and a follow-up to Black Ops, which was so huge. There’s so much pressure, so many pressures there, and then the pressures of having to work with other studios… There’s a lot of pressure on the team. That’s something that is… Part of my job is to manage the whole team, the whole studio. We’ve done a good job, I think, everyone’s really happy about the event, for instance, and about the reception of the game….

VB: But you’re due for a vacation?

MR: I’m really due for a vacation. But I probably won’t get one.

VB: So, couple last questions. Now that the Modern Warfare trilogy is kinda coming to a close, are there any concerns that Activision could shutter Infinity Ward?

VB: Think you have a good chance of sticking around?

MR: Are you kidding me? Yeah. Think about what we’ve created here. This is a phenomenon in gaming, there is nothing else in gaming that’s similar to this.

VB: Which is why it gets its own event.

MR: It does, it’s true. But I mean… On Modern Warfare 2 we had something like 32, 33 million people play the game. There’s nothing that comes close to that. No game in the world comes close to that, in the same arena. Maybe in iPhone games? MMOs don’t hit those numbers.

VB: I dunno, the Koreans get pretty crazy over those free-to-play games…

MR: That’s true, the free-to-play games are a tough one. But the thing is, you create an account on a free-to-play and you never play it again? They still count that. So… In an arena where you can base off sales, there’s nothing quite like it. And nothing as mainstream as Call of Duty. Celebrity sports stars constantly talk about how they’re playing Call of Duty all the time. I talked to a Formula One guy, he has this crazy workout schedule where he rides a real bike on a treadmill, so he has to keep balance, and he rides the bike and plays Call of Duty. That’s his multitasking, working out at the same time. 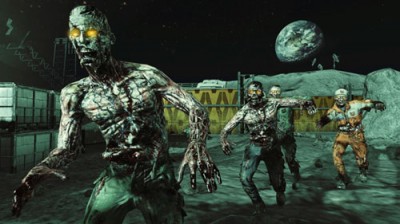 VB: Treyarch has had a ton of success with their Zombies side-game. Has there ever been any interest or thoughts of implementing something similar in the Infinity Ward titles?

MR: Well, the zombie thing is, first off, awesome. I love zombies. But I think, instead of trying to take that idea and roll with it ourselves, we wanted Treyarch to continue ownership of that. So we wanted them to still have… This is their thing, this is their baby that they created. Let’s…

VB: You don’t maybe want a mode called “Aliens” or something…?

MR: [laughs] That plays just the same? Eh… We’re not going to try to copy that. I think letting them have that as a part of their unique features when they release is the smart way to do it. For us, it’s more about just trying to come up with other new modes for us. If you’ve played Survival mode at all, there’s some similarities, the wave-based… But it’s a different experience, totally. I don’t know if you’ve had a chance, but you should play it. It is the wave after wave of guys, but it’s so much more frantic, because they aren’t slow-moving zombies. Guys with guns and stuff, dogs that explode. It’s pretty insane.

VB: We haven’t talked at all about multiplayer, so…we’re not going to. Just tell me what your favorite multiplayer experience has been, whether it’s here playing with people at XP or just testing internally. What’s been your crazy grenade nut-shot moment or whatever you’ve got?

MR: Well, you gotta make me think about it, it’s not one I’m prepared for. Crazy moments…

MR: Nah, he sucks. I think for me, honestly, I was standing yesterday downstairs, when I finally got out of some interviews. I was watching the pro teams guys, the guys who are competing for a million dollars, I was watching those guys play and I’m just like… Wow. These guys have been here for just a day, the 12 hours of the day, and they’re really good. They’re totally into it. You watch them and they’re really getting into it. I think the whole competition, watching a tournament play out for that big of stakes, has been a huge… Really fun for me. I’d never really seen that before.

VB: So your most rewarding Modern Warfare moment was watching other people play?

MR: It really was. You know what, though? It may sound strange, but honestly, from a dev’s perspective… And this is any game. When you make a game, your head’s down and you’re making that game, that game becomes part of you. When you see somebody else play it, that’s one of the best moments as a game developer. That may be less PR-sounding, but it’s the right answer.