When Apple released iOS 7 to developers, it also introduced its own game-development engine called SpriteKit that only works with the latest version of its mobile operating system. Today, developer Space Inch released what Apple confirms is the first full iOS game built entirely using the new tool. 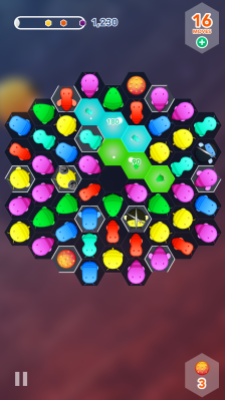 Disco Bees is a puzzle-matching game starring those honey-loving insects. It mixes up the familiar genre by using a honeycomb-style hexagonal play field rather than the common Bejeweled or Candy Crush grid. Disco Bees is available now for free through the iTunes App Store.

Of course, the most interesting thing about Disco Bees is that Space Inch decided to use Apple’s new iOS 7-only gaming SDK.

“We built Disco Bees from the ground-up exclusively for iOS7 using Apple’s new SpriteKit game engine,” Space Inch lead developer Andy Ross said in a statement. “This let us go very quickly from concept to a polished game, and having only one OS to support made things dramatically simpler. The high upgrade rates of iPhone and iPad users means that almost everyone with Apple devices will be able to play.“

Just a few weeks after Apple released iOS 7, more iPhone and iPad owners were rocking the new software than iOS 6. That means Space Inch will have a large enough audience to sell Disco Bees to.

In addition to its optimization for iOS 7, SpriteKit uses an easy and familiar development environment. The SDK is similar to the popular Cocos2D engine, and Apple designed it specifically to render 2D objects at a smooth frame rate. The engine is also compatible with MacOS.

Of course, SpriteKit’s tightness with iOS 7 and Mac means the studio would have issues porting Disco Bees to Android or older iOS versions, but that’s a problem for future Space Inch. Present-time Space Inch is happy to have a game exclusively for iOS 7.