Sales of the iPhone 6S drove a spike in popular free iOS daily downloads in October, with consumers installing a total of 7.9 million popular apps, according to that month’s Fiksu Indexes, released this morning.

Downloads of the top 200 most-popular free apps in the Apple App Store were up 23 percent compared to September and slightly higher compared to last year, the mobile marketing tech company Fiksu reported as part of its App Store Competitive Index. Last fall’s numbers were buoyed by the release of the iPhone 6.

In both this year and last, these new device sales not only drove customers to redownload all their favorite apps, but also contributed to a drop in the cost to acquire a loyal customer, since so many of those apps were ones to which customers were already committed.

Fiksu’s Cost Per Loyal User index fell 3 percent from September to $4.01 despite rising advertising costs, according to the index.

“Due to the widespread adoption and popularity of the new iPhone 6S, users were busy downloading their ‘vital apps’ on new devices — apps they have a higher propensity to keep and use,” the company said in a report accompanying the new indexes. “That tendency towards loyalty offset some higher media costs and kept CPLU down.”

Those increased media costs drove the Cost Per Install, which doesn’t take loyalty into account, up to $1.72. That’s a nearly 20 percent increase from last year.

“Unsurprisingly, advertising costs are high leading up to and during the holidays, but the flurry of app usage also increases the supply of in-app advertising inventory, which has a moderating effect on overall costs,” the report said. 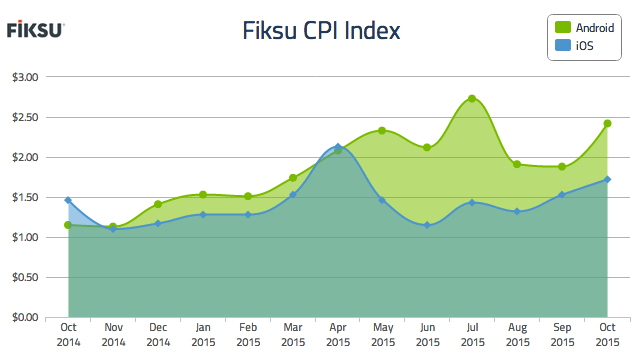 Above: The Fiksu CPI index for iOS and Android marks how much app makers are paying per user download to market their product.

Android downloads continue to cost their publishers nearly $2.50 per install, a drop of 10 percent from last month but a whopping 110 percent higher than last year.

This is the third month in which Android CPI has more than doubled last year’s costs, the report said. That’s bad news for app makers attempting to reach more users, but potentially good news for the other apps and sites in which they’re advertising.

“During the Thanksgiving break, we expect to see an influx of downloads on new devices, particularly as friends and family share downtime and even their favorite apps,” said Fiksu chief executive Micah Adler in a statement. “With nearly 20 percent of millennials finding new apps through friends and family, this time of the year is a key period for marketers to acquire more of the right, loyal users.”