Many mobile game developers launch their titles on both iOS and Android at the same time. But there’s a batch of talented iOS game makers who prefer creating exclusives on Apple’s platform. They think that Android’s fragmentation makes it too hard to do simultaneous launches.

In 2017, games made up a larger share of Google Play’s consumer spending compared to iOS, but consumers spent nearly two times more on iOS games than on Google Play games, according to a year-end report by market researcher App Annie.

At the Game Developers Conference, I was able to sit down and chat with three all-star iOS game developers: Dan Gray, head of studio at Ustwogames, maker of Monument Valley and Monument Valley 2; Zach Gage, maker of SpellTower, TypeShift, and Ridiculous Fishing; and Ryan Cash, founder and creative director at Snowman, the creator of games such as Alto’s Adventure and Alto’s Odyssey.

Here’s an edited transcript of our interview. I also interviewed Apple vice president Greg Joswiak about the importance of games to Apple. 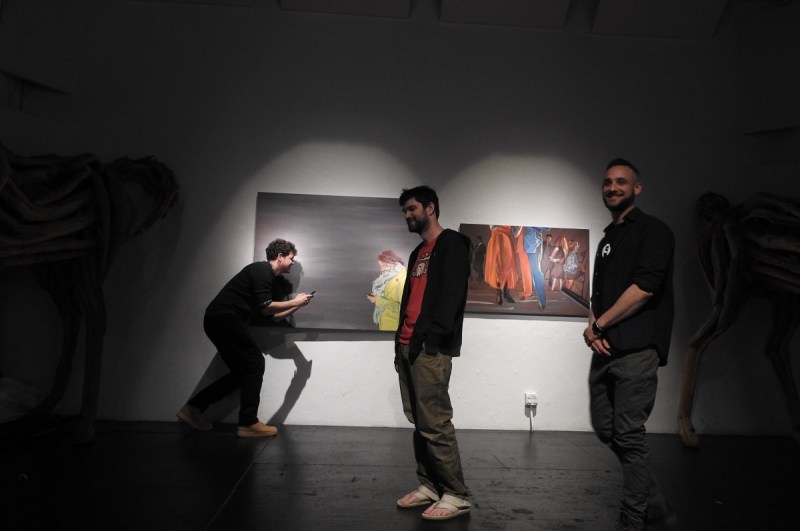 GamesBeat: How many years has it been on iOS for each of you?

Dan Gray: Since the beginning, really. We were talking about this recently. Ustwo in general, the thing that kicked the studio off was iOS, from a design perspective. The company’s been working in mobile about 12 years

Zach Gage: I think I’ve been doing it since before the iPhone 3G, but I wasn’t right when it started. A couple of months into it. The App Store was open by then.

Ryan Cash: I used to work for a software company that made productivity software. They were there on day one for the iPhone, and same for the iPad, being a Mac software company before. I left in 2012 to start my own company. That was our first year in the App Store as Snowman.

Gray: Before I turned up, we made a voice replication app. You’d hold the phone up to your mouth and talk into it and create all these different crazy mouths and noises and stuff. It’s the sort of thing you’d make at the beginning of the App Store.

GamesBeat: To what degree are you exclusive to iOS now or not?

Gray: Monument Valley one and two were both exclusive to iOS for a short period, and then we did the Android version later on.

Gage: All my stuff is focused on iOS. Another company ports my games to Android eventually, but it’s whenever we can get it together to do the contract and have them port it. It’s not a set thing. But for me, I’m focused on iOS stuff.

Cash: That’s the same for us. With Alto’s Adventure, it took us about a year to get to Android, and we had another company do that. Our focus is on iOS first.

GamesBeat: Why is that?

Cash: For us, it’s been the bread and butter since the first iPhone was announced. That’s all I know. But I think more than that, it’s for a number of reasons, one of them being that we know people will experience the products we make the way we intend them to. We know exactly how we’ll experience the product. We know all the color will look the same. We don’t have to account for device fragmentation, OS version fragmentation. But it’s more that the way we want you to play our game and enjoy it, you’ll be able to do it. On other platforms we’re not as sure.

Gage: That’s a big thing for me too. I came into this originally from doing fine art, doing interactive art, and so the idea that you—the first thing I released was a thing called Synth Bond, which was basically a sound toy. Coming from interactive art, it was this amazing experience. I’m used to dealing with lots of different kinds of technology, putting them in a gallery and trying to get people to understand how they work. Now everybody has this one piece of technology in their pocket all the time, and I know exactly how it works. I can design a ton of different experiences that I know will pan out for them in a certain way.

Especially for me, as a solo developer, trying to deal with something that’s as fragmented as Android and the Google store—it’s a lot harder. That’s one thing as far as why I’m not focusing on Google. The other thing is, iOS is such an exciting space, because it’s where the people I want to reach are. It’s the people that appreciate good design. Basically normal human beings who don’t really care about games. You make something and suddenly they can play it.

To me that’s a much more exciting audience than developing on consoles or PC, where there’s a more crunched audience that really cares about games, that are very fanatical about games. I’m interested in games being able to break out of the game space and become a normal cultural institution that people are interested in, like music or movies or whatever.

Even though it seems like that kind of thing would have potentially less power, because people aren’t as directly and intensely engaged with it, I think that ultimately that kind of medium and position in society has way more cultural power, because it becomes this passive contributor to the things that people are thinking about, the way they talk, the way they approach things. To me that’s why it’s exciting and why doing stuff for mobile is particularly interesting.

Gray: I joined the company five years ago to basically set up a games team. The way we set up the games team was to look at what we perceive to be the values of Apple. We wanted to launch our games on this platform, and we set ourselves up like, what would a first-party Apple studio look like? Which is basically what happened.

It’s things like, everything we make had to feel precious. It had to feel not necessarily just like entertainment, but have value. We wanted to have amazing attention to detail in everything we made, and make people feel special when they played it. Those values, between the hardware we’re delivering on and the games we’re making, lined up perfectly. It’s done all right for us so far.

GamesBeat: Did you view yourselves as Apple fans at the start? Or more just valuing the things Apple values?

Gray: No, we already were. Even before I turned up at the company, it was all about Apple. Our relationships were always with Apple.

GamesBeat: The common wisdom seems to be that if you do Android and iOS at the same time, you reach the widest possible market. The business decision is to do as many platforms as possible. But in some ways I’m starting to hear that it’s a business decision for you guys to do iOS first.

Cash: Another reality that can often be overlooked is that for small teams, it’s just not an option to do that many platforms at once. For us, we have to prioritize not only the platform that works the best, but also the platform that fits our products the best. We would have to delay the shipping time by many months if we wanted to hit both platforms at the same time. Because of the things that Zach and Dan both mentioned, which I also agree with—it’s just, why put in that extra six months or whatever it is to do something for a platform that just isn’t as good, quite frankly?

Gray: We had a big delay on Monument Valley 2, obviously, between the iOS version and the Android version. People asked what was taking so long. We once took a photograph and laid out all of our Android test devices on the floor. It was 80 devices in the middle of the studio. “We’re working as hard as we can!”

Gage: There’s a tendency with how many businesses are run, and how most consumers and technology watchers think businesses are run—everyone assumes that every business is run to scrape every single penny off the sidewalk that they can. I think that the reality of running a business is not at all like that. You don’t sit down and say, “How can I make the most money possible?” For me it’s more like, “How can I do the thing I love, stay happy, get something out that people enjoy that represents me, and do it in a way that keeps me afloat?”

If I can do all of those things, I’m good. I don’t need to stretch out the box into spaces where I’m not comfortable, or where I think the product may end up getting damaged or not presented in the way I want.