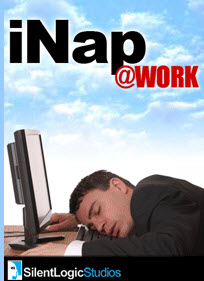 A new iPhone app lets you nap at work in your cubicle without fear of being caught.

The iNap@Work app makes office-like “productivity noises” so that your co-workers will hear a constant din of activity coming from your space. Even though you may be snoring, your workers will hear sounds like typing, mouse clicks, flipping through papers, stapling, and human sounds such as clearing your throat.

All you do is adjust the settings on the iPhone touch screen to pick the sounds you want to simulate. You can adjust the frequency of sounds to simulate either a light or a hectic work day. You then click on the Start to begin your nap time and Stop when you want to do some real work.

Yes, this is one of those only in America stories, and only on the iPhone. And why not? If apps such as iFart can become wildly popular on the iPhone, this one ought to have its day in the sun and help drive Apple toward a billion app downloads. Clearly, it’s a novel idea and it would be great if it let its owners quit or redefine their day jobs. It’s got a lot of competition with 37,000-plus apps available on the iPhone, but most of those aren’t as silly as this one. 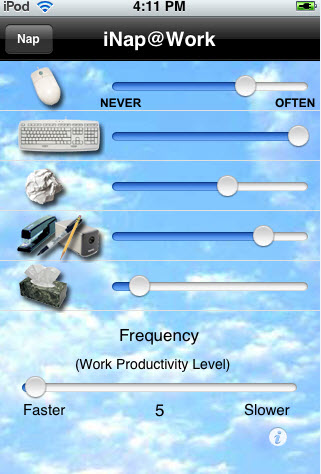 iNap@Work is the product of a two-man show. Trieu Pham came up with the idea and approached Alvin Wong, owner of Silent Logic Studios in San Jose, Calif. Wong has developed a couple of video games for the iPhone. The duo have funded the project themselves for several months.

Of course, since we’re talking about iPhone entrepreneurs here, there already is some competition. Brainwave Apps has created a Power Nap app. But Power Nap creates soothing sounds that let you take a nap. It doesn’t try to disguise the fact that you are napping. Another nap-related app is iNap: Arrival Alert, which lets you set an alarm on your iPhone in case you need to nap on a train.

Pham said he came up with the idea and thought it was funny enough to give it a shot. Even if people don’t really use it, they can show it off to their friends at the watercooler. The app is available in the iTunes App Store now or it can be purchased at the web site for 99 cents. Wong’s Silent Logic Studios has been around for nine years, developing mobile games for a variety of platforms. Its games include Flyz, Gravulous and Jungle Defender.