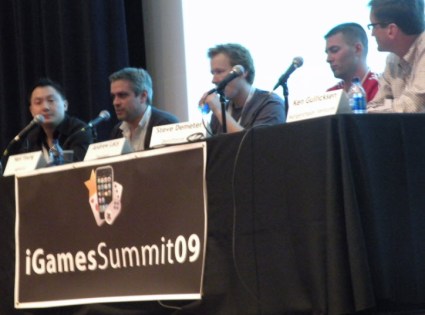 There were a lot of happy game developers among the 200 or so people who attended Thursday’s iGames Summit in San Francisco, which was devoted to iPhone games.

Speakers at the summit, including game developers such as Tapulous, ngmoco, Booyah, Demiforce, Zynga and Social Gaming Network, were excited about Apple‘s announcement that its iPhone 3.0 update, coming this summer, would have a number of game-friendly features: a virtual goods platform, Bluetooth multiplayer, and peer-to-peer connectivity.

With more than 30 million iPhone and iPod Touch users to target, the developers see more potential to make lasting businesses. By accident or design, Apple has created a vibrant game ecosystem that keeps getting stronger.

“Everywhere else I go, people are talking about how to survive,” said Ken Gullicksen, a partner at Morgenthaler Ventures who moderated a panel at the summit. “In [the game] market, people don’t talk about that. The animal spirit is alive and well and there is an enormous amount of excitement here.” 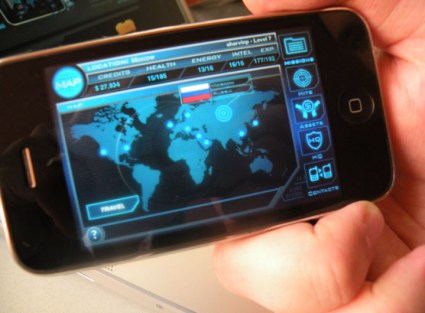 Steve Demeter, founder of game studio Demiforce, said he always wanted to make a game on his own terms, and the iPhone’s easy development tools and AppStore allowed him to do that and to start selling it. His hit puzzle game Trism was a top seller on the iPhone last year, even though his company has just a few employees.

But successes like Demeter’s are now against the odds. With more than 6,700 games on the iPhone, and more than 2,000 of those free, according to Mobclix, it’s becoming harder for developers to draw users to their games. Venture-funded companies such as Ngmoco, Zynga and Social Gaming Network are moving in fast. If your game dips below the top 100 games, it’s almost impossible for users to discover. Apple highlights cool games on its web site, but being selected is like winning the lottery. While viral social games spread from friend to friend, it’s easy to get lost.

But the speed with which the iPhone has revived the moribund mobile games market is still measured in months. Tapulous, a pioneer in the iPhone game space with its music-oriented games, for example, was founded only 26 months ago. Neil Young, chief executive of Ngmoco in San Francisco (and a GamesBeat 09 speaker), said that the iPhone as a game platform is as momentous an event as the launch of the first Nintendo game console, the debut of Microsoft’s Xbox Live online games service or the launch of the first massively multiplayer online games.

The difference, Young noted, is that Apple has thus far decided not to make its own games and has focused instead on making a platform that is attractive to game developers. If Apple had focused on its own game division and favored it the way some console makers have done in the past, it might have stymied development.

Gamers have shown they’re willing to download games. Now the challenge is to get them to play more. Young said that the average game session on short games such as Ngmoco’s Maze Finger is eight minutes, but the longer game Rolando has gamers playing for 22 minutes per session. The latter suggests deeper engagement with the games that parallels game sessions with the Nintendo DS.

As the games get more sophisticated, heavier investments in engineering, marketing and PR become necessary, raising the need for venture capital, Young said. It’s more important to upsell or cross-sell users from one game to another to help new titles take off. Pretty soon, big developers and publishers will have to start looking at the iPhone market the same way they do the Wii.

“It would be silly to think that the iPhone is not a threat to traditional gaming,” said Brett Seyler, general manager at game tool maker GarageGames.

Keith Lee, chief executive of startup Booyah, predicted that the iPhone and iPod Touch installed base would reach more than 100 million by the end of 2010. That’s far faster than the nearly six years it took for the Nintendo DS to reach the same number.

“It has gone viral, like the moment your mother said she wanted a Wii,” Young said. 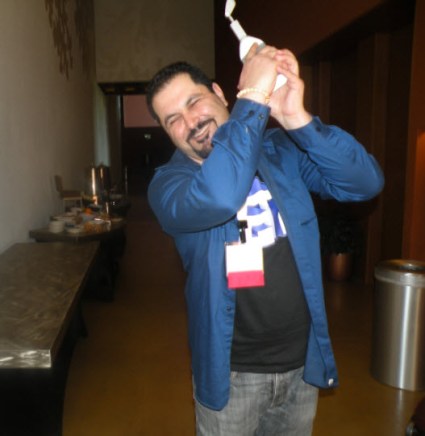 That doesn’t mean it’s time to count other platforms out. Andrew Lacy, chief executive of Tapulous, said he expects the Google Android, Palm Pre, Nokia, Windows Mobile and RIM BlackBerry platforms are all likely to see good growth in the coming year as smart phones replace older phones at a fast clip. But Lacy said it will become much tougher to support other programs if it means hiring a couple of hundred programmers to adapt games to run on all of the other platforms.

It’s clear where the momentum is. Young said Ngmoco generates more than half of its revenue from outside the U.S.

Shervin Pishevar (pictured), chief executive of SGN, said that his company has seen more than 10 million of its games installed on the iPhone since the first one launched in September. He showed off a prototype accessory that attaches a toy golf club to an iPhone. When you swing the device, the iPhone’s accelerometer detects the movement and reproduces the swing in the golf game.

Developers are excited about the upcoming virtual goods platform, which will allow them to let users play games for free but pay for individual items inside the games. Pishevar said his company’s (fluff)Friends virtual pets game is generating $50 in virtual goods sales per spender per month. When the iPhone 3.0 software launches this summer, iPhone games will be able to generate those sorts of revenues.

Ngmoco’s Young said developers are now trying to come up with second-generation iPhone games that make use of more features of the iPhone, such as its ability to store a music library, access the web, or hold contacts for friends.

The iPhone market is also becoming more mature, with companies such as Aurora Feint and Viximo coming up with tools that make it much easier to add social elements to iPhone games. Mark Pincus, chief executive of Zynga, said he was glad that Facebook Connect — which introduces a way to import social networking data across platforms — will provide basic plumbing for social games on the iPhone. Brian Balfour, founder of Viximo, said the company makes money selling its own applications but will also try to provide a one-stop solution for everything that a developer needs to make a game go viral.

“We’re at an exciting time for virtual goods, iPhone sales, and gaming, with all of it coming together,” Balfour said.