The world of 1920+ fascinates me. I’ve long been into alternative history, such as the works of Harry Turtledove. In 1920+, World War I came to a different end, one that wasn’t conclusive (and full of steampunk mechs, too). We’ve seen hints of this place in the board game Scythe and in the work of Polish artist Jakub Różalski.

1920+ comes to life, though, in Iron Harvest, a real-time strategy game from King Art Games. It’s a game about “the next war” after WWI, one that starts as the fragile peace between Polania, Rusviet, and Saxony collapses. It came out in 2020, and the studio and publisher Deep Silver released its first DLC in May: Operation Eagle, which brings America to the conflict.

This isn’t the United States of America, however. It’s the American Union of Usonia, what King Art game designer Elliott Verbiest says is a constitutional federal republic consisting of semi-independent states. He notes this setup is much like the contemporary U.S., but it reads more like a system under the old Articles of Confederation.

“The borders of Usonia, however, differ a bit from its real-life counterpart, with the Alaskan region still owned by Rusviet, among others,” Verbiest says over email. Fort Ross on the Sonoma Coast (a preserved fur trading outpost) is one of the few remnants of Russia’s one-time presence in Alaska and the West Coast of our America.

The name “Usonia” is similar to the United States, echoing an aspect of our world (as Rusviet does for Russia, Saxony does for Germany, and so on). And it does have roots in our world, a term coined by noted architect Frank Lloyd Wright.

“‘Usonia’ is directly inspired by the term suggested as an alternative demonym in the early 20th century for citizens of the United States, with the goal of differentiating these people from the other populations living on the North American continent,” he said. “We felt the term was a great aesthetic and thematic fit for the alternative United States of 1920+.”

The Union’s story differs in some significant ways from our own, but others remain the same … such as America’s sins of taking land and lives from indigenous peoples and enslaving Black people.

It started with European colonization.

“Various nations began attempting to establish colonies in the Americas in the early 17th century much like in our timeline,” Verbiest said. “Which nations attempted to do so (and which succeeded) is a mystery we’d like to keep for a little longer for now.” 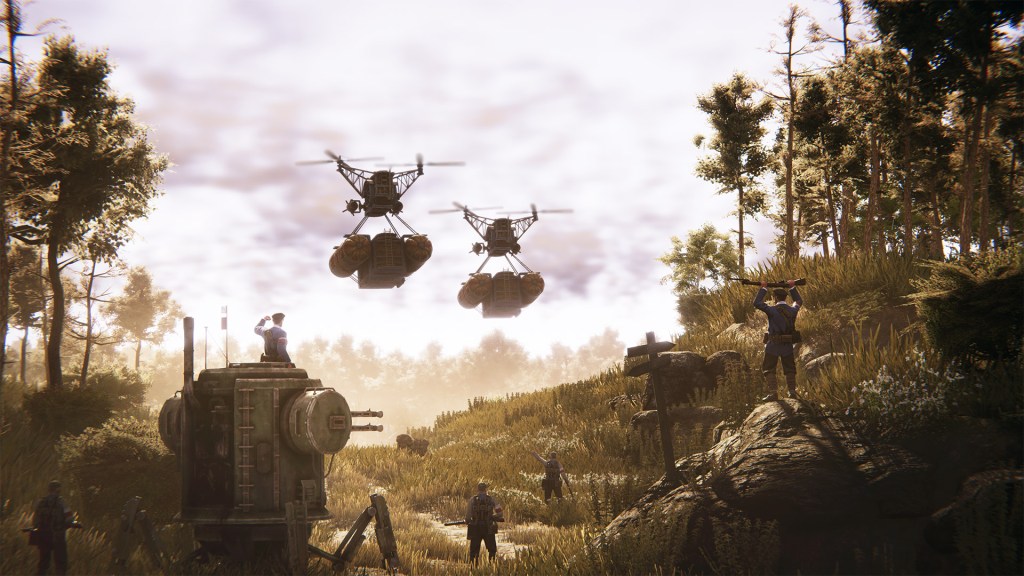 Above: Choppers appeared earlier in 1920+ than in our world.

As in our timeline, the American colonies rebelled against their home nation (Verbiest declined to say whom), and Usonia came into being. And like America, this new nation was ambitious and expansionist, taking over indigenous land.

And like our United Stats, Usonia fought a civil war. But this wasn’t over slavery. It was over its treatment of indigenous peoples and taking over their lands.

“A series of high-profile mass displacements were the inciting event for a civil war that became the deadliest conflict in the nation’s history,” he said. “The war led to a cultural shift away from expansionism, with Usonia even ceding some territory, particularly in the Midwest and Pacific regions.”

Usonia and indigenous people now live in what Verbiest terms as an uneasy peace. Some call Usonia home, while others have formed independent states in the Western half of North America.

And like our U.S., Usonia has never fessed up to the damage it has done to native peoples or cultures.

“Despite relinquishing some territories, Usonia has yet to formally acknowledge the full extent of the harm that was committed, an uncomfortable fact that directly conflicts with the nation’s proclaimed ideals of liberty and justice,” he said.

Slavery of Africans also existed in this world. While the Usonia’s civil war didn’t focus on slavery, nor did it have a counterpart to the Confederacy,

“The colony projects that would become Usonia were a destination for the Atlantic slave trade. Over the course of the 30-year War for Independence, however, Black people were integrated into army units either as slaves seeking freedom, or free people looking to expand their civil rights,” Verbiest said. “The high-profile exploits of these soldiers to help end the conflict made them war heroes, catapulting their demand for equality into the spotlight. The shift of public opinion in favor of abolition, along with the concentration of wealth into urban areas and the destruction of the traditional upper-class system, led to the collapse of slavery in Usonia within a generation of the war’s end.

“Though racial tensions still persist, full rights and suffrage were granted, with several mechs and airships in the Usonian arsenal now named after these Black patriots.” 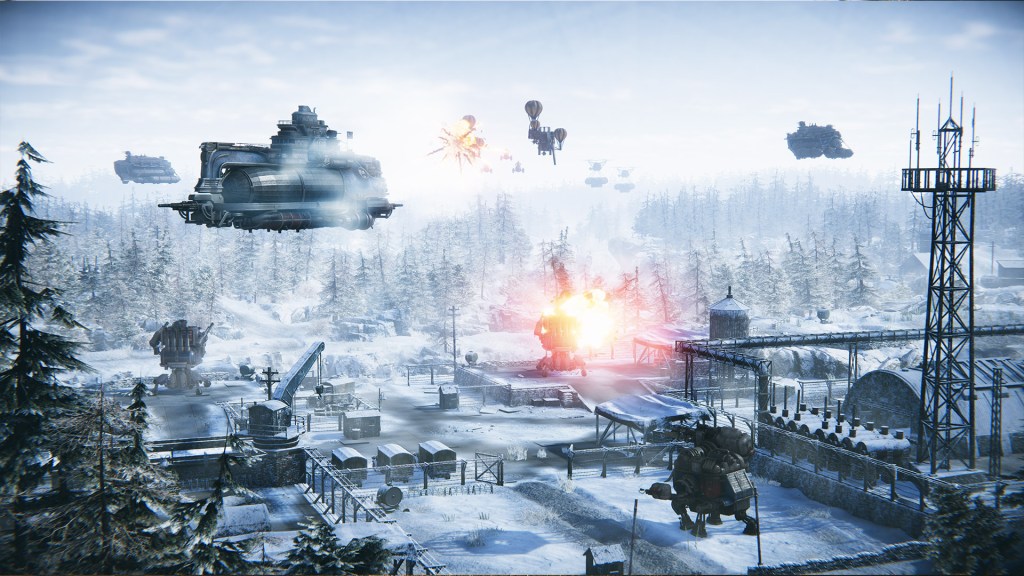 Above: The big airship looks more suitable for the seas than the skies.

The Entente may have won World War I, but the true victors were the United States and Japan. Both nations emerged stronger, either with a richer economy and treasury (the U.S.) or with more territory and resources (Japan).

In 1920+, Usonia didn’t fight in WWI, but it did keep the United States’ role as the armory and bank, though this nation supplied multiple sides of this war. Usonia is known for its airships, and you can see how it played both sides in the air units of different factions.

Besides the obvious benefits to selling food, munitions, and raw materials to the belligerents, Usonia and the United States both shared another trait — isolationism.

“Public opinion in the nation was heavily divided as to whether Usonia should formally intervene within the war. Usonia had previously won the Hispanian-Usonian War a few decades ago, acquiring several of Hispania’s colonies as a result. This sparked several insurgencies in these colonies, as well as intense debate on the homefront about the wisdom of what seemed to be a return to expansionism. This combined pressure resulted in Usonia formally remaining neutral during the war,” he said.

One of the most striking aspects of Usonia in Iron Harvest are its air units. It pioneered aircraft, but this story isn’t about how the Wright Brothers made their big flight in Kitty Hawk, North Carolina. Instead, it’s more about steampunk dirigibles and 1920+’s take on the legendary feud between Thomas Edison and Nikola Tesla.

“Many of these innovations were pioneered by the Edison Electric Company, although critics and Tesla himself claim the initial designs were stolen or plagiarized from Tesla’s well-known factory,” he said.