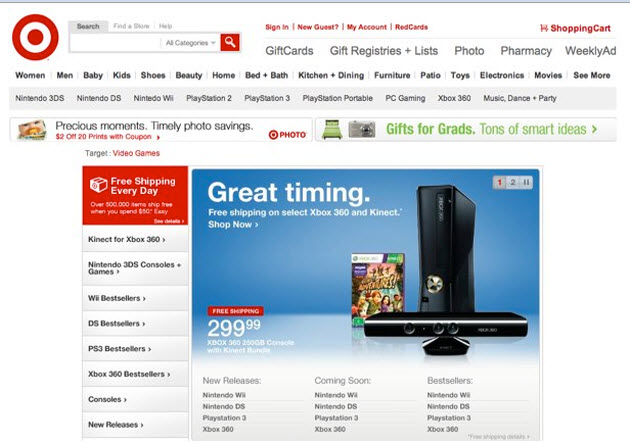 Microsoft may be preparing to cut as much as $100 off the cost of its most expensive version of the Xbox 360, according to Engadget and other web sites.

The ad shown above offers the Xbox 360 bundled with Kinect and a free Kinect Adventures game for $299.99 with free shipping, more than $100 off the current $399 price. In advance of the E3 trade show starting in a week, the new price may be one of the big pieces of news that Microsoft could be getting ready to unveil. If you go to the Target web site now, you still have to pay $399.99 for the bundle upon checkout. It could be that Target jumped the gun on a price cut that isn’t taking effect until E3. We have asked Microsoft for comment, but the company has declined.

The bundle includes the game console and Kinect, which is Microsoft’s motion-sensing system, and a copy of the Kinect Adventures Game.

[Update: Target says it has become aware of the “mispriced” bundle and has now corrected the price to the proper $399. That could be the end of the mystery].

If I had to guess at this one, I would say that this price cut is very unlikely. Microsoft is leading the industry right now in terms of sales, and the only real reason to cut prices this much is if the company had something to launch at the $399 price point. As far as we know, there is no such new product coming. So why would Microsoft cut its price when it is outselling both the Nintendo Wii and the Sony PlayStation 3? On top of that, hardware sales aren’t doing so bad. In April, game hardware sales were $279.9 million, up 12 percent from $249.5 million a year earlier, according to market researcher NPD.

If the image above is correct, then perhaps only Target is planning to make such a price cut as part of its own strategy to gain market share among retailers. But that would pretty much eliminate Target’s margins and turn each bundled 360 sale into a loss leader.