Things haven’t been the same in mobile games since Flappy Bird came and went earlier this year. But SkyVu Entertainment chief executive Ben Vu hopes his company has the next best thing with Let It Goat, a zany 8-bit title that riffs on the popular song “Let it Go” from Disney’s most recent animated hit, Frozen. 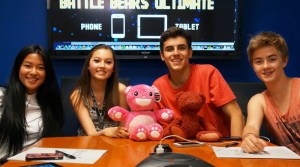 Two high school interns made the game for SkyVu in Omaha, Neb. The company released the title yesterday, and it shot up the iOS U.S. charts to No. 3. It has settled back down at No. 7 for all free apps, but SkyVu is now pulling out the stops to publicize the game to the fans of Battle Bears, its mobile game franchise.

Its hashtag, #LetitGoat, is now ahead of the Kim Kardashian: Hollywood mobile game’s hashtag. Let It Goat was the top U.S. Twitter trend yesterday.

In the game, you play a goat. You run sideways and have to jump over obstacles. If you miss, you die. It has cute sounds and plenty of splatter when you impale your goat on a spike. And like Flappy Bird, it’s not that easy to play.

“We’ll see if the game sticks but things are looking good so far by the thousands of tweets and 2,000-plus reviews that are almost all 5 stars,” Vu said. “The feedback from fans is almost identical to what we saw with Flappy Bird. Our Battle Bears games even got a nice uptick in downloads thanks to the high traffic from Let it Goat. We didn’t think the game would do this well and are excited about making new updates and building out this new intellectual property further. We believe the wacky casual nature of the Let it Goat sits nicely next to our established Battle Bears franchise.”

SkyVu has a skunk works department dubbed SkyLab, which operates under the company’s marketing department.

“This year we decided to invite some high school interns to help out with some SkyLab projects and Let it Goat was one of them,” Vu said. “A simple endless 8-bit runner game that the team could produce in approximately 8 weeks. The young interns brought an incredible amount of new ideas for the game and through our collaborative process we came up with a very catchy but simple story.”

The game character is named Mounty. His goal is to hop over as many spikes and zombies as possible. To assist, Wil the Battle Bear can carry Mounty on his back and sacrifice himself so that Mounty can run farther.

“We tested the game on the interns and their friends and each iteration got better and better,” Vu said. “We got the app approved last week.”

The free-to-play game has one in-app purchase along with iAds, or Apple’s in-game ads.

“We mobilized our large Battle Bears fan base on launch day and Jack & Jack who each have over a million Twitter followers tweeted out the game link,” Vu said. “We are now working with Jack & Jack on more Let it Goat updates in addition to a new casual game later this year. They have built a massive following on Vine and are growing into other platforms like iTunes, Twitter and YouTube and we believe that our well designed games perfectly fit their growing brand as well as ours. We’re super excited to be working with local Omaha talent to build great games.”

Two of the high school students, Jack Gilinsky and Jack Johnson (known as Jack & Jack), have Vine accounts with more than a million followers. They’re celebrities in their own right, and they helped make the game popular by spreading it on Vine.

Fans are already going crazy with the community art, as you can see below.

Above: Let it Goat fan art