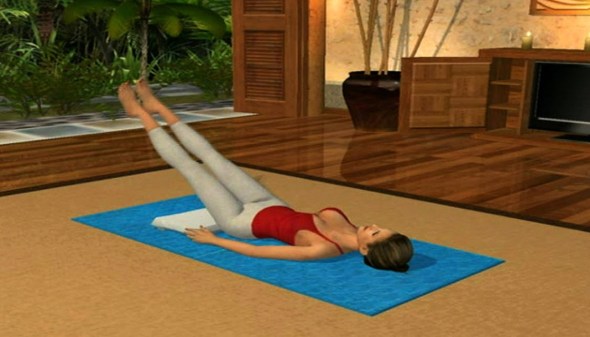 In video games, Nintendo starts the trends and then the copycats pile in. At some point, gamers get jaded and the trend collapses.

Nintendo made the exercise-gaming trend into a phenomenon with Wii Fit, which has sold more than 10 million copies since its launch a year ago. That’s more copies than the original Halo. Now other companies are piling into the exercise game craze as couch potatoes get off the couch. Sega announced Daisy Fuentes Pilates today as one of its new titles for the Nintendo Wii this summer.

Electronic Arts is also about to launch its EA Sports Active title, an elaborate exercise training program for the Wii. Sega is also creating a new winter Olympics title based on its Mario & Sonic at the Olympics franchise. Those are just a few of many exercise titles in the works.

Is it too much of a good thing? Is it possible that a hundred different exercise games could succeed? You never know which games those 50 million Wii fans are going to buy. It’s not clear how many of those Wii fans are pilates devotees, but the Wii has appealed to a broader demographic than typical game consoles.

Thanks in no small part to the continuing popularity of Wii Fit, the overall exercise game trend continues to gather steam, said Ben Sawyer, who runs the Games for Health Project.

“When you get Electronic Arts betting their sports brand on exercise games, that’s significant,” he said.

A fifth annual Games for Health conference will be held in Boston on June 11 and 12th. It is expected to draw 250 people to 55 different sessions. Exercise games is one of the five topics at the conference, which also addresses brain-training games such as Nintendo’s Brain Age and other therapeutic games. If the video game companies can keep offering something new to users that helps them enjoy themselves while getting some exercise, there is no reason a trend this big should run out of steam.

With the Daisy Fuentes title, you can get a private Pilates class in your own living room. It uses the Wii Balance Board (introduced with Wii Fit) and gives real-time feedback to improve the position and moves of the player. The workout can be customized to level of experience, and players can play in Spanish or English. The game is coming out this summer and is being developed by Collision Studios in Los Angeles for Sega.