Uncharted 4 is incredible. But is it the best in the series? Specifically, is it better than Uncharted 2: Among Thieves?

That’s what I’ve been asking myself since beating Nathan Drake’s latest adventure. It’s the PlayStation 4’s biggest exclusive yet, and it serves as the conclusion to a franchise that has sold over 21 million games. I love this series, and the latest installment filled me with wonder and glee. However, 2009’s Uncharted 2 is one of the greatest sequels of all time. It takes the ideas and characters from the original and refines them into an incredible, beautiful adventure.

But now that I’ve played Uncharted 4, I’m wondering if Among Thieves still holds onto to its top spot in the franchise. Each has its own advantages going into this fight. Uncharted 2 is now a beloved classic, while Uncharted 4 is shiny and new. But I refuse to cop-out with some sort “oh, golly gee, they’re both good I guess” result. At the end of this story, I will pick a winner.

I also want to note that, unlike my spoiler-free review, I’ll be talking a bit about Uncharted 4’s story here.

Above: Uncharted 2 was one of the greatest-looking games ever in 2009.

You might think this comparison is unfair. Uncharted 4 is, after all, seven years newer than Uncharted 2. Of course it looks better. But I’m trying to think ahead here. When we’re playing both of these games 10 years from now, people won’t care about excuses. They’ll just notice that one game looks prettier.

Uncharted 2 has aged well, especially if you’re playing the recent remaster. And at its time, it was one of the greatest-looking games ever seen. We can say the same thing about Uncharted 4 right now. It just has the benefit of the latest graphics tech in console games. Above: Uncharted 4 has a lot more slow moments than its predecessors.

The shooting and pacing

This one comes down a bit more to personal preference. Basically, it depends on how much you like shooting things, because Among Thieves has a lot more gunplay. At its core, it’s a third-person shooter. The last one-third emphasizes this, pitting players against hordes of enemies in unavoidable battles.

Uncharted 4 deals more in stealth. You can more easily avoid fights or run away from them. A Thief’s End has fewer mandatory battles. It also avoids a trope that the other Uncharted games followed; the final act doesn’t unleash a new type of enemy (always some sort of group of mystical beings that take a ton of shots to kill) right before the end.

Now, for a pure shooter, adding a new kind of enemy can add excitement. However, it also becomes annoying when those new bad guys are difficult to kill and take a million shots to die, especially when you really just want to race to the end of the story.

I’m torn on this. Some people criticize Uncharted’s shooting mechanics, but I’ve enjoyed them. I love jumping in and out cover, shooting blindly at foes while rolling out of the way of enemy grenades. But now that I played Uncharted 4, focusing less on gunplay makes more sense for a Nathan Drake adventure. You spend more time with other aspects of adventuring, like puzzle-solving and exploring. I’m not trying to knock Uncharted 2 for having a lot of gunplay. I like shooters. However, a lot of games are about shooting people. Uncharted 4’s approach feels fresher.

Besides, Uncharted 4 still has gunplay. Heck, mechanically, the shooting actually feels better than it does in Uncharted 2, and its larger environments make battles more fun than the narrow fights in Uncharted 2. But, besides that, I appreciate how it makes Drake’s adventure about more than headshots and explosions. This is a point for A Thief’s End. 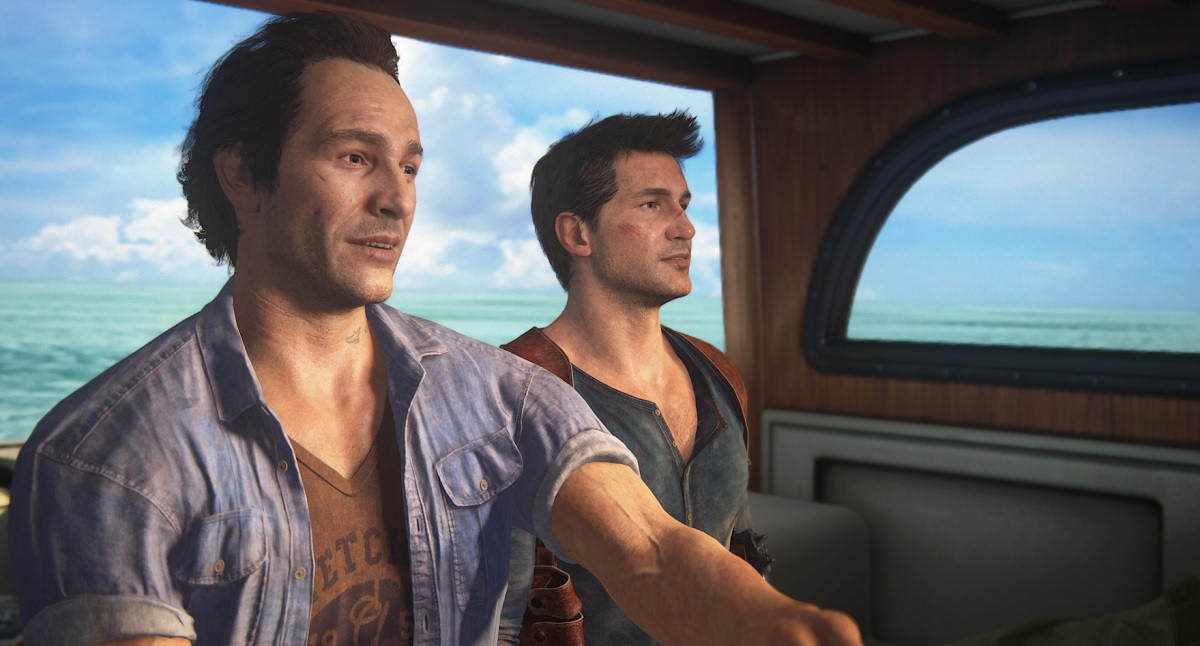 Uncharted 2 doesn’t have much of a story. It follows the structure of other adventure narratives. It’s more about a sequence of exciting events and less about a character’s feelings, relationships, or growths. Like Indiana Jones, it’s goal-oriented. Uncharted 2 is Nathan Drake trying to find a lost city.

Uncharted 4 has more going on. The introduction of Sam, Nate’s lost brother, gives this story more depth. A Thief’s End is less about finding a treasure and more about Nate’s relationship with Sam and his wife, Elena. It’s a story about an aging thief trying to move forward with his life right when a part of his past sucks him back into the dangerous world of treasure-hunting. It’s an emotional tale that has more going on than “clue leads to clue leads to clue leads to treasure.” 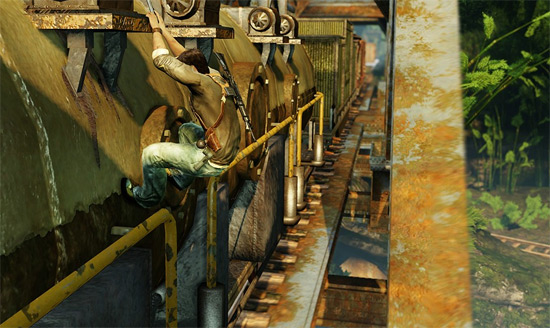 Above: Best level ever.

The train level. God damn, that train level. It was Uncharted 2’s best moment. Drake fought his way through and on top of a speeding locomotive as it steamed its ways past beautiful landscapes. The scale of it was ridiculous for its time, but it’s even crazier that nothing has surpassed it. Even Uncharted 4 doesn’t have a level that’s as good.

An Uncharted 4 scene where Nate and Sully escape a city on a truck comes close to the train level. Sadly, the impact of that set piece is lower because Sony showed the entire thing during its E3 press conference last year. So, even though I was playing it for the first time, it felt like a rerun.

Uncharted 2 has other incredible moments, including a fight with a helicopter (that at one point blew up the building you were in) and a battle with a tank that chased you across an entire village. Against this, Uncharted 4 comes off as a quieter game. It has action-packed moments, but they feel familiar (collapsing bridges, falling buildings, and so on).

Yet Uncharted 4 has the better finale. I don’t hate Uncharted 2’s final boss, as others do, even if it’s a mediocre battle in a game that’s anything but generic. A Thief’s End has a climax that’s more cinematic and does a better job serving the story. 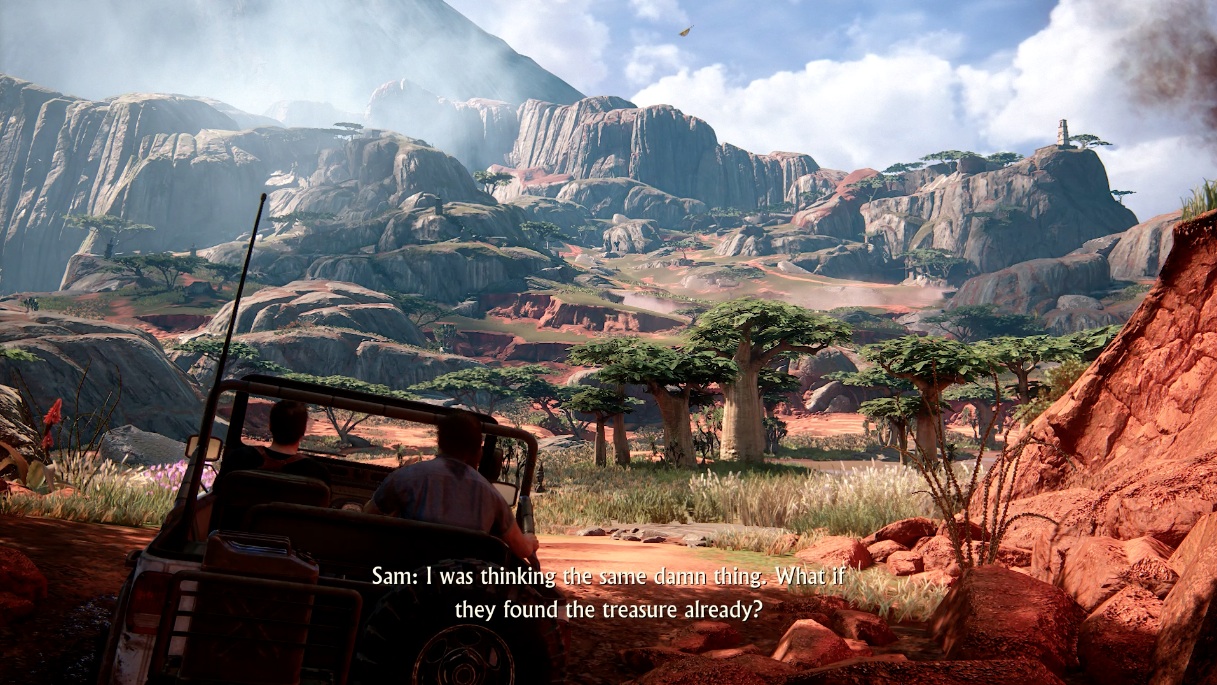 Above: Uncharted 4 is one of the best ever.

Uncharted 2’s emphasis on shooting and big set pieces make it an easier experience to replay than Uncharted 4. Gunfights can play out in a bunch of different ways, unlike puzzles and climbing sections. Uncharted 4 is the prettier game, and it tells the better story. It’s emphasis on the parts of adventuring outside of shooting make it feel unique. Right now, it’s the better game.

Time might change my mind. Years from now, when Uncharted 4’s shine wears off, comparing the two might give a different result. But right now, Uncharted 4 ropes its way to the top.