Overwolf has raised $5.3 million in funding to design a platform where users can create their own add-on mods and utilities for games. The new investment reflects the company’s wider ambitions to provide an add-on platform to modify games.

The investment shows that user-generated content and platforms targeting hardcore gamers are still a hot category within the larger game industry.

Existing angel investors participated in the round. Overwolf is also adding an investor and adviser in Bruce Hack, the former vice chairman of Activision and ex-chief executive officer of Vivendi Games. Roy Bahat, the former president of IGN and chairman of Ouya, has also joined the company’s advisory board.

Overwolf has expanded its platform beyond its initial focus of socializing games. It embedded social media and achievements into hardcore games. Now it is expanding to become “a complete add-on platform for games.” It is sort of like the add-on plug-in platform for Google’s Chrome browser or Firefox extensions.

“Our open SDK [software development kit] lets us or players or developers to create apps that will become available in any game Overwolf supports,” said Uri Marchand, the CEO of Overwolf, in an interview with GamesBeat.

The SDK is in closed beta testing. But users have already created add-ons that include video capture, music player, clock, browser, voice-over-Internet-protocol services support, and other things that are generic add-ons. On top of that, players are creating game-specific add-ons such as an app that lets you target a mortar more easily in Battlefield 2. Players have also created timers for Guild Wars 2.

“Most of these are created by the gamers,” Marchand said. “We think that no game should be played without Overwolf. Gamers are very passionate about the value proposition.” 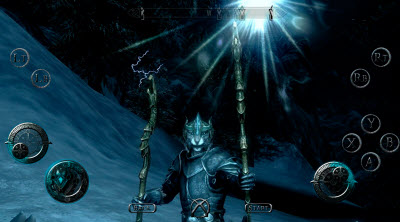 Above: Touch-screen version of Skyrim

The company isn’t yet focused on a business model. It is trying to get the platform right and attract more game add-on creators. In the future, Marchand said there could be premium services and apps.

One of the more interesting apps can create touch-screen capability for games such as Skyrim (see video below and picture) that were designed for the PC with a mouse and keyboard. That feature could be a premium app.

“We can make Skyrim playable on a tablet,” Marchand said.

Overwolf will likely work with game publishers and provide analytics tools for them. The platform will likely launch for the public in an open beta test in early 2014. Tens of mods have been submitted, and 15 have been approved so far in the closed beta test, which has been in place for about a year.

The overlay adds the ability to access Facebook, Twitter, Skype, MSN, web browsers, and gameplay recording — all without requiring the user to exit the game he or she is playing. Publishers can add the functionality Overwolf without touching a line of code in their games.

Other rivals include Xfire, Valve’s Steam, PlayXpert, and Raptr. Overwolf believes it has created a better experience and feature set for users.