AR/VR has become a two speed market, with mobile AR set to have over twice the number of users at launch in 2017 than the entire AR/VR headset market by 2021. Apple ARKit, Google ARCore, and Facebook’s Camera Effects Platform could have 900 million users by the end of 2018, with their launch changing the trajectory of the whole market. Digi-Capital has fundamentally revised the AR/VR market thesis, analysis and forecasts in its Augmented/Virtual Reality Report, Augmented Reality Report and Virtual Reality Report:

The combined impact is a significant upgrade for AR and a material downgrade for VR. This completely replaces all previous forecasts. 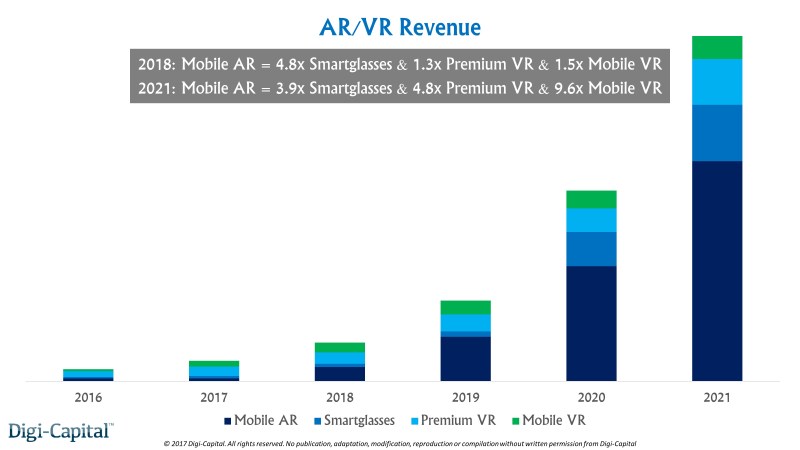 Where mobile AR dominates AR/VR installed base, it could account for only two-thirds of total market revenue by 2021. Mobile AR software’s economics are similar to the broader mobile market, where vast user bases with relatively low ARPU (average revenue per user) can deliver high growth and profitability. Smartglasses, premium VR and (to a lesser extent) mobile VR benefit from significantly higher ARPU due to hardware sales, but much smaller installed bases limit their non-hardware revenue potential. Mobile AR revenue could be 4.8 times that of smartglasses, 1.3 times premium VR and 1.5 times mobile VR revenue in 2018, growing to 3.9 times smartglasses, 4.8 times premium VR and 9.6 times mobile VR revenue by 2021. 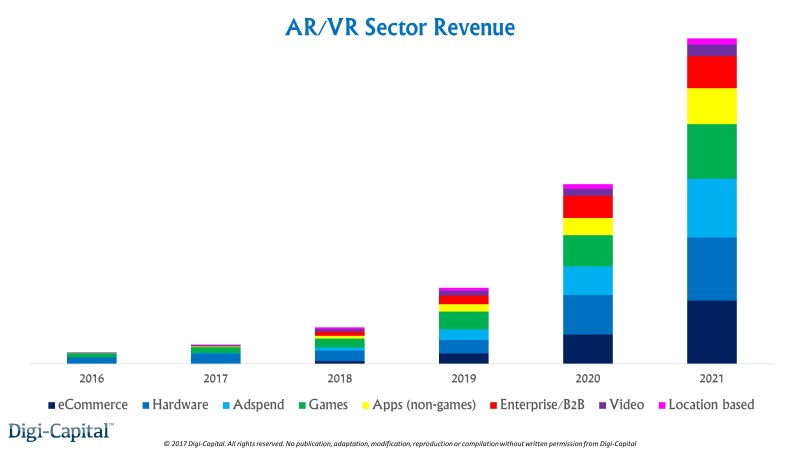 eCommerce could be the largest revenue stream across AR/VR by 2021 due to the scale of mobile AR’s installed base and increased conversion rates. Houzz has already delivered 11 times sales conversion using mobile AR, so mobile AR eCommerce could further consolidate Amazon, eBay and Alibaba’s dominant positions. Hardware sales (particularly consumer smartglasses and second-generation standalone premium VR headsets when they get here) are a close second, followed by adspend, games and non-games app revenues. Enterprise/B2B revenue will be driven primarily by AR, with video and location based (theme park) revenues at a much lower level.

(Note: Telco data/voice revenues have been removed, as ARKit/ARCore’s ubiquity on standard smartphones/tablets has taken away telcos’ ability to implement premium mobile AR related pricing. Similarly, mobile AR hardware revenue has been excluded with Tango’s retirement and the iPhone X not including a rear-facing depth sensor.) 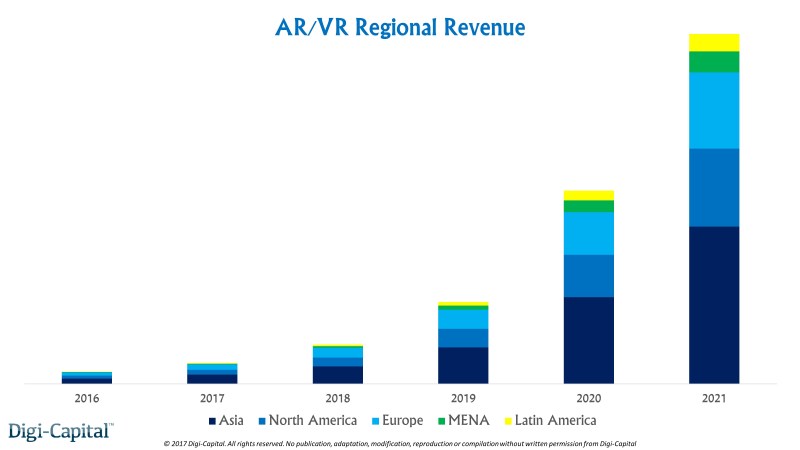 The future’s so bright, I gotta wear (augmented) shades

Because of consumer smartglasses five consumer challenges (hero device, all-day battery life, cellular connectivity, app ecosystem, telco cross-subsidization), predominantly enterprise focused smartglasses sales could remain in the hundreds of thousands of units through 2019. Our long-held view since 2015 of Apple as the catalyst for AR proved to be correct this year. So its potential launch of mobile tethered smartglasses as an iPhone peripheral could be the catalyst for the consumer smartglasses market in the 2020 timeframe (followed by Samsung and other major phone makers).

Time to fire up that iPhone X and look into the future.