It’s about time! That’s the subtitle to Plants vs. Zombies 2, the sequel to the wildly popular 2009 tower-defense strategy title from PopCap Games. That’s also the way I feel about the timing of this long-awaited game, which is due out for the public very soon.

Now part of Electronic Arts, PopCap has been toiling on this title (on and off, for almost four years) to deliver something both familiar and fresh to millions of fans of the first game. Now the second game’s release is imminent, and we’ve played through many hours of the iOS game (for iPhone and iPad). The game bears a lot of resemblance to the first title that came out in 2009. So I wonder why it took so long. But it is also very well-tested and balanced, and that makes me understand the craftsmanship at PopCap and why it took so long to get this title right. [Update: The game launched today, Thursday Aug. 15, on iOS].

PopCap never hurries. Even under the ownership of EA, it waltzes toward its game releases, like a slow-moving zombie who wants to eat your lovably misspelled “brainz.” All three of my kids were obsessed with the first game, but they’ve grown much older as they waited for the new version to arrive. It’s rare for a game to have such universal appeal, at least in my household. The fundamental breakthrough in this game, in my opinion, was that it was a slow-moving title where you could sit and think about what you needed to do until the horde arrived and became unmanageable. That’s what made it stand out in the overcrowded zombie game genre.

The verdict on the new game? Fans are going to love it. It does just about everything it needs to capture a large market of players. It has cute zombies and pretty flowers. It’s got a silly story and a sense of humor. And it has hardcore, sometimes extremely challenging levels that seem simple but are very difficult to master. To make it through three large worlds in this time travel game, you’ll have to spend hours replaying levels lots of times. The painstaking attention to the gameplay details shows. If the level designers tweak just one parameter in the game, what was once a simple level can become very hard to survive. And if you don’t survive, the zombies will devour your brainz and you’ll have to start all over again.

The good thing is that the vast majority of the game is free-to-play, where you can play for free but purchase virtual currency with real money, and the game doesn’t force you to spend money. You’ll get your money’s worth in this game, and for PopCap and EA’s sakes, you probably won’t mind spending money once in a while to make more progress in the game or get ahead of your friends. In this sense, Plants vs. Zombies 2 is a rare, thoughtful sequel. 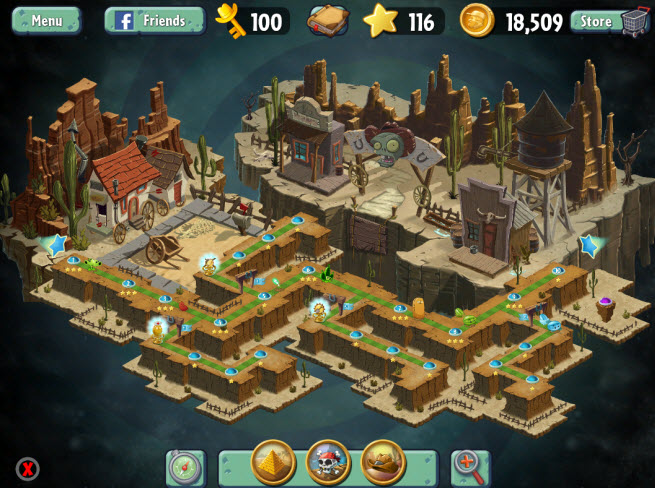 Few games are as addictive as the original Plants vs. Zombies, which debuted on the PC in 2009. The first game was so successful that PopCap spent about two years porting the title to just about every platform where games appear. Then it began working on the second version and worked hard to get the balance right in every level, according to senior producer Allen Murray.

Plants vs. Zombies 2 is still a twist on the classic tower defense strategy genre, where you have to set up a fortress and manage your resources efficiently. Zombies walk across a segmented board, which can be your lawn or the deck of a pirate ship. They try to get to the other side so they can break into your abode and eat your brainz. You use a bunch of plants to defend yourself. The zombies start out painfully slow at first. You plant sunflowers which produce little suns. You tap on the suns in order to stock up on them. And then you spend the suns to purchase new kinds of plants. The variety of plants in mind-boggling and creative, but you don’t have to think too hard about which ones you’ll use. Every zombie has a counter in a plant, in a rock-paper-scissors fashion. You’re limited to choosing from among six or so plants in each round.

Zombies may attack down six lanes. But if you dawdle in setting up your defenses, or you spend too many suns on the wrong kind of plant, they may surprise you. If just one of them gets to the other side, that may ruin your victory conditions and you’ll have to begin again. At some point, the zombies will amass in overwhelming numbers. If you haven’t spent your suns wisely in amassing a lot of firepower to counter the zombies, then you’ll lose your brainz.

The basic mechanics are the same, but the changes come in the character types. The new plants include a Boomerang Flower, Bonkchoy (which can punch in two directions), and Peapod and Snapdragon are all new plant defenses. But there are also new kinds of zombies, including the Pharoh Zombie, Mummy Zombie, Pirate Captain Zombie, and Cowboy Zombie. Each one of those zombies is aimed at crushing your defenses in surprising ways.

Players will appreciate the variety of the zombies in this new game that represent multiple types of threats. Some can swing over barriers such as water. Others can fly over your plants, attacking you in middle of the board. Still others can roll TNT barrels that block your main Pea Shooter plants. At each point along the way, you have to decide whether to spend your valuable suns on short-term stop gaps, such as a walnut that gets in the zombies’ way for a while until they eat it, or long-term, expensive weapons such as a cannon. You’re constantly making trade-offs in the game, and your choices really matter.

In the Pirate Seas world, you defend your ship from zombies trying to board it via a plank. You can close off the lanes where there are planks. But the Captain Zombie can leap over the gap between the two ships and swing on over to your ship. That gives you very little time to react. You can counter the captain with a Walnut or a Freeze plant. And that makes it all feel like a very competitive chess game.

The sequel has a larger campaign this time and a meta-campaign where you have to make your way through the levels but also pursue side quests. You’ll have to earn Stars by playing the same levels over and over and hitting the target performance level. Once you accumulate enough Stars, you can advance. The three worlds are Ancient Egypt, Pirate Seas, and The Wild West. PvZ2 is designed in a modular fashion, so PopCap can release additional levels as well as additional meta worlds in the future. That gives players who just can’t get enough a path to continuously engage with the game.

PopCap trains you to be a meticulous player, and that should result in higher engagement. You’ll come back to this game, and replay levels, over and over, because it is designed that way. You can speed through the levels in the first world or two and move on. But to get to the third world, you’re going to have to play through levels over and over.

If you add up all of the levels, it has more than 60. At the end of each world, you can play in a “challenge zone” that offers you never-ending gameplay, if you wish. That’s a huge amount of content for a free-to-play game.

When you kill a glowing zombie, you’ll earn a new kind of power-up dubbed Plant Food. You can use these to temporarily boost the firepower of a plant or to instantly produce 150 sun points. The firepower is usually enough to eliminate the threat of a zombie attack in a given row, or it could be used on your mortar-like corn plants to lob sticks of butter at every zombie on the map, slowing them all down. Your Pea Shooters can suddenly become Gatling guns, mowing down zombies and giving you great satisfaction.

You can only have three or four of these Plant Food boosters at any given time, and the glowing zombies don’t arrive too often. So you have to hoard them as if they were precious and use them only when emergency dictates it. This gives the defense a significant boost, and that allows PopCap to ratchet up the number of zombie waves attacking to a much higher level than in past games. While Plant Food helps you out enormously, it also increases the intensity and tension.

Another big change is its focus on touchscreens. If you earn enough gold coins, you can purchase more temporary power-ups that can save your bacon in the height the zombies attacks. You can use your coins to buy special abilities that you can execute with simple touch gestures. Eight hundred coins buys you the ability to pinch the off the heads of zombies with your finger and your thumb. You can spend 1,000 coins to send a bolt of lightning through the zombies, electrocuting them. With 1,200 coins, you can pick up a zombie and flick it off the game board. Each one of these attacks is available for 10 seconds or so. That’s enough time to launch a devastating attack on most of the zombies on your game board. Such attacks come in handy when you really need some “divine intervention” in the face of the zombie assault.

The first game had a story-based campaign and a never-ending challenge survival mode. You still have those options, but the variations on a theme within each level are important. Sometimes you’ll be called upon to defend your plants without losing any flowers at all. Sometimes you have to defend a plant, such as a Spring Bean (which can bounce pirate zombies off the ship into the water) at a given location at all costs. These different victory conditions cause you to change your tactics and the line-up of plant defenses. You don’t really get the sense that you’re traveling through time. 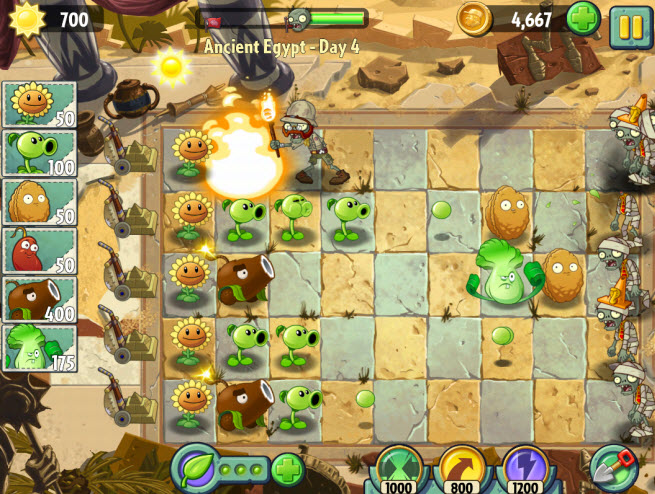