Too small to be set free

Even with the bigger of the two Apple Watch screen sizes (the device comes in 38mm and 42mm sizes), screen real estate is at a premium for both gaming and monetization. Game makers tied to more prevalent models of monetization such as ad-supported free games will have to rely on the smartphone’s screen for advertisements. As of now, iAd is not supported on the Apple Watch.

For now, outside the clever use of in-app purchases, Apple Watch games will need premium pricing to make money. For example, a launch game by Playscreen, Blackjack Anywhere, is $2, with no in-app purchases or time limits attached. It’s just like the old days.

EEDAR analyst Patrick Walker says there isn’t enough screen real estate for effective banner advertisements on the watch, though it could work with short interstitial advertisements. Until watch monetization is figured out, watch games will have to be sold at a set price unless they use the phone screen.

“There will be a challenge in monetizing games that are designed based on the paradigms and learnings from previous platforms, which depend on a larger screen to engage players and deliver advertisements,” Walker said. “Monetization will need to be figured out after game developers learn what consumer gaming experience truly fits with a wearable platform. Initially, many games on the platform will be premium because of the challenge of implementing an IAP or ad-based revenue model onto a device with such a small screen.”

Digi-Capital Managing Director Tim Merel says that there is potential for both paid and free apps for Apple Watch, though the small screen will require new approaches to advertising. It could be that native advertising could become even more important than it is today. Merel also notes that the potential for an increase of sessions per day for games could be an interesting opportunity for game makers.

“Digi-Capital’s analysis shows that sessions per day are critical for mobile games, with up to 35 times difference on that factor between top 1 percent and top 5 percent grossing apps,” Merel told GamesBeat. “As Apple Watch is intended to be used even more frequently than iPhones during the course of the day, that offers an intriguing opportunity for developers. Taking advantage of that opportunity might require new approaches because of the small form factor.” 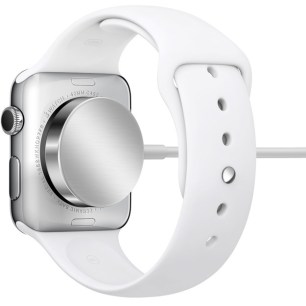 Above: Apple Watch will need a nightly charge with its 18-hour battery life.

Don’t worry about the battery

Apple quotes an 18-hour battery life for the wearable, and that’s when it’s paired with an iPhone and checked regularly throughout the day. That number only figures in 45 minutes of app use. It’s hard to know if games will have more or less of an impact. Users and experts are concerned that the battery life may be the Watch’s greatest weakness.

Despite these other concerns, it seems that developers of Apple Watch games aren’t worried about its battery life. Eyes Wide Games tells GamesBeat that it is “confident that battery life won’t be a problem.”

Robot 5’s Peter Chen says that if gameplay matches that of apps — 15 seconds or less at a time — the battery situation should be fine.

“We can expect that Apple Watch users will use their apps for about 15 seconds or less at a time,” Chen said. “Holding up your arm and wrist for minutes at a time simply doesn’t make sense. Usage for games will be no different.”

Connectivity is also a concern for battery life. With WatchKit games and applications using an invisible wireless link to send data between the Watch and iPhone, another layer of continual drain is added on the already limited battery capacity. But with the iPhone doing the heavy lifting in terms of processing, the Watch should be fine, says Chen.

Apple’s announcement of its Watch focused solely on applications for fitness and health, with no mention of games. IHS Technology analyst Jack Kent says that Watch’s small screen will limit interactivity and that developers are going to have to be really creative to put games on it.

“Since the days of feature phones and into smartphones and tablets, games have been the dominant mobile media category – and device makers including Apple have often turned to games developers to show of new hardware features. It is different with smartwatches,” says Kent. “At launch, most app development is focused on health and fitness services, communications, and notifications. There is a role for games on smartwatches, but is likely to be limited to niche location-based titles and very casual games. Games won’t be the main selling point for smartwatches.”

Digi-Capital’s Merel notes that while the install base could be large, it will always be a subset of the iPhone install base. For this reason alone, the Apple Watch won’t supplant mobile devices for gaming. 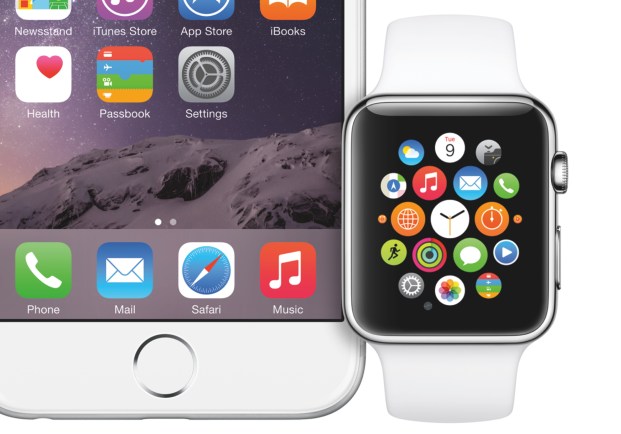 Above: Apple Watch and iPhone 6

Even in the shadow of the iPhone, it could be that convenience is what has the Apple Watch gaining favor with gamers. Many developers GamesBeat spoke with felt that the wearable could increase retention and engagement — two elements that challenge mobile developers — through ease of access.

“There are countless instances throughout the day where a quick distraction would be fun but too inconvenient, like going home on a crowded subway or waiting for a meeting at work to start. We can imagine someone playing Blackjack Mini 10 times a day for 10 seconds at a time, and potentially playing a different, more immersive iPhone game once at night on the couch for 10 minutes,” Robot 5’s Chen says.

Eyes Wide Games’ Griffin thinks that the Apple Watch could one day be as big as smartphone gaming is today. It needs good experiences to do so.

“As long as the games are good, gaming on the Apple Watch will revolutionize gaming for everyone who has the Apple Watch. They will play much less, if at all, on their phone,” he said. “Just like casual gaming moved from the desktop to the mobile phone, casual gaming will once again move to where users spend their time.”