Microsoft said that it has finally launched its Xbox One video game console in China. That’s a first for Microsoft, since China’s console ban has been in effect for the entire time that Microsoft has been selling Xbox machines.

The launch with Chinese partner BesTV was supposed to happen last week, but Microsoft delayed the official sales until today. The delay was no surprise, given how many things can go wrong with a console launch. Microsoft said it has launched the Xbox One, which debuted in the U.S. in the fall of last year, is now on sale in 4,000 retail locations across 37 cities in China.

That’s a pretty good spread, but it’s worth noting there are a 160 cities in China with more than 1 million people.

Last week, Microsoft went forward with a party for gamers in Shanghai at the Oriental Pearl Tower, even though it delayed the official launch by a week.

Microsoft previously said those in China who preordered will still be the first to receive the Chinese version of the console, and they will also get an unspecified added bonus. The company still says it is working with 25 leading developers to deliver 70 games for Xbox One fans in China.

“I think the Xbox one launch in China is a milestone event,” said analyst Brian Blau at market researcher Gartner. “It represents the opening of a new type of market for the Chinese consumer, and if others followed suit this could be the start of a new gaming revolution in China.”

He added, “Despite this being a momentous day, I am not as enthusiastic about sales and overall perception of Xbox one in China in the short term. This is mainly because the Xbox does not have a big game lineup yet, it’s an expensive device relative to incomes, and that Chinese gamers are mainly PC game players and mobile game players, so there will need to be a real shift in consumer behavior before these types of devices will gain traction.”

Lisa Cosmas Hanson, managing partner of market researcher Niko Partners, said, “The Xbox One hardware launch is important and symbolic, but the true test for demand will arise when more [high-quality] games are approved for use on Xbox One in China. So far there are 10 titles, gamers are waiting for the big ones to get approved.”

The available games include:

o Max: The Curse of Brotherhood 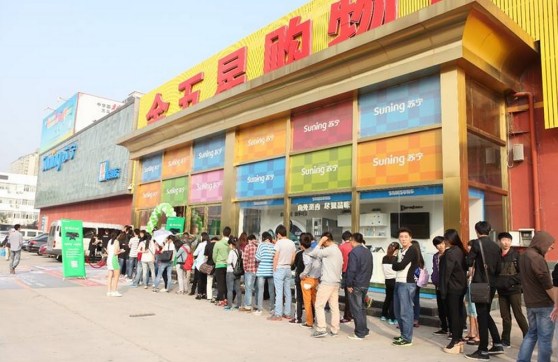 Above: The line to buy the Xbox One at a store in China.