Jam City announced that Cookie Jam has passed 100 million mobile downloads, and the company is launching Cooking Jam Blast as a new match-3 game in the series. It’s kind of like jam on top of a peanut butter sandwich.

Cookie Jame is flagship game for Jam City, and it is one of a handful of hits that has enabled the company to grow to more than 500 people.

“Cookie Jam Blast builds on what Cookie Jam is,” said Josh Yguado, president and chief operating officer of Jam City, in an interview with GamesBeat. “It has lots of different mechanics, with graphics in 3D. It’s set in the same universe.”

The new iOS and Android game has a lot of different game modes and so many changes that it made sense to do a new game, rather than modify the existing Cookie Jam title that has been a fan favorite since 2013. 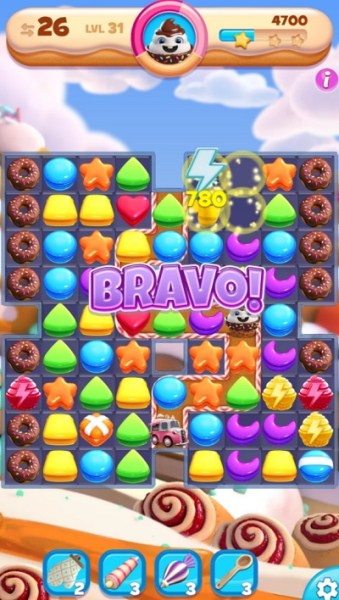 Above: Cookie Jam Blast has 3D effects and new destinations.

“Cookie Jam has been Jam City’s most successful game to-date and the first game we have extended into a franchise brand,” said Chris DeWolfe, Co-Founder and CEO of Jam City, in a statement. “We believe the Cookie Jam franchise is both an iconic brand and has the potential to be a multibillion dollar business for Jam City. We could not be more excited about the future of Cookie Jam and Cookie Jam Blast.”

In Cookie Jam Blast, fans will follow Chef Panda’s quest to become the best pâtissier in the world. Aboard the Bakery Airship, players will visit new worlds like Sherbert Forest and Berry Fundae Island and encounter new charming characters like the Gingy, Scoops, and the Yummy worms. Players earn ingredients to craft treats for their customers and level up. For the first time, friends can also send each other Bee-a-Buddy booster charges to help get through levels faster.

“If there were no constraints at all, what would you design?” said Yguado. “That’s what we put in front of our designers. It’s a recognizable intellectual property, the same world, taken to a new place. We think they delivered brilliantly.”

On top of the 100 million downloads, Cookie Jam has 5 million daily active users worldwide. Cookie Jam also has earned Facebook’s Game of the Year and is continually listed among the top 20 grossing games globally.

DeWolfe said earlier the Los Angeles company reaped more than $300 million in revenue in 2016, and that growth is targeted at $450 million in 2017. To date, the company’s games — Cookie Jam, Panda Pop, Family Guy: The Quest for Stuff and Marvel Avengers Academy — have been downloaded more than 800 million times. In 2016, Jam City acquired TinyCo. As a result, it could launch a half-dozen games this year.

With so much success, it makes sense to leave the Cookie Jam title alone and do something new.

“Any type of change in an existing game, even if it is great change, can make players uneasy,” said Yguado. “That’s why it makes sense to do a new title.”