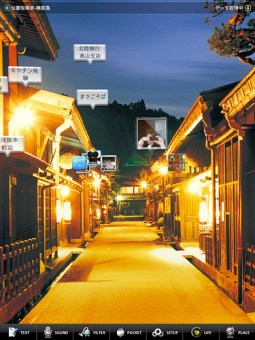 Augmented reality refers to the use of computer-generated imagery over a live feed of a real-world environment — something usually achieved with a cellphone camera.

According to Osuke Honda from VC fund DCM, a previous investor, the investment will be used to build a bigger, more diverse team and reach out to an international audience — as well as extending the company’s SoLAR gaming platform.

Social gaming is already a multi-billion dollar market in Japan. Leading mobile games portal DeNA, for example, expects to report $576 million in revenue in the six month period from April through September of this  year and is on track to generate over a billion dollars this year. Japan’s other social gaming giant Gree already has 20 million users and an extremely high ARPU. Zynga recently launched a joint venture in Japan with SoftBank.

In July this year Tonchidot launched a social, AR gaming platform for developers called SoLAR which combines location, augmented reality and social play features. Tools to integrate Twitter, Facebook, and payment features for iPhone and Android will be provided in the upcoming October product release.

Tonchidot’s flagship product, an AR app called Sekai Camera, has been downloaded 1 million times and is installed on an estimated 30 percent of all iPhones in Japan. Sekai Camera is available for iPhone in 90 countries and for Android in more than 20 countries. A lightweight version for feature phones just launched.