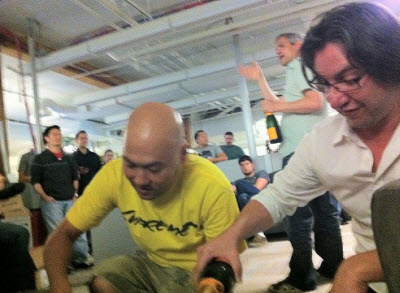 Japan’s DeNA said today it is buying Ngmoco for up to $400 million in cash and stock in the biggest iPhone-related acquisition to date.

The deal will create a powerhouse in mobile social gaming, as DeNA is big in Japan, and San Francisco-based Ngmoco has a big position in iPhone games in the U.S. It’s a big payday for Ngmoco, which was founded in the spring of 2008 by former Electronic Arts executive Neil Young (pictured standing with a bottle of champagne).

Ngmoco’s shareholders will receive $300 million in cash and securities, plus up to $100 million more if it hits performance targets through Dec. 31, 2011.

“In Ngmoco and its team we see a lot of the same talent and dynamic traction that we have in the Japanese market, making the merger a perfect fit for us,” said Tomoko Namba, founder and chief executive  of DeNA. “This acquisition cements DeNA’s leadership position in the U.S. We’re building the largest mobile social gaming platform in the world and populating it with incredible games and services.”

The deal sets up a big clash in social games. DeNA clearly has its sites set on dominating the social game market by attacking it from mobile, while social game maker Zynga has the same aim through its dominance in Facebook games. While mobile has gotten off to a slower start in the U.S. than Facebook, the situation is reversed in Japan, where DeNA is on a billion-dollar revenue run rate because of strong growth of Japan’s mobile social game portals such as DeNA’s Mobage-town.

In the U.S., the market is smaller, but Ngmoco says its games are played more than 50 million minutes a day and have been downloaded more than 60 million times. Ngmoco has had more than 20 top-ten games, and its Plus+ social game network has more than 13.5 million registered users. In September, Ngmoco said it would launch Google Android games starting in the fourth quarter.

In addition to Young, Ngmoco’s founders include Bob Stevenson, Alan Yu and Joe Keene. Young said that DeNA’s acquisition will help accelerate Ngmoco’s vision for games. In the U.S. and Europe, Ngmoco will be responsible for advancing DeNA’s “X-Device, X-Border” strategy, or its global expansion plan. Namba founded DeNA in 1999. Disney has also made its move into iPhone games with the acquisition of Tapulous, but that was reportedly for far less money.

Because of its potential in the hot iPhone market, Ngmoco was able to raise $40 million. Ngmoco’s investors include Kleiner Perkins Caufield & Byers, Norwest Venture Partners, Maples Investments and Institutional Venture Partners. Google Ventures was reportedly an investor, but that deal was never announced.

DeNA has been on its own investment and acquisition spree, buying GameView and investing in Astro Ape.