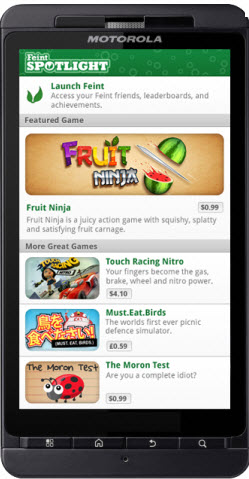 Yes, it’s time to start yelling “The Japanese are coming. The Japanese are coming.” Gree’s purchase of the Burlingame, Calif.-based startup follows the $403 million acquisition of San Francisco mobile game firm Ngmoco by Japan’s DeNA, which is a big rival of Gree’s. The deal shows that mobile is heating up, and multiple companies see the value of building a platform that helps mobile games get discovered.

Gree has more than 25 million users and a market value of $3 billion in Japan, where it operates a social mobile game platform that lets users buy games, socialize and interact with all sorts of content. OpenFeint has more than 5,000 games using its platform, and those games have more than 75 million users across iOS (iPhone, iPod Touch, and iPad) and Android devices.

Gree is going to provide OpenFeint with additional operating capital to accelerate the platform’s growth. In contrast to Ngmoco and DeNA, Gree and OpenFeint will not build a uniform gaming network for all consumers worldwide. Rather, they will create tailored products for specific markets. It plans to provide OpenFeint and Gree services on a global level.

Jason Citron, chief executive of OpenFeint, will remain as CEO. He and the OpenFeint team will have long-term incentives and grow the company into a “multibillion dollar business.” That’s consistent with the business vision of Neil Young, chief executive of Ngmoco, as stated in an interview with VentureBeat.

Gree said it understands that there is a shift in gaming expectations toward higher-quality expectations and that social is now driving gaming. That’s why the company did this deal. OpenFeint is funded by YouWeb, the incubator headed by mobile and social gaming entrepreneur Peter Relan. DeNA had a stake in OpenFeint, but it evidently sold that off or is selling it off now. OpenFeint said it hopes to double its headcount within the year, although that is easier said than done in Silicon Valley, where there is a talent shortage.

“At Gree, we are socializing the next evolution of games and, as the best-in-class US-based mobile social network, OpenFeint is the ideal partner for us to offer the best mobile social games to the largest global audience,” said Yoshikazu Tanaka, founder and CEO of Gree, in a statement.

“This acquisition further emphasizes Gree’s commitment to providing the first and best global gaming ecosystem, with both the developer and consumer in mind,” says Naoki Aoyagi, CEO of Gree International, the subsidiary that recently opened an office in San Francisco. Gree International will now be merged into OpenFeint. Gree has 24 million users on its mobile social network. Recently, Gree teamed up with feature-phone based mobile social network Mig33.

Takafumi Kawane, vice president business operations for Gree International, said in an interview that there is no point in Gree duplicating the business of OpenFeint in North America and vice versa for Gree in Japan. Gree has more than 400 employees who work on the company’s social network service and its games in Japan. Gree has seven of its own games on feature phones in Japan, and its service hosts hundreds of other games from third parties. In the fiscal year ending June 30, the company is targeting revenues of $700 million.

Citron said in an interview this evening that the move will accelerate OpenFeint’s expansion around the world. The company has offices in Silicon Valley, London and Beijing now. Developers will benefit because they can create games that run on the social platforms of OpenFeint, Gree, and Mig33 without having to rewrite them (once the companies create their joint applications programming interface). Citron thinks that OpenFeint has a multibillion dollar opportunity as smartphones and tablets will become the dominant devices of the new era.

“The economic opportunity here is so tremendous and gaming is the killer app,” Citron said. “We are at the beginning of a new age.”

Citron acknowledged that the purchase price wasn’t as big as other deals, but he said the deal was structured so that it will have a bigger payoff for OpenFeint employees down the road if they hit their milestones. He also confirmed that DeNA is no longer a part owner of OpenFeint.