You could say that Gorogoa, an artistic puzzle game mostly created by a single developer over five years, had the perfect outcome because it was “in between a success and a hit,” according to creator Jason Roberts.

It was a very unique game that made you feel like you were interacting with beautiful hand-drawn paintings. Working on his first game, Roberts taught himself game development. And he created all of the paintings and most of the game on his own, except for the sound and music.

The title came out in December on the PC, Nintendo Switch, Android, and iOS. The game turned about to be relatively short, but it was like a work of art, with a puzzling ending.

It was successful enough to encourage Roberts, who had never made a game before, to stay financially independent and to continue making video games. But it wasn’t a big enough hit to justify starting a 10-person studio. That means that Roberts will continue making games, but he won’t give up control of his artistic vision.

Many developers cross that bridge when they ride the success of a game to a bigger studio with more resources. But Roberts feels like he will collaborate with just a few developers on his next game and stay true to the awkwardness of finding his way on his own. He gave a talk about making Gorogoa at the Gamelab 2018 event in Barcelona last week, and I caught up with him for an interview. 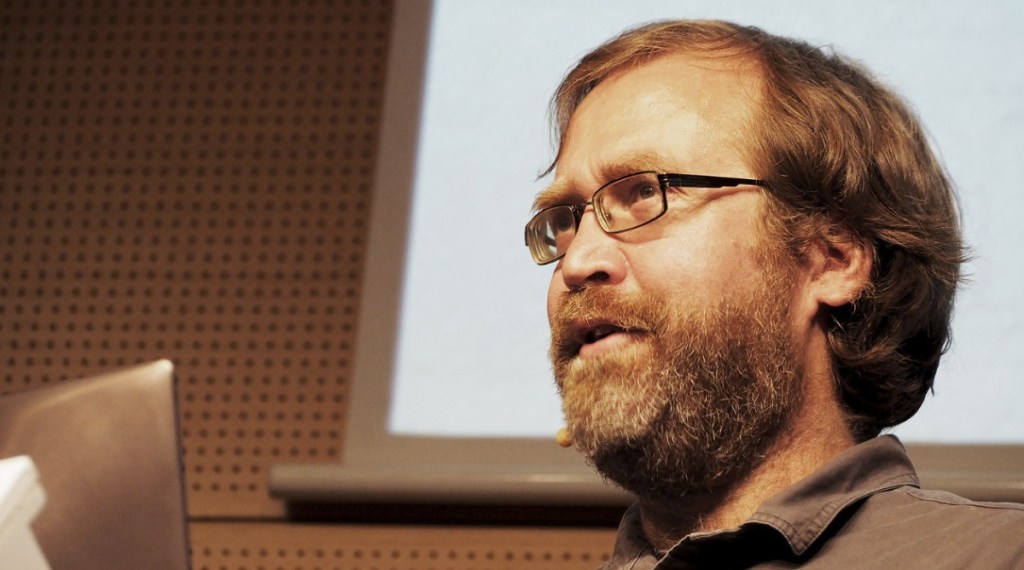 Above: Jason Roberts at Gamelab 2018.

GamesBeat: Was there a highlight in the talk you wanted to drive home for the people here?

Jason Roberts: Well, the talk was about how a lot of the decisions I made on how to approach the game early on turned out to make my life very difficult and make the design constantly challenging. Each step was a struggle, finishing the game, but that awkwardness of making the game is connected to why it’s unique and special. If you make something through an unlikely, inefficient process, it will seem more magical, naturally.

GamesBeat: You get something out of the chaos there?

Roberts: Yeah, exactly. I discussed a lot of design decisions and why they were challenging. People can take what they want from the talk. They can accept my moral or look at what I did and conclude that they should not follow in my footsteps.

GamesBeat: You had to do a lot of things by necessity. You were by yourself, right? 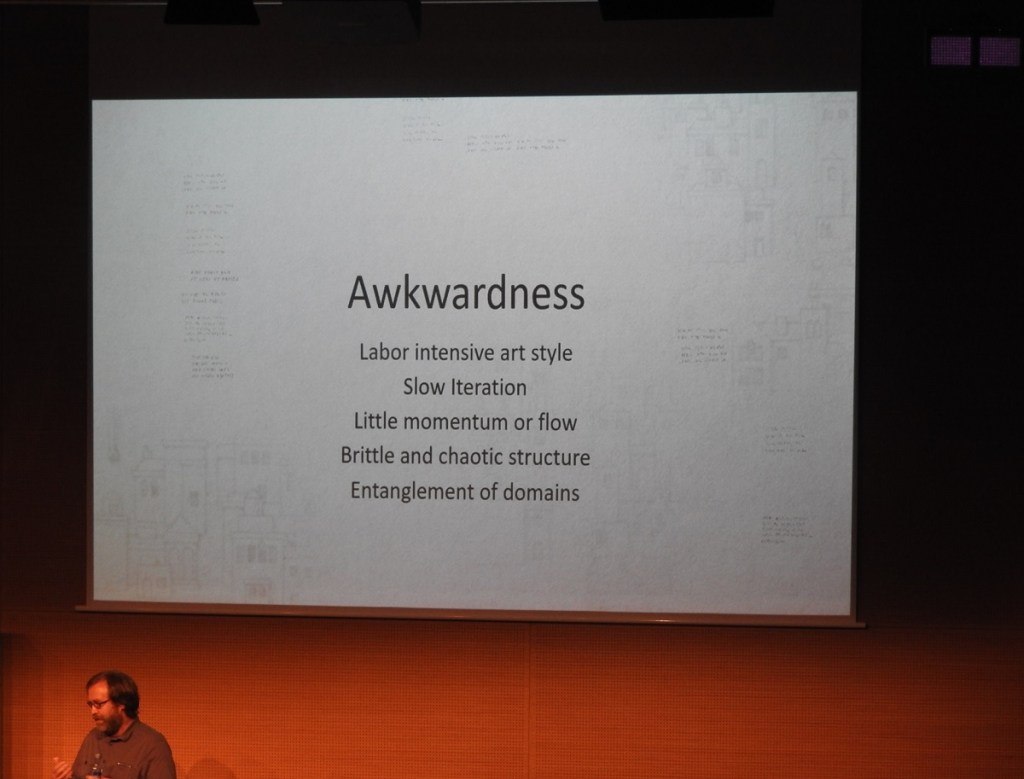 Above: Jason Roberts believes a certain amount of awkwardness is necessary to create great games.

GamesBeat: You had to teach yourself the whole process, right?

Roberts: Yeah, I did. I should have read more about design beforehand. I think I would have gone with the art style regardless, because that was such an important part of the project for me. I like drawing in pencil. That was a requirement for the project that had nothing to do with game design.

GamesBeat: The idea, the mechanic, was unique. Was that there at the beginning?

Roberts: Yeah, that’s been around for a while. I even had another game that I designed earlier that had almost the same mechanic, but a completely different story. It’s the kind of thing that appeals to me. I like imagery and I like visual tricks and illusions. This has that quality. 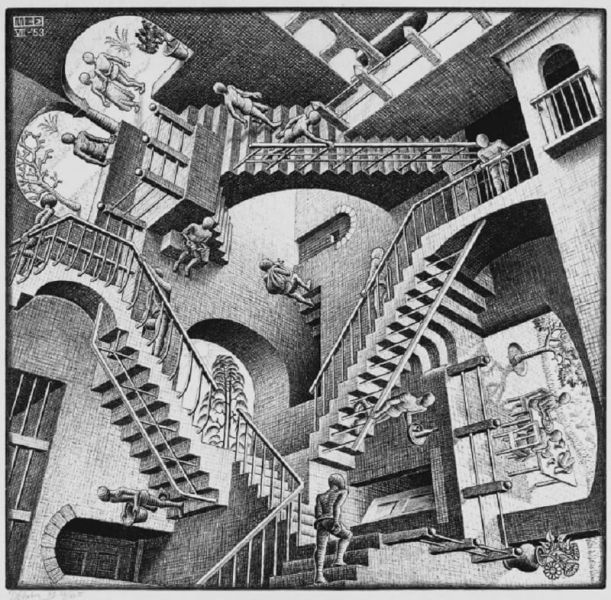 Above: Relativity by M.C. Escher

GamesBeat: Was the inspiration that M.C. Escher kind of composition?

Roberts: Every time people ask me to list inspirations, I always forget some. But Escher, yeah, definitely. Especially this artist Christopher Manson, who made these books — my favorite is called Maze, a puzzle book, where each page is a room of the maze and you have to explore the maze. You figure out the shortest path through the maze and solve a riddle.

A bunch of illustrators of antiquity. Gustav Dore and David Roberts, who traveled the world in the 19th century and did sketches and drawing. Architecture and that way of looking at ruins and mysterious structures. That informed the design.

Roberts: It’s done well. It’s in between a success and a hit, I guess? But it helps that it’s a small team. It was successful for me. If it had taken 10 full-time people to make it would not have been as successful, that’s for sure, at the same revenue level. That’s an indicator to me that it might be a good idea to stay lean and work with, at most, one or two other people, as opposed to expanding to start a studio. That’s exciting in a lot of ways, but I feel like I would be giving up my advantage. 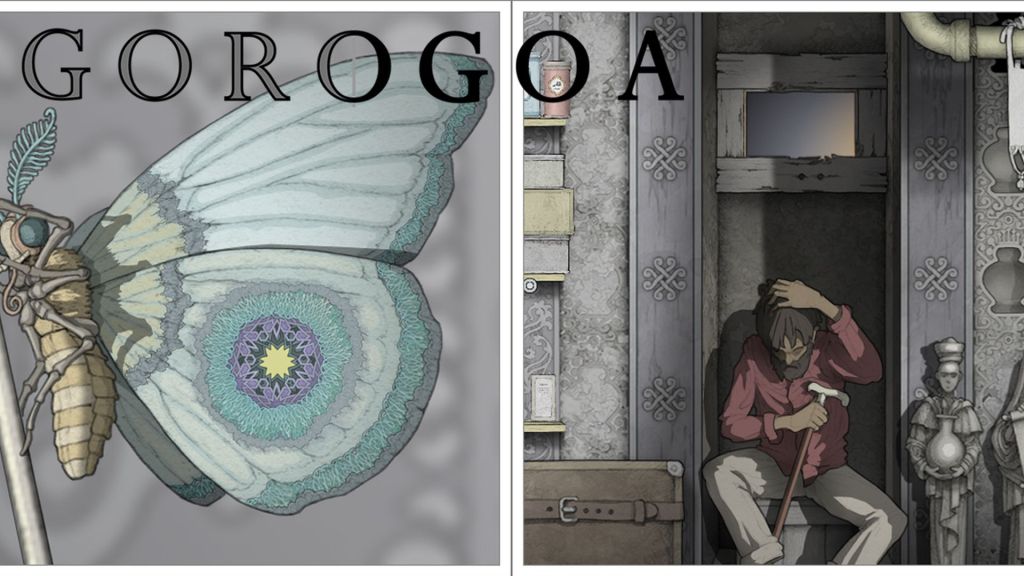 Above: Gorogoa is beautiful and unique.

GamesBeat: I don’t know if you heard Amy Hennig talk yesterday about being a creative director.

Roberts: I heard part of the fireside, yeah.

GamesBeat: She compared it to raising kids. You give them direction and hope they go the right way. As a creative director you can say, “I want the art to be like this,” but the art director and the artists create it. There’s a loss of control, even though you’re the “director” on this massive game.

Roberts: That’s certainly true on a big game, where you have to delegate. I had that experience with sound design and music, where I just let go. Those aspects of the project, I gave my collaborators — Eduardo Ortiz Frau, my sound designer, and Joel Corelitz, the composer — I tried to limit my role to vetoing certain things or insisting on certain specific things here and there. Otherwise, they had their creative leeway.