We’ve had a lot of Star Wars action games that focus on the power fantasy of being a Jedi, such as Jedi Knight II: Jedi Outcast and The Force Unleashed. I mean, it’s not like I expect someone to make a game about a Corellian baker or something. But at first glance, Respawn’s Star Wars Jedi: Fallen Order looks like its retreading familiar ground.

After an extended hands-on period with Fallen Order on PC, playing for almost four hours straight, I understand that its focus on exploration is what’s going to make the Titanfall and Apex Legends studio’s Star Wars project so exciting.

Based on what I played, Jedi: Fallen Order could become one of the greatest Star Wars games ever when it comes out November 15 for PC, PlayStation 4, and Xbox One.

Jedi: Fallen Order isn’t an open-world game, but it’s also not a linear affair. It’s akin to the likes of Metroid Prime. The world itself is not huge, and you often travel in a logical room-to-room progression, but exploring those rooms can reward you with hidden items and new areas to explore. You’ll also unlock shortcuts back to previous areas as you travel, making it easier to go back to older places. The world becomes more interconnected the deeper you go through it.

I say world, but Jedi: Fallen Order takes place on multiple planets. So I guess it’s more like Metroid Prime 3: Corruption, which had you going to multiple worlds … but come one, who compares things to Corruption instead of the original Metroid Prime?

I spent the majority of my time on Zeffo, a new planet in the Star Wars canon that Respawn has created Jedi: Fallen Order. Zeffo is an old world full of ruins. OK, as I type that … it sure sounds like the planet Tallon IV from Metroid Prime. 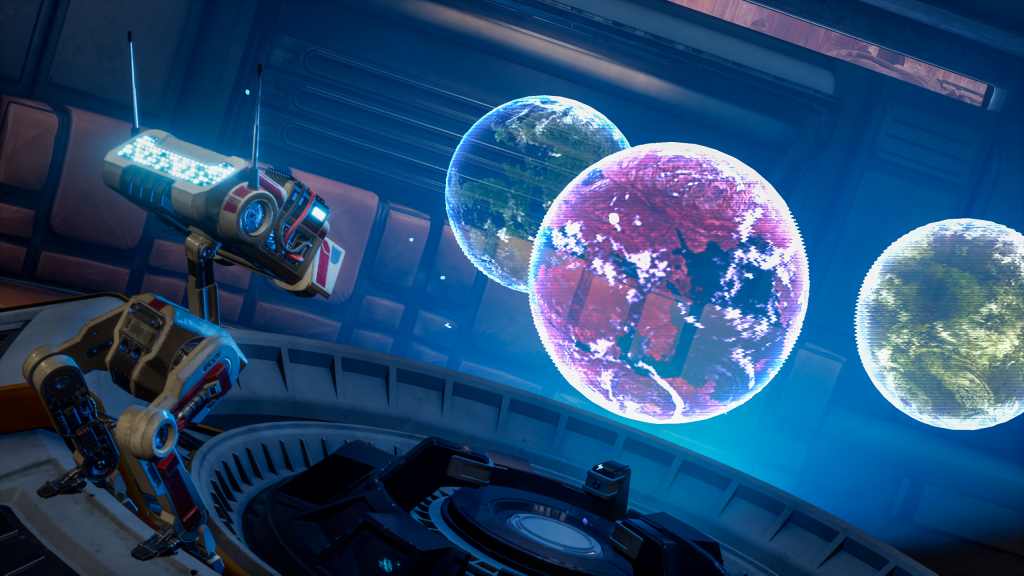 Above: You have a bunch of different planets that you can explore.

So let’s get another Metroid analogy out of the way while we’re at it. Gameplay alternates between action sequences, puzzles, and some light platforming, with the focus on exploration being the glue that ties it all together. Your curiosity can reward you with items that can increase your maximum health or Force power. You can also find objects to scan that give you some lore information and experience points, which help you unlock abilities and power-ups in a skill tree.

So while my main objective would be in one direction, I often looked for other nooks and crannies to dig into. After a fight against Stormtroopers that were shooting at me from a series of rooftops, I decided to climb up onto the buildings they were attacking me from before moving along to the next story beat. I then found some cosmetic items (you find crates that can unlock things like new appearances for your lightsaber or new outfits for the game’s hero, Cal) and a path that unlocked a shortcut to an earlier area.

You’ll also get new powers that make it possible to unlock new paths. Toward the end of my main objective on Zeffo, I unlocked the Force Push ability. Earlier in my travels on the planet, I came decrpit walls that I couldn’t get through. Force Push broke those passages open. So while I could have left Zeffo to head to a new world to continue the story, I could also keep exploring that planet and find new lightsaber parts and earn some extra experience points. The game also highlights objects that you can interact with by using the Force in blue, while things that you can’t manipulate with the Force with your current skills are in red. 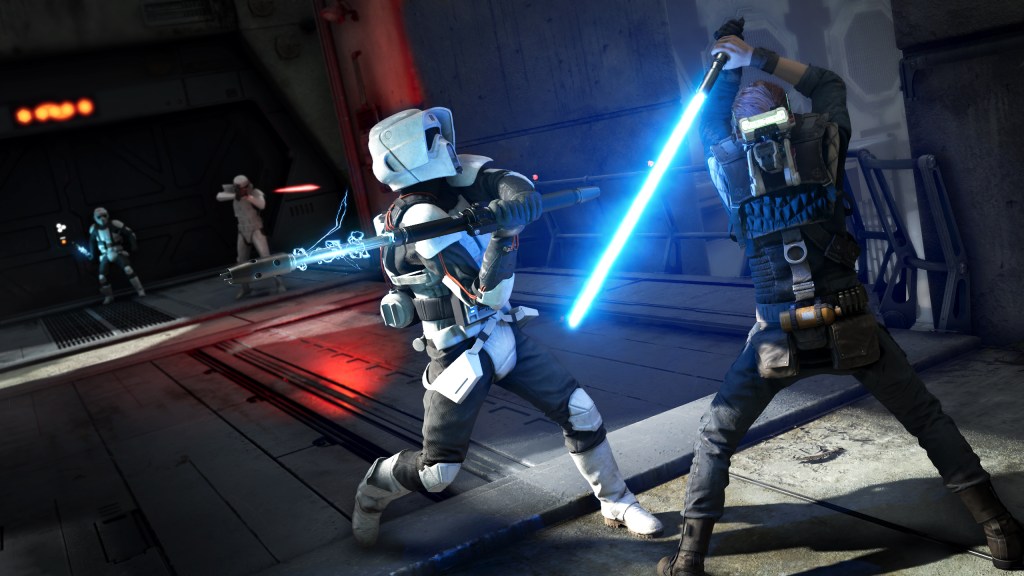 I mentioned that the game splits its focus between action, platforming, and puzzle-solving, but fighting makes up most of the experience. This a defense-focused game. If you just mindlessly swing at your enemies, they’ll deflect your attacks and leave you vulnerable. Instead, you need to look for openings, like attacking an electric baton-wielding trooper after his own laborious swing, or make one yourself by using your Force powers or parrying.

Blocking and countering are the cornerstones of combat. Holding the block button will protect you until enemies deplete your stamina bar. Tougher enemies will have their own stamina meters, which you’ll have to break down through Force powers like Force Push or through parries. You parry an attack by pressing the block button right before you’re about to get hit. If the enemy has no stamina meter, you can then counter-attack and kill them with one blow. You can time that parry button to send blaster shots back at enemies that firing at you from afar.

Look, I’ve been trying hard to not compare this combat to the kind you see in Dark Souls (I know that a lot of us sick of people comparing games to Dark Souls), but it’s a fair comparison to make. Fighting is more methodical and less about combos. The animation, however, is what makes fighting stand out. Cal’s lightsaber swings look fantastic, and weapons bounce off of each other with enough weight and force (lowercase “force” in this case) to make fights exciting and fun to watch.

Jedi: Fallen Order also has a little bit more of that Souls influence in it. I talked earlier about using experience points to unlock new abilities. Well, you can access the skill tree when you’re at specific mediation spots littered around the world. You also save your progress at them. If you die, you’re taken back to the last spot you mediated at. You also lose the experience points that you haven’t spent on the skill tree yet. You have a chance to get them back if you kill the enemy who took you down. Above: There are fouler things than Stormtroopers in the deep places of the world.

So, sure, you could call Jedi: Fallen Order something like Star Wars meets Dark Souls meets Metroid Prime. But I was also getting some strong Tomb Raider vibes, especially when my quest on Zeffo took me to a literal tomb. Just like in the recent Tomb Raider games, this section focused more on puzzle-solving. At first, I had to activate different wind tunnels to move these large metallic balls around, making them smash into walls to open new paths or trying to land them in holes to activate a rising platform.

Eventually, I unlocked Force Push inside this tomb. I was then able to move the balls around myself, which culminated in a fun and intricate puzzle where I had to move a few of the balls around a large room to activate different platforms and wind tunnels to unlock an exit. It was a puzzle that actually presented some challenge.

Jedi: Fallen Order has some obvious influences from around the gaming world, but its combining them together with the Star Wars universe to create a satisfying experience. Everything I did during my demo felt good. Controls are responsive and snappy, the user interface and menus are easy to navigate and understand, and the map makes it clear where you should be going while also showing you all of the areas you haven’t explored (and the ones you can’t access yet).

This is the kind of Star Wars game I’ve been waiting for. It’s a story-driven, exploration-friendly adventure. It’s not dark and cynical. It isn’t only about shooting or slashing. Jedi: Fallen Order is ambitious, but like Luke running through Dagobah while carrying Yoda on his back, it never feels overburdened.